Can We Predict Global Dust Storms On Mars?

Future astronauts may depend on it, and a new forecast is about to be put to the test 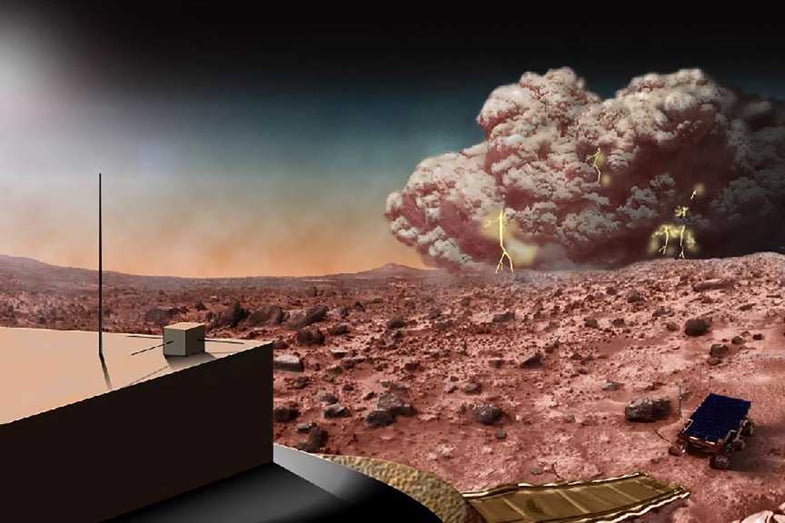 Every year, dust storms sweep over the surface of Mars. Rarely, one of these storms will grow large enough to cloak the entire planet.

This could put future astronauts in a precarious position. Martian dust storms may not be quite as fierce as the one that pummeled Mark Watney and his crewmates in The Martian, but they can rage for months, blotting out the sun and shrouding solar panels beneath a layer of dust.

Currently, there is no reliable way to tell when a planet-sized dust storm will brew. However, scientists have observed a pattern to Mars’ dust storm seasons. The red planet is likely to find itself in the grip of a global dust storm sometime in the next few months, according to a prediction made last year. If it’s right and a planet-sized storm does happen this season, it could make future storms easier to forecast.

Global dust storms are most likely to happen when Mars is at its closest point to the Sun, as rapidly moving dust in the atmosphere absorbs sunlight and gets heated up. “The more it heats up, the faster the circulation goes,” says James Shirley, a planetary scientist at NASA’s Jet Propulsion Laboratory, and author of the paper. A full-blown storm can fling dust 37 miles into the atmosphere.

Forecasting these storms is a challenge because we still don’t know very much about them. “You would think that either they should never happen or they should happen all the time, because the sunlight landing on Mars is pretty much the same…every year on Mars, just like on Earth,” Shirley says. “So what makes them happen in some years and not in others?”

If a planet-sized storm kicks up as a spacecraft approaches Mars, it could interfere with its attempt to land on the surface. “When the atmosphere is heated it kind of blows up like a balloon,” Shirley says. This means that a spacecraft could begin feeling friction from the atmosphere sooner than expected. “That can completely mess up your entry descent and landing plan.”

The winds of a global dust storm are less forceful than those of Earth hurricanes; the atmosphere is much thinner, and storm winds don’t travel faster than 60 or at most 70 miles per hour. Because Mars’ atmosphere is thinner, “the fastest [speed] we’ve ever measured would only feel like about 10 miles per hour if you’re driving around here on earth,” says Steve Hoffman, an aerospace engineer at NASA’s Johnson Space Center. “It’s not going to tip over an astronaut, it’s not going to tip over a launch vehicle.”

But a global storm could clog machinery and cut off the solar power astronauts and rovers depend on. The Spirit and Opportunity rovers waited out the last global dust storm, in 2007, by going weeks without powering up for more than few minutes a day (just long enough to keep the electronics warm and in working order).

How well astronauts can prepare for a global dust storm will depend on how well we can predict when the storms will happen and how long they are likely to last. One workaround could be using alternate power sources. The Curiosity rover, for example, uses a radioisotope power system that generates electricity from plutonium. Another would be to store power from splitting water into hydrogen and oxygen. “We would make our fuels, our stored energy while the sun is shining and then have it available if we get into a dust storm situation,” Hoffman says. Unfortunately, plutonium is radioactive and hydrogen is extremely flammable, so neither is extremely appealing to NASA.

The dust, which contains toxic compounds called perchlorates, could also find its way into suits. “Keeping it out of where the crew is actually living is something that we have to figure out,” says Richard Davis from NASA’s Planetary Science Division.

Dust that gets into the atmosphere and causes global storms is also very fine. “It’s about the size of smoke particles, and that is difficult to keep out of anything that opens and closes,” Hoffman says. “Any hatches we have, any rotating parts of a suit like the shoulder joint or the waist…that [dust] is going to probably get in there.” So the toxic dust can also potentially cause mechanical wear and tear.

The prolonged dimness might also be wearying, although a global dust storm would not cause the kind of darkness seen in polar winters on Earth. “It can be gloomy and it can last for a significant amount of time, but it’s not like you’re in total darkness 24 hours a day,” Hoffman says.

Still, we won’t know what it’s like to live through a global dust storm until astronauts encounter one. “It probably will have some impacts, but we probably aren’t going to totally know… until we actually try to do it,” Davis says.

Shirley and his colleagues believe that, as Mars’ momentum changes, so does its atmosphere, causing air circulation to constantly speed up and relax. These changes may prime Mars for global dust storms. The researchers have made predictions about these cycles in the atmosphere, then used computer models to find that more intense circulation could carry dust higher and help a dust storm “run away” and go global. All of the nine global dust storms observed on Mars took place during years when circulation was likely more intense during the dust storm season.

“Periods when Mars is speeding up and gaining momentum because of all the pulling and tugging by the other planets and the Sun seems to be a preferred situation for global dust storms to occur,” Shirley says. Among past seasons with conditions similar to this year’s, only one that he’s examined did not spawn a global dust storm.

So, investigating the impacts that gravity from the Sun and other planets have on the Red Planet’s momentum and atmosphere could help scientists come up with forecasts. Having more data taken from global dust storms will also help. So would understanding how Mars’s layer of dust, which coats only part of the planet at any given time, moves about from year to year and may sometimes settle in areas with strong winds.

Studying Mars’s monster storms could even provide insights about our own planet, Shirley says. The Red Planet has a simpler atmosphere than Earth because of its lack of oceans. “If we learned something new about the physics of what makes the atmosphere change, what causes the winds to change,” he says, “then hopefully we could apply the knowledge to the more complicated case of the Earth.”