Researchers rebuilt an image of stellar festivities in the Southern Ring Nebula. 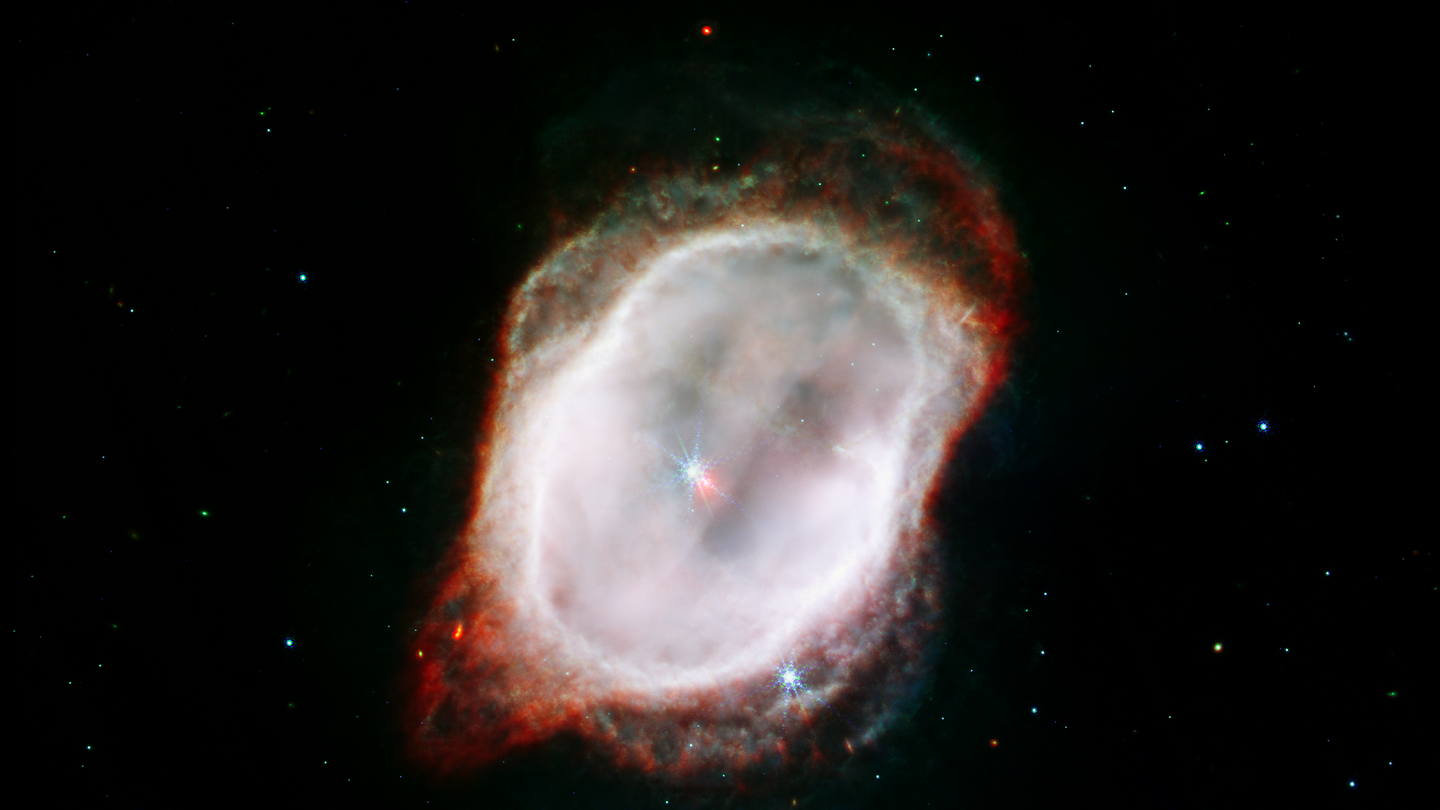 When the James Webb Space Telescope (JWST) began sending back its incredible images in July, some of the first data showed that there were at least two, and possibly three more unseen stars in the oblong, curvy shapes of the Southern Ring Nebula.

The Southern Ring Nebula is a planetary nebula, which actually doesn’t have anything to do with planets. Instead, it is the result of the implosion of a star called a red giant. According to the European Space Agency (ESA), a star swells into a red giant when a star that is a bit bigger than our sun runs out of hydrogen fuel at its core and red giants can even be hundreds of times wider than the original star. The red giant eventually sheds its outer layers, which then forms the nebula, and contracts into the cooling remnants called a white dwarf.

Now, researchers have reconstructed an image of this particular nebula roughly 2,000 light years away from Earth , that shows there were up to five stars at this ‘star party,’ but only two partying stars appear there now.

The team of almost 70 researchers led by Orsola De Marco of Macquarie University in Sydney, Australia details the findings in a study published yesterday in the journal Nature Astronomy. They began by analyzing Webb’s 10 highly detailed exposures of the Southern Ring Nebula to reconstruct the “party scene.” According to NASA, it’s common for small groups of stars that span a range of masses to form together and continue to orbit one another as they get older. The team used this principle to travel back in time thousands of years to figure out what might explain the shapes of the colorful clouds of gas and dust in this nebula.

They found that possibly more than one star in the nebula interacted with the dimmer of the two central partying stars (shown in red), before that star created this planetary nebula. “The first star that ‘danced’ with the party’s host created a light show, sending out jets of material in opposite directions. Before retiring, it gave the dim star a cloak of dust. Now much smaller, the same dancer might have merged with the dying star – or is now hidden in its glare,” writes the team at NASA.

Adding to the mix, a third partygoer may have gotten close to the central star several times. That star then stirred up the jets ejected by the first companion, which helped form the wavy shapes at the edges of the gas and dust in the nebula. The fourth star didn’t want to be left out, and contributed to the celebration with its wider orbit. It then circled the scene, stirring up the gas and dust, creating the big system of rings on the outside the nebula. The fifth star is the best known and life of the party. It’s the bright white-blue star that continues to orbit the gathering “predictably and calmly.”

In addition to taking a peek at the star party, the team also accurately measured the mass that the central star had before it shed layers of gas and dust. They estimate that the star was about about three times the mass of the sun before it created this specific planetary nebula. After ejecting the dust and gas, it was about 60 percent of the sun’s mass.

According to NASA, this is some of the first published research regarding some of the first images taken by the JWST to be published, so more details and findings are likely to be released. It also shows the first time that images taken with JWST’s NIRCam and Mid-Infrared Instrument (MIRI), were paired with existing data from the ESA’s Gaia observatory. This data enabled the team to precisely pinpoint the mass of the central star before it created the nebula.