What's cooler than being cool? This ultra-cold X-ray beam. 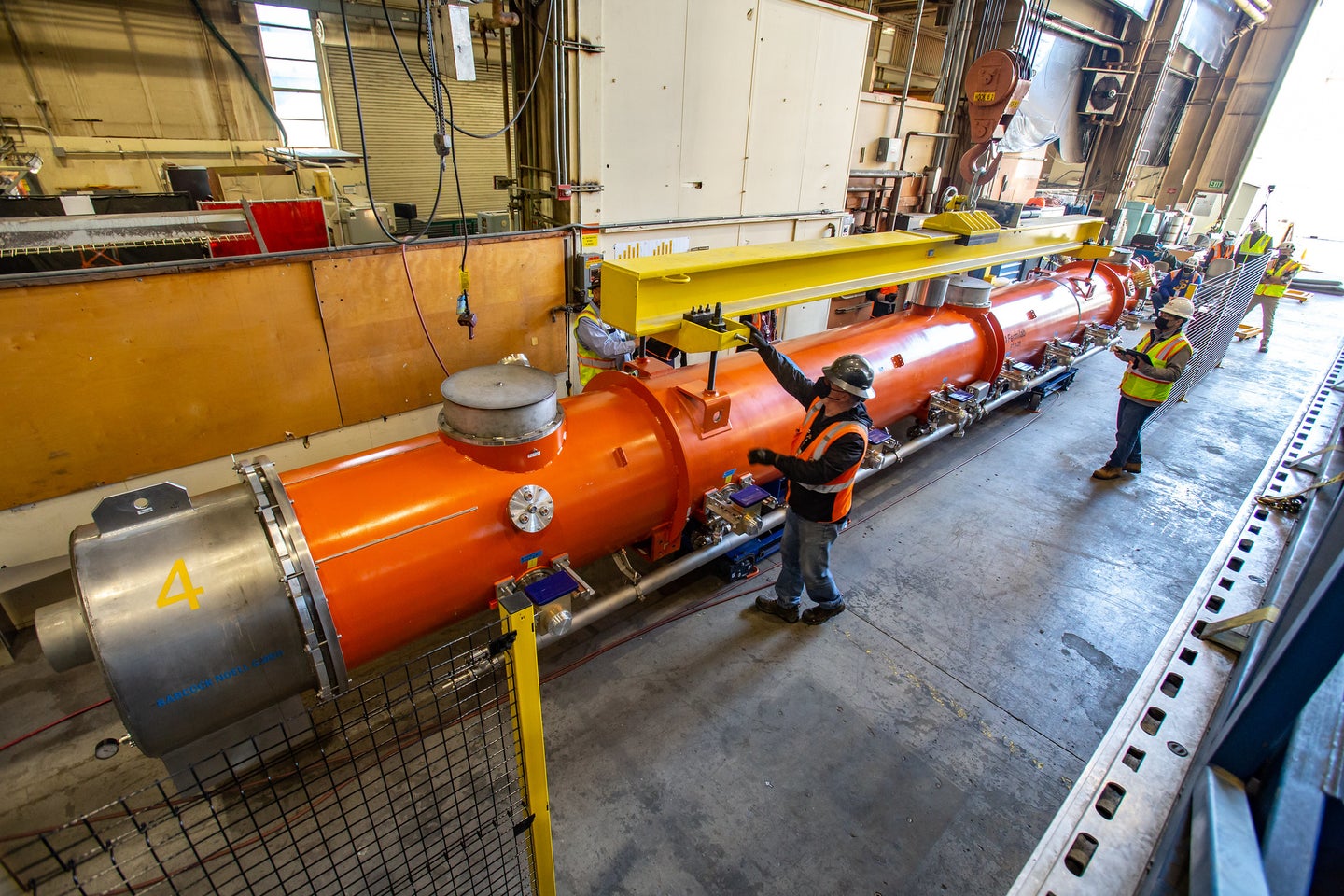 The physics world is rallying around CERN’s Large Hadron Collider, now coming online after a lengthy upgrade and a yearslong pause. But that isn’t the only science machine to literally receive new energy. Nearly 6,000 miles away, on the other side of the globe, another one is undergoing its final touches.

The SLAC National Accelerator Laboratory, south of San Francisco, is home to a large laser called LCLS, which lets scientists use X-rays to peer into molecules. “The way to think about a facility like LCLS is really as a super-resolution microscope,” says Mike Dunne, the facility’s director.

Now, LCLS has just finished a major upgrade—called LCLS-II—that plunges the laser down to just a few degrees above absolute zero.

A half-century ago, SLAC’s tunnel housed a particle accelerator. While most particle accelerators today send their quarry whirling about in circles, this accelerator was perfectly straight. To bring electrons up to speed for smashing, it had to be over 2 miles long. For decades after it opened, it was the “longest building in the world.” (The tunnel is so distinctive, a miles-long straight line carved into foothills, that pilots use it for wayfinding.)

When it came online in 1966, this so-called Stanford Linear Accelerator was an engineering marvel. In the following decades, the particle physics research conducted there led to no fewer than three Nobel prizes in physics. But by the 21st century, it had become something of a relic, surpassed by other accelerators at CERN and elsewhere that could smash particles at far higher energies and see things Stanford couldn’t.

But that 2-mile-long building remained, and in 2009, SLAC outfitted it with a new machine: the Linac Coherent Light Source (LCLS).

LCLS is an example of an apparatus called an X-ray free-electron laser (XFEL). Although it is a laser, it doesn’t have much in common with the little handheld laser pointers that excite kittens. Those create a laser beam using electronic components such as diodes.

An XFEL, on the other hand, has far more in common with a particle accelerator. In fact, that’s the laser’s first stage, accelerating a beam of electrons to very near the speed of light. Then, those electrons pass through a gauntlet of magnets that force them to zig-zag in rapid switchbacks. In the process, the electrons shoot their vast energy forward as X-rays.

Doing this can create all sorts of electromagnetic waves from microwaves to ultraviolet to visible light. But scientists prefer to use X-rays. That’s because X-rays have wavelengths that are about the size of atoms, which, when focused in a powerful beam, allow scientists to peer inside molecules.

[Related: Scientists are putting the X factor back in X-rays]

LCLS is different from most of the other X-ray sources in the world. The California beam works like a strobe light. “Each flash captures the motion of that molecule in a particular state,” says Dunne.

LCLS could originally shoot 100 flashes per second. That allowed scientists to make, say, a movie of a chemical reaction as it happened. They could watch bonds between atoms form and break and watch new molecules. It may soon be able to make movies with frame rates thousands of times faster.

In its first iteration, LCLS used copper structures to accelerate its electrons. But increasing the whole machine’s power was pushing the limits of that copper. “The copper just is pulling too much current, so it melts, just like when you fuse a wire in your fuse box,” says Dunne.

There’s a way around that: the bizarre quantum effect called superconductivity.

When you lower a material past a certain critical temperature, its electrical resistance drops off to virtually nothing. Then, you can functionally get current to flow indefinitely, without losing energy to its surroundings, as heat.

LCLS is far from the first laser to use technology like this. The problem is that getting to that temperature—typically just a few degrees above absolute zero—is no small feat.

“It gets really hard to support these cryogenic systems that cool to very low temperatures,” says Georg Hoffstaetter, a physicist at Cornell University who had previously worked on the technology. There are superconducting materials that operate at slightly less unforgiving temperatures, but none of them work in spaces that are hundreds of feet long.

A smaller facility might have been fazed by this challenge, but SLAC built a warehouse-sized refrigerator at one end of the structure. It uses liquid helium to cool the accelerator down to -456°F.

Superconductivity also has the bonus of making the setup more energy-efficient; large physics facilities are notorious for using as much electricity as small countries do. “The superconducting technology in itself is, in a way, a green technology, because so little of the accelerator power gets turned into heat,” says Hoffstaetter.

When the upgrades are finished, the new and improved LCLS-II will be able to deliver not just 100 pulses a second, but as many as a million.

What to do with a million frames per second

Dunne says that there are, roughly, three main areas where the beam can advance science. For one, the X-ray beam can help chemists sort out how to make reactions go faster using less material, which could lead to more environmentally friendly industrial processes or more efficient solar panels.

For another, the tool can aid biologists doing things like drug discovery—looking at how pharmaceuticals impact enzymes in the human body that are hard to study via other methods.

For a third, the beam can help materials scientists better understand how a material might behave under extreme conditions, such as an X-ray barrage. Scientists can also use it to design new substances—such as even better superconductors to build future physics machines just like this one.

Of course, there’s a catch. As with any major upgrade to a machine like this one, physicists need to learn how to use their new tools. “You’ve sort of got to learn how to do that science from scratch,” says Dunne. “It’s not just what you did before…It’s an entirely new field.”

One problem scientists will need to solve is how to handle the data the laser produces: one terabyte, every second. It’s already a hurdle that large facilities face, and it’s likely to get even more acute if networks and supercomputers can’t quite keep up.

Even so, this hasn’t diminished physicists’ enthusiasm for enhancement. Scientists are already plotting yet another update for the laser, set for later in the 2020s, which will boost its energy and allow it to probe even deeper into the world of atoms.