It's official: the next big telescope will launch in October 2018 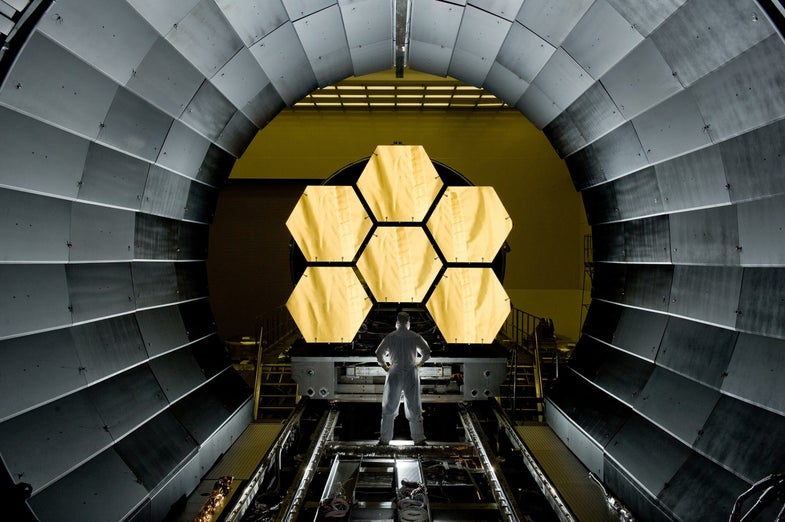 JWST's 21-foot mirror will be composed of 18 mirror segments that collect light from around the time of the birth of the universe. NASA/MSFC/David Higginbotham
SHARE

Move over, Hubble. When it launches, the James Webb Telescope will help us see further back in time than ever before, collecting light from the first galaxies that formed during the birth of the universe. It will shed light on how solar systems evolve over time, and maybe even give us a closer look at what’s going on on planets around other stars.

After many delays and huge budget inflations, JWST finally has a launch date. The European Space Agency–which is collaborating with NASA, the Canadian Space Agency, and the Space Telescope Science Institute on JWST–has finally booked a launch for the 21-foot telescope. JWST will fly on an Ariane 5 rocket that launches out of French Guiana in October 2018.

Although 2018 has been the telescope’s projected launch date for several years now, signing a launch contract is kind of like the difference between saying you’re going to Thailand next summer and actually buying your plane ticket. Sh*t’s getting real.

That’s a little bit of a relief, considering the telescope almost met the chopping block. Originally slated to launch in 2007 at a cost of half a billion dollars, the project has been plagued by delays and rising costs. In 2011, Congress almost killed the project to shave down NASA’s budget, but instead they capped funding at $8 billion.

Now, finally, JWST will launch 11 years late and at a total cost of $8.8 billion.

And after that, it’s time to start thinking about the next big space telescope, projected to launch sometime in the 2030s. What kind of telescope it could be is till up for decision, but the High-Definition Space Telescope is one option.

The 2030s are long way off, but it’s never too early to start planning–and budgeting.