The spectacular scope launches in 2019. 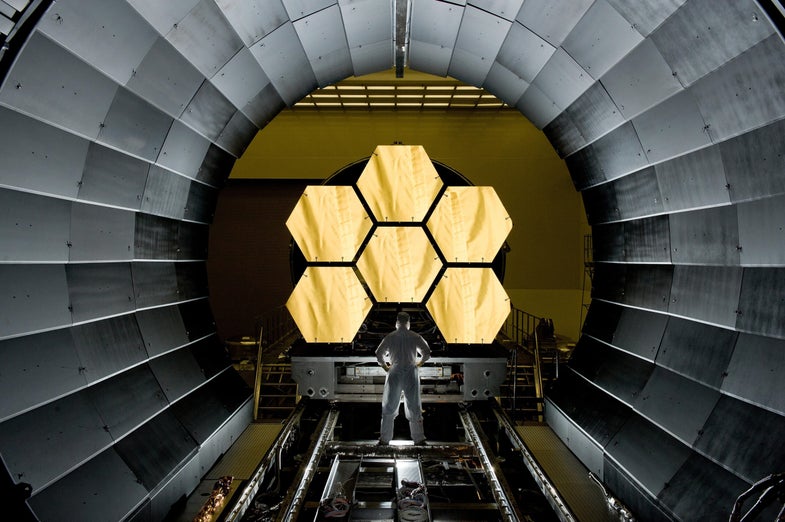 The James Webb Space Telescope took decades to build. It won’t launch until 2019 at the earliest, it’s slowly but surely making its way toward that distant date, after which it will finally get a chance to capture those first glimpses of galaxies forming in the early universe.

It was first assembled at Goddard, and then headed down to NASA’s Johnson Space Center for testing in a massive cryogenic vacuum chamber to evaluate its ability to endure the cold vastness of space. For the engineers waiting to see their creation ascend to the heavens, these steps must seem to drag on forever. But you can watch the highlights of the telescope’s nine-month stint in Houston in two minutes in the time lapse above.

Assembling such a massive, expensive, and delicate instrument takes a lot of effort. To give you a sense of just how much larger than life this project truly is, here’s JWST by the numbers:

At the Johnson Space Center, engineers reassembled the telescope and then gingerly slid it into Chamber A, a massive vacuum chamber, on July 10. It went through a gamut of tests in the unthinkable cold for about 100 days. Speaking of those low temperatures…

Thanks to delays and budget overruns, the JWST now costs well over $8 billion dollars.

The total size of JWST’s mirror. Made up of 18 hexagonal sections of gold-coated beryllium, the mirror will be able to capture even faint lights from billions of light years away.

The gold coating on the JWST’s mirrors is really thin. If you scrunched it all up it would weigh 48.25 grams, or, according to NASA, roughly the mass of a golf ball.

The JWST will orbit the sun at a stable Lagrange point one million miles from Earth. At that position, the satellite will stay in line with the Earth as we orbit the sun.

Once in position, NASA hopes that the telescope will operate for somewhere between five and 10 years. During that time it will examine the atmospheres of exoplanets, and peer back in time to the early days of the universe, watching as the first stars, galaxies, and planetary systems come into being before its eyes.