The powerful telescope uses infrared light to produce a detailed image of the far-off gas giant. 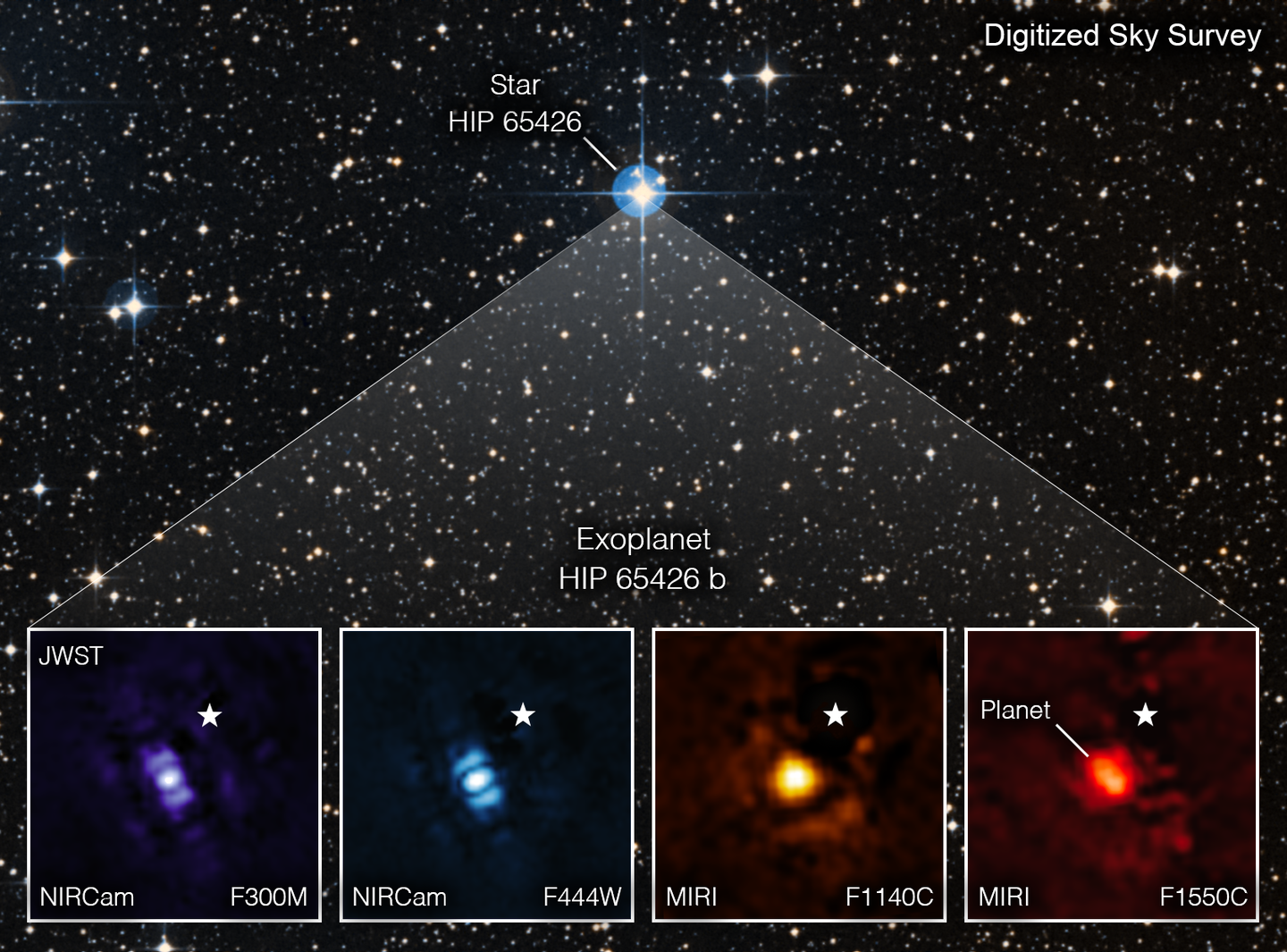 The first image of an exoplanet captured by the James Webb Space Telescope. Credit: NASA/ESA/CSA, A Carter (UCSC), the ERS 1386 team, and A. Pagan (STScI).
SHARE

For the first time ever, astronomers at NASA, the European Space Agency (ESA), and Canadian Space Agency (CSA) captured a direct image of an exoplanet using the James Webb Space Telescope. Extra solar planets, or exoplanets, are planets that exist outside of our solar system.

Researchers are currently analyzing the new data from these observations and are working on a paper for peer review. The findings are currently published in a preprint. But Webb’s first capture of an exoplanet already hints at future possibilities for studying distant worlds.

JWST captured the image of the inhabitable gas giant called HIP 65426 b located about 385 light-years away from Earth. It is roughly six to 12 times the mass of Jupiter (our solar system’s biggest planet) and astronomers believe that their observations could help narrow down that estimate. Compared to 4.5 billion-year-old Planet Earth, HIP 65426 b is only 15 to 20 million years-old, so still a young one as far as planets go.

“This is a transformative moment, not only for Webb but also for astronomy generally,” said Sasha Hinkley, associate professor of physics and astronomy at the University of Exeter in the United Kingdom, who led these observations with a large international collaboration, in a NASA blog.

The image released by NASA/ESA/CSA shows the exoplanet through four different light filters. Unlike the human eye, JWST can see the universe in infrared light, which gives astronomers more precise measurements of an exoplanet’s mass and temperature and can even detect clouds moving in a distant planet’s sky. The infrared light pointing the way to future observations that will reveal more information than ever before about exoplanets.

JWST’s Near-Infrared Camera (NIRCam) and Mid-Infrared Instrument (MIRI) have coronagraphs. These are sets of tiny masks that can block out starlight and enable the telescope to take direct images of certain exoplanets like HIP 65426 b. NASA’s Nancy Grace Roman Space Telescope, which is scheduled to launch this decade, will demonstrate an even more advanced coronagraph.

“It was really impressive how well the Webb coronagraphs worked to suppress the light of the host star,” said Hinkley.

While this specific image is new to astronomers, HIP 65426 b is not. The exoplanet was first detected in 2017 using the SPHERE instrument located at the European Southern Observatory’s (ESO) Very Large Telescope in northern Chile. The ground-based telescope took images of the exoplanet using short infrared wavelengths of light. JWST is able to capture longer infrared wavelengths, revealing some new details that ground-based telescopes can’t necessarily see due to the intrinsic infrared glow of Earth’s atmosphere.

While more than 5,000 exoplanets have been discovered, taking direct images of them is incredibly challenging. Exoplanets revolve around a star just like Earth revolves around the sun, and those stars are typically much brighter than planets. According to NASA, HIP 65426 b is more than 10,000 times fainter than its host star in the near-infrared and a few thousand times fainter in the mid-infrared.

[Related: Newly discovered exoplanet may be a ‘Super Earth’ covered in water.]

In each filter image, HIP 65426 b appears as a slightly differently shaped blob of light due to how JWST’s optical system translates light through the different optics.

“Obtaining this image felt like digging for space treasure,” Aarynn Carter, a postdoctoral researcher at the University of California, Santa Cruz, who led the analysis of the images said in the NASA release. “At first all I could see was light from the star, but with careful image processing I was able to remove that light and uncover the planet.”

While this is not the first direct image of an exoplanet taken from space, these images of HIP 65426 b points the way forward for JWST’s exciting exoplanet exploration.

“I think what’s most exciting is that we’ve only just begun,” said Carter. “There are many more images of exoplanets to come that will shape our overall understanding of their physics, chemistry, and formation. We may even discover previously unknown planets, too.”