The magpie-sized Yuanchuavis probably wasn’t a strong flyer, but it did dress to impress. 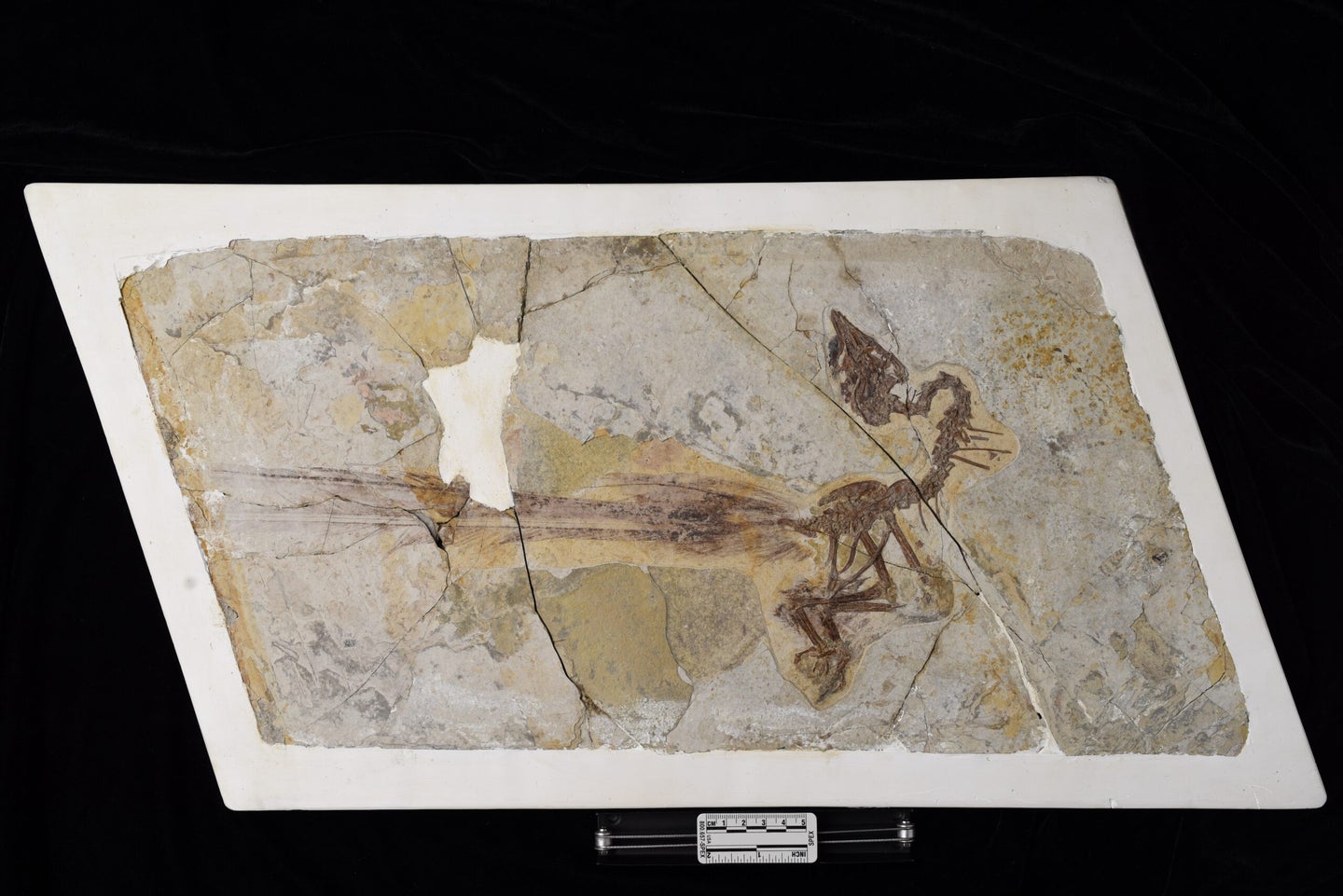 When it’s time to impress a potential mate, many birds rely on their eye-popping plumage.

Some of these displays are so lavish that they actually become a hindrance, including the enormous tails of some peacocks and male birds-of-paradise (a group of birds found mostly in Australia, Indonesia, and Papua New Guinea). It turns out this strategy has been successfully getting birds laid for a very, very long time.

This week, paleontologists reported the discovery of a fossilized bird approximately 120 million years old that boasts one of the earliest known examples of an elaborate display called a pintail. The tail had a short fan at the base and two central feathers that were longer than its body, reminiscent of those seen on some modern birds such as quetzals.

“The tail feathers are really the kicker for this specimen,” says Jingmai O’Connor, the associate curator of fossil reptiles at the Field Museum of Natural History in Chicago. “We can hypothesize that because these things would have made it more difficult to move around, then they must be an ornamental feature.”

O’Connor and her colleagues described the new species, which they named Yuanchuavis kompsosoura after a Chinese mythological bird, on September 16 in Current Biology.

Yuanchuavis would have been roughly magpie-sized and belonged to an extinct group called enantiornithines that were the dominant birds during the Cretaceous Period. Most were small and probably lived in trees, similar to today’s songbirds, O’Connor says.

Yuanchuavis is also part of the Jehol Biota, a rich array of well-preserved fossils from northeastern China. The fossil that O’Connor and her team analyzed was missing its arms but otherwise in excellent shape, she says, with “fantastic, beautifully preserved” tail feathers.

The fan of feathers at the base of its tail would have resembled those typically observed in present-day birds such as pigeons or sparrows. This aerodynamic shape would have helped to generate lift, enhancing Yuanchuavis’s flying prowess. By contrast, the pair of elongated plumes in the middle of the tail would have increased drag, making it harder for Yuanchuavis to maneuver on the wing. “These feathers are big, they’re clumsy,” O’Connor says.

The researchers were also able to examine pigment-containing structures called melanosomes in the feathers. The shapes of the melanosomes that O’Connor and her colleagues found in Yuanchuavis’s tail fan and ornamental plumes resemble those that produce gray and black coloration, respectively, in modern birds.

But that doesn’t mean the ancient birds weren’t brightly colored. Feathers also have microscopic keratin structures that can reflect different light wavelengths, such as the ones in blue jay feathers that absorb every wavelength except blue. Unfortunately, keratin decays quickly and is rarely preserved in fossils, so Yuanchuavis’s true coloration will likely always be a mystery.

The skeletons of prehistoric birds lacked many of the specialized traits that allow today’s birds to undertake thousand-mile migrations and other aerial feats. The fact that Yuanchuavis invested in such luxurious but cumbersome tail feathers, rather than evolving a tail that would make it easier to fly, is telling. It demonstrates how important sexual selection was in shaping the plumage of early birds, O’Connor says.

Yuanchuavis’s extravagant plumage also provides a clue about the kind of habitat it dwelled in. Modern seabirds typically don’t have much in the way of ornamentation; they live in an exposed environment and must be strong flyers.

But forest birds can afford to be showy. “There’s no point in being optimized for being a really good flyer,” O’Connor says. “You’re in this dense vegetated environment where you only really need to flutter over to a tree branch to get out of the way.”

Yuanchuavis lived around the dawn of flowering plants, so its forest probably didn’t have the lush closed canopies that exist today. Still, O’Connor says, the fossil highlights how ancient birds responded to the same environmental and reproductive pressures faced by their present-day relatives.

She and her team are now investigating Yuanchuavis’s skull, particularly the palate. They’re hoping to understand how modern birds developed the ability to move the upper bill relative to the braincase, which is known as cranial kinesis and allowed them to manipulate a wider variety of food.

“There’s a lot of unique things that happen to the avian skull during the evolution of birds that this primitive enantiornithine will hopefully shed light on,” O’Connor says.