The motion of the ocean(ic crust). 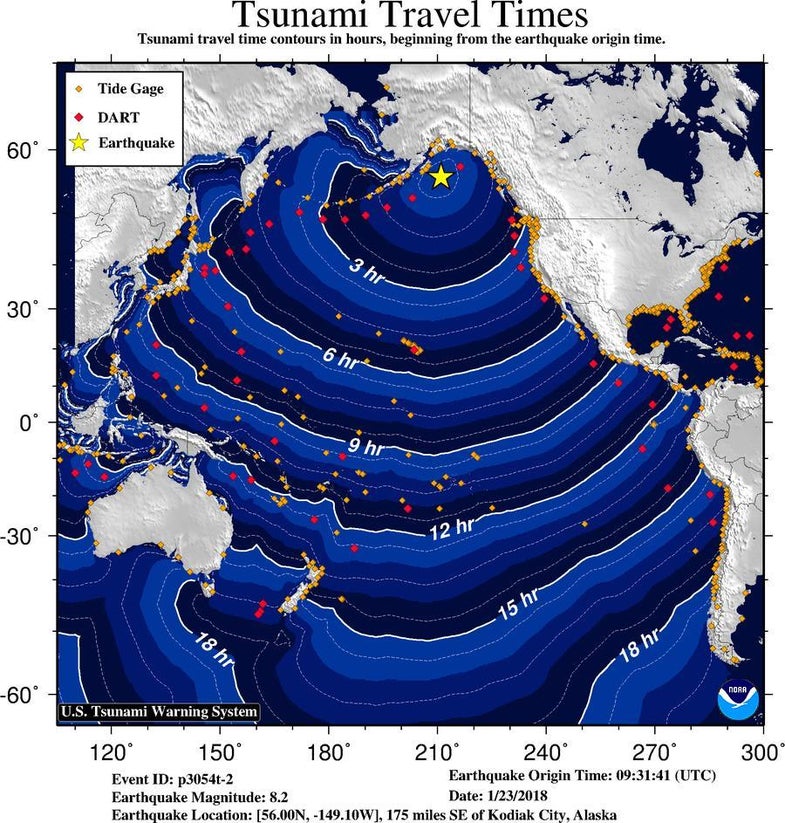 It started in the early hours of the morning, 31 minutes after midnight in Alaska. The shaking lasted for half a minute in places, rattling land hundreds of miles away from its underwater origins. Then came the sirens, screaming a warning for people to leave their homes and beds and head for higher ground—the quake happened out in the Pacific, and there was a chance that a tsunami was on the way.

When the Tsunami Warning System issued its first alert four minutes after the magnitude 7.9 earthquake struck, the agency didn’t have a lot of information about how the earth had shifted, 15.5 miles under the surface of the ocean. But it had enough to start predicting when a tsunami might arrive at different locations up and down the West Coast, and issue a tsunami watch for those areas—an alert letting people know to stay vigilant.

It also had enough information to issue a tsunami warning to British Columbia and much of the coast of southern Alaska, areas that would be hit first if a large wave originated over that particular earthquake’s epicenter.

So why didn’t the West Coast see a giant wall of water?

Many tsunamis, even the big ones, look like fast-moving floods, not giant waves. “The tsunami may appear as water moving rapidly out to sea, a gentle rising tide like flood with no breaking wave, as a series of breaking waves, or a frothy wall of water,” the National Tsunami Warning Center says.

In this case, a big wave did show up—but not with any kind of destructive power. Its maximum height registered at just 0.7 feet at 3:38 a.m. in Old Harbor, Alaska.

That’s not because the earthquake that started it all was weak. The quake still shook homes hundreds of miles away. But strength isn’t the only thing that determines whether or not a tsunami will occur. It also depends on how the strong force moves.

In this case, two sides of the oceanic crust moved past each other horizontally in what’s called a strike-slip fault, similar to what you see on the San Andreas out in California, where parts of the crust slide past each other.

The quake was really large and shallow, both factors that make tsunamis more likely when earthquakes strike near the coasts. But because the break wasn’t moving up or down dramatically, the water above the violent crack didn’t get displaced (much), and the tsunami stayed small.

Many tsunami-causing earthquakes happen at or near tectonic boundaries, where segments of the Earth’s crust intersect. They may pull apart or slide past each other, and often they collide, shoving one underneath the other. All can cause earthquakes, but the latter can lead to the vertical displacement that causes tsunamis. The 1964 magnitude 9.2 earthquake that devastated parts of Alaska occurred on a subduction zone near the present quake, where part of the Pacific plate slid under the North American plate with such violence that it caused the second-largest tsunami ever recorded, killing 119 people.

This earthquake, on the other hand, happened within the Pacific plate, not right at its edge. The plate here is fractured, and parts of it can move like they did on Monday, sliding past each other with a jolt.

Just because this didn’t result in a massive tsunami does not mean that the watches and warnings were unnecessary, or even that they were false alarms. A tsunami did in fact hit parts of Alaska, it was just so small that it wasn’t all that visible except to scientific instruments.

People in the warning zone evacuated to buildings on higher ground, and people further down the West Coast were urged to stay alert and listen for instructions until they got the all-clear. The watches and warnings were lifted as soon as researchers at the National Tsunami Warning Center had enough data to know that people were safe.

Sure, it’s annoying to be unceremoniously woken from your slumber early in the morning, gathering your family into the car only to have the thing you’re running from turn out to be a small sloshing in the harbor. But next time the shaking could turn out to be a normal or reverse fault, which can have a strong up-or-down motion, and that same 7.9 earthquake could send a much larger surge of water rushing toward the shore.

That’s why evacuating and paying attention to warning systems is crucial in this kind of emergency. When it comes to tornadoes, tsunamis, or any of the other disasters that we can actually forecast, knowing what to do with that warning can save your life.

In the event of a tsunami warning, experts advise listening to your local and regional officials and heading to high ground as soon as you’re told to evacuate. Above all, stay away from the water and the coastline. In some cases, the water may retreat suddenly before the wave hits. It looks incredible, but it’s not worth risking your life to investigate. Communities in tsunami-prone areas likely have designated spots to gather. Find out which are closest to where you live and work, and what’s the best way to get there. You’ll be glad you did the next time the sirens go off.