But they aren't the deadliest energy source for our feathered friends 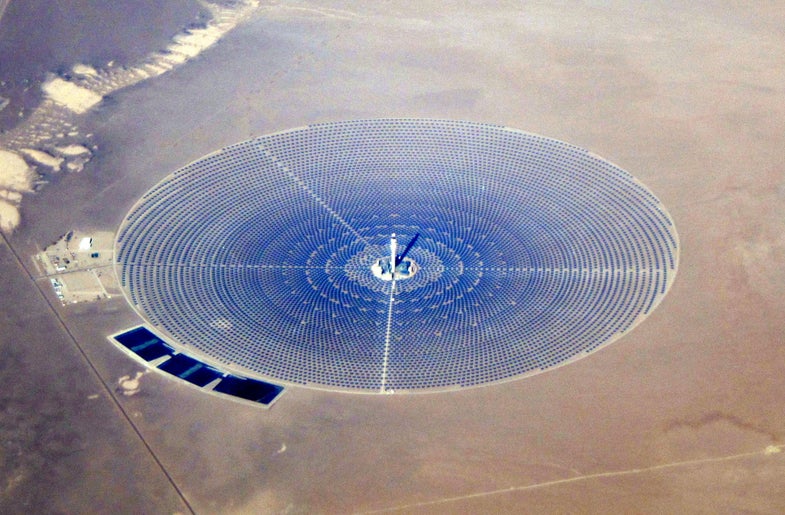 The Crescent Dunes Solar Energy Project in Nevada is set to come online in March. Once completed, it will use thousands of mirrors to focus sunlight on a tower, melting millions of pounds of salt contained inside. The molten salt will heat water into steam, which then turns turbines and generates electricity without any carbon byproducts. There’s just one little problem: During a test run on January 14, the intense heat from the mirrors reportedly incinerated and/or vaporized more than 100 birds.

Rewire reports that during the test, operators fired up a third of the 110-megawatt facility’s mirrors, concentrating sunlight on a spot 1,200 feet off the ground. Over a six-hour period, biologists counted 130 “streamers,” or trails of smoke and water left behind as birds ignited and plummeted to their deaths. Rewire‘s anonymous source said that at least one of the birds “turned white hot and vaporized completely.”

Another solar power plant, Ivanpah, reportedly scorches one bird every two minutes. Both companies are trying to devise measures to keep birds out of the concentrated solar energy.

It’s certainly a gruesome way to die. But solar power plants may not be that much worse for birds than other sources of electricity. This graph from a U.S. News & World Report in 2014 shows that overall, fossil fuels cause a lot more feathered fatalities.

However, the chart is not a perfect data source. The estimates weren’t taken in any standardized way, and some of the studies were outdated. It’s also not an apples-to-apples comparison, since fossil fuels supply way more power to U.S. homes than renewable sources. So we combined the chart with data from the U.S. Energy Information Administration to calculate how many birds each type of power kills for every 1,000 megawatt-hours of power that’s generated. It’s just a back-of-the-envelope calculation, but here’s what we found: 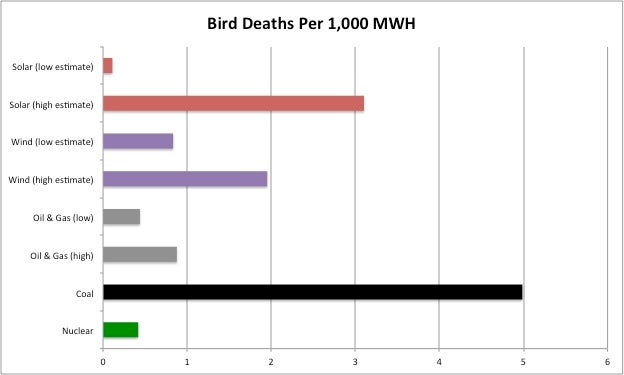 Coal still stands out as the big bad bird killer, but solar and wind power aren’t so angelic either. If you accept the higher estimate for solar power, the impact on our feathered friends is higher than for oil and natural gas. Does that mean we should stick to fossil fuels? Of course not. (A world scorched by climate change is good for nobody.) But it does underline the fact that clean energy needs to clean up its act.