Are hyperbaric chambers really a fountain of youth?

Hyperbaric spas say their treatments are based on science—but the evidence is thin. 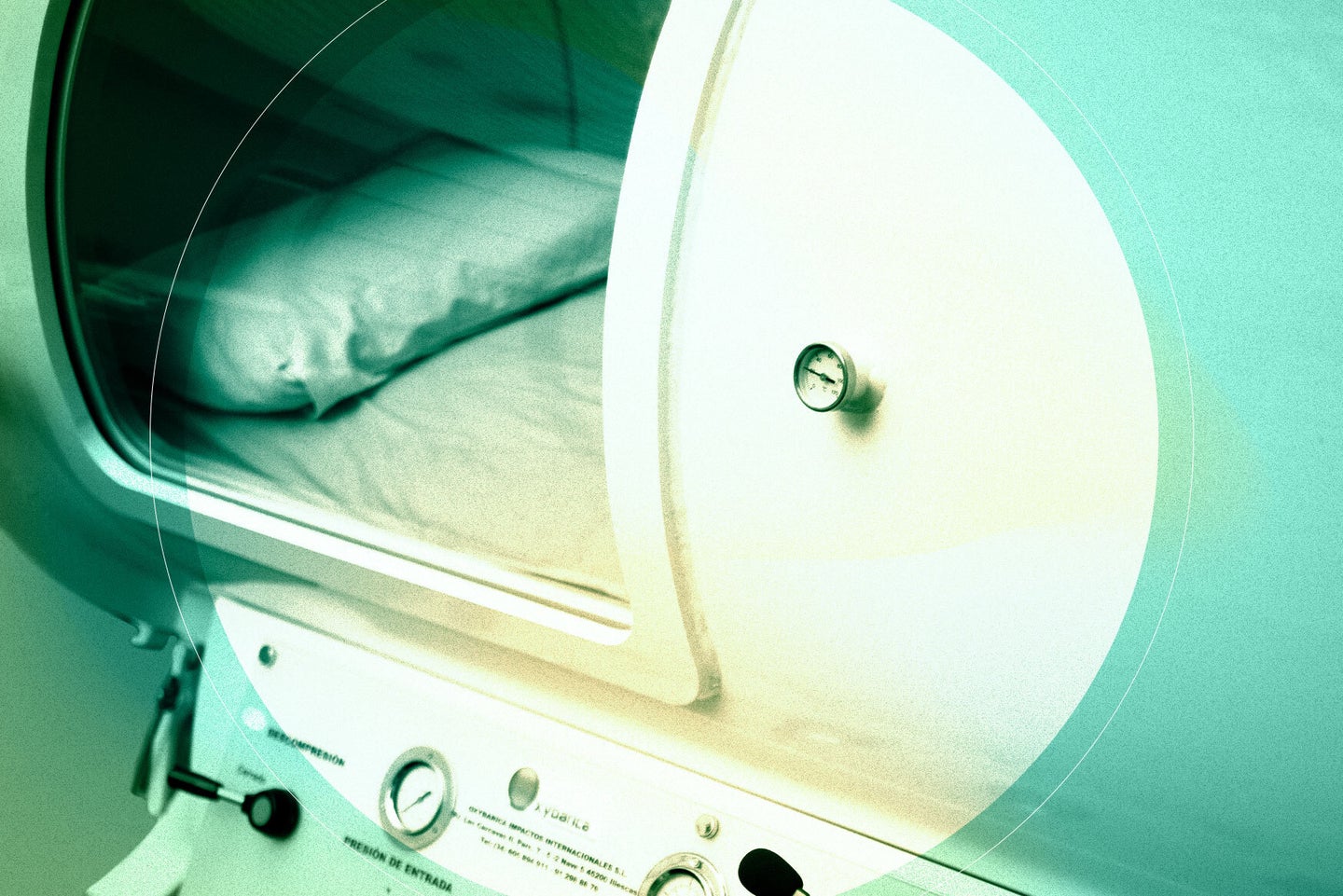 Aging is an inevitable part of having a body. But humans have spent centuries trying to reverse this natural process. Numerous treatments promising to rewind the clock—renew your skin, sharpen your brain, release the achiness in your joints and muscles—have targeted consumers seeking a youthful look. The latest attempt at revitalizing the human body relies on an old, bizarre, and somewhat scary-looking device called a hyperbaric chamber. An increasing number of health spas and specialized medical facilities are offering hyperbaric oxygen therapy (HBOT), which involves crawling into a pressurized chamber and breathing in pure oxygen to allegedly promote circulation and heal damaged tissues. For $400 per hour (and up), some HBOT facilities market it as a cure-all for aging related afflictions, from fatigue to poor eyesight. Celebrities from Michael Phelps to Justin Bieber swear by it, and an increasing number of wealthy “wellness-seekers” are buying HBOT chambers for their own homes, at a hefty price tag of $20,000. Forbes called it one of the wellness trends to watch in 2021.

But experts caution those eager to jump in on the HBOT wellness trend. They say that there’s a lack of strong evidence showing this pricey treatment has any effects on aging. Plus, while hyperbaric oxygen therapy can be safe when done properly, when it’s not, it can be incredibly dangerous, and the emerging market for spa treatments and at-home devices is highly unregulated.

HBOT isn’t new to the medical world—or, for that matter, to the so-called wellness world. In 1662, British physician Nathaniel Henshaw pressurized the air within a chamber, and proposed the device, which he called a “domicilium,” as a treatment for a number of ills, from respiratory diseases to digestive problems. By the 19th century, hyperbaric chambers were all the rage among Parisian elites, who believed that compressed air promoted circulation, eased pain, and provided an overall sense of wellbeing.

At the beginning of the 20th century, doctors began using the centuries-old therapy to successfully treat decompression sickness, colloquially called “the bends,” a life-threatening condition that can afflict divers and underwater workers as they resurface. The drop in pressure causes nitrogen bubbles to build up in the blood, and block its flow, leading to symptoms ranging from confusion to paralysis. For people suffering from the bends, HBOT shrinks the bubbles and forces nitrogen out of their blood.

It’s also well-established that HBOT does promote healing—but only for very specific conditions. One example is in people with chronic wounds that stop receiving enough circulation, such as diabetic foot ulcers and radiation injuries. In healthy people, when a body part gets injured, like a cut or a broken toe, the ensuing sudden loss of circulation to the tissue area tells the body to send its healing resources there. But in people with chronic wounds, the loss of blood flow occurs gradually across the body’s tissues. “It’s more of a gradual obliteration of your blood vessels, so your body gets fooled,” says Enoch Huang, the medical director of hyperbaric medicine and wound healing at Legacy Emanuel Medical Center in Portland, Oregon.

In these patients, HBOT suddenly increases oxygen concentrations in the healthy parts of the body, but not as much in the wounded areas. That differential acts like a wake up call, telling the patient’s body that something is wrong in the area that’s still not receiving much oxygen. Armed with an increased oxygen supply, their immune and regenerative systems get to work fighting infection and building new blood vessels.

If HBOT can kickstart the immune system of someone who is sick or wounded and tell their body to heal damaged tissue, shouldn’t it be good for those of us who just want to avoid the more unpleasant effects of aging?

Experts say it’s not so simple. “People think that if it’s good for one thing, it must be good for another,” says Marc Robins, a hyperbaric medicine specialist at Utah Valley Wound Care and Hyperbaric Medicine Center. The Undersea and Hyperbaric Medical Society recognizes fourteen different treatment indications for HBOT, most of them complex wounds, from gangrene to brain infections. “Everything else is just wishful thinking until we actually provide the evidence,” Robbins adds.

At the center of this research is Shai Efrati, director of the Sagol Center for Hyperbaric Medicine in Tel Aviv. Over the past ten years, his research group has authored dozens of studies on using HBOT for a myriad of conditions, including cognitive decline and aging. “It’s impressive,” Robins says, “they’re pumping out a very large volume of studies.”

It’s Efrati’s research that most hyperbaric spas and clinics cite to back their claims—in particular one 2020 study, published in the journal Aging, in which HBOT appeared to lessen some of the cellular changes associated with aging. In this study, Efrati’s team administered HBOT to thirty-five adults aged 64 and older every day for 60 days. They were interested in the length of telomeres, the caps on the ends of our chromosomes, which shorten with each cell division. Shorter telomeres are associated with cell death. “They function as biological clocks,” says Daniel Belsky, a professor of epidemiology who researches biological markers of aging at Columbia University.

At the end of the study, Efrati’s team analyzed tissue samples from their participants—and indeed, they found longer telomeres and fewer dying cells. Spas and clinics use these results to claim that HBOT “reverses aging.” For that matter, so does Efrati. “The biology of aging can be taken back in time—and this is very exciting. It’s like the first time man landed on the Moon,” Efrati says. In addition to his work at the Sagol Center for Hyperbaric Medicine, Efrati is the Chair of the Medical Advisory Board at Aviv, a company which owns hyperbaric clinics in Israel, Dubai, and The Villages, a retirement community in Florida. These clinics offer treatments for anti-aging and dementia. Efrati is also a shareholder at Aviv, which makes it hard to keep his research independent and raises red flags for some experts. “I suspect that the big ticket item for them is anti-aging and prevention of dementia,” says Michael Bennett, an anaesthesiologist at Prince of Wales Clinical School in Sydney, Australia, who conducts research on the evidence for hyperbaric medicine.

Other researchers outside Efrati’s team agree that the results of the research are promising, but they urge caution in interpreting it. “Let’s not jump in too early,” Robins says. For one, the research was done on a small number of participants, which can lead to skewed or misleading results. The size of the effect was sizable, but had a large margin of error. For example, the telomere length of B cells, a type of white blood cells, increased 29.39 percent—but that could be off plus or minus 23.39 percent. Finally, Valter Longo, a cell biologist at the University of Southern California, points out that cell death is sometimes a good thing—telomeres might tell cells to die before they become cancerous. In short, we don’t actually know that shorter telomeres are a root cause of aging or are just a process associated with it.

Much of the research on HBOT and the more obvious signs of aging (think: cognitive decline and achy joints) fails to use so-called double-blind studies, Bennett says, where neither the study’s participants nor the researchers knows which treatment they are giving and getting. Instead, the control group knows they’re not receiving the treatment. That’s a problem because with hyperbaric medicine, there’s a huge potential for a placebo effect, Bennett says. “You can imagine: You come into this special place every day for months. You have all these people looking out for you.” That psychological effect alone could account for improvements we see in many of these clinical trials, he says. However, it’s unlikely that the placebo effect would affect hard measurements, like telomere length, Bennett adds.

Currently, Efrati’s team is studying the effects of HBOT on cognitive decline, using a double-blinded randomized control trial—the gold standard of scientific evidence in medicine. That’s a good start, Robins says. But we still need to see other researchers producing the same results before making claims that HBOT reverses or slows the aging process, he added.

There’s another major problem with the emergence of hyperbaric health spas and at-home chambers: The treatment they perform isn’t the HBOT that’s proven to be effective for wound healing and decompression sickness. HBOT typically involves a hard-shelled chamber, pure oxygen, and between 1.5 and three times the air-pressure of our atmosphere. Most hyperbaric spas have what amounts to a bag which they pressurize very slightly—1.2 or 1.3 times the air-pressure of our atmosphere, says Lindell Weaver, an undersea and hyperbaric medicine specialist at Intermountain Healthcare in Salt Lake City, Utah. You’d get a similar change in pressure traveling from high-altitude Salt Lake City to San Francisco, he added.

“I’m not saying it doesn’t work,” Weaver says about this low-pressure hyperbaric therapy, “but if it works, where’s the scientific evidence? Where are the clinical trials showing efficacy? They don’t exist.”

And HBOT isn’t without its risks. When performed at an accredited facility for indicated conditions, HBOT is safe. But it’s not something to mess around with. Administered at the wrong pressures, the therapy can cause seizures, hearing loss, and vision problems. Not to mention pressurized oxygen is a huge fire hazard. In 2009, a woman and her grandson were killed when a hyperbaric chamber at a Florida clinic burst into flame.

And because of the hype around HBOT as an anti-aging treatment, people are building DIY chambers or purchasing their own. One of Huang’s colleagues recently called him up regarding a man who tried to build an at-home hyperbaric chamber. “It exploded and he had to be evacuated with a collapsed lung,” Huang says. Another patient gave himself the bends by dialing up the pressure in his chamber to a dangerous degree.

HBOT is a medical treatment and absolutely dangerous to perform in a spa setting or at home, Efrati says. Other experts go further. They say it’s too early to market it for anti-aging, even in medical facilities. “While I applaud the research and am encouraged that we are seeing these things, I think the work still needs to be done to show that HBOT actually does what they [Efrati’s team] are purporting to do,” Huang says. As for research on aging at the cellular level, we also need to better understand what the mechanisms of aging are before drawing conclusions from telomeres alone, Longo adds.

That’s how evidence-based medicine works. You perform the study. Then you do it again. And again. “It’s exciting. It’s promising,” Robins says of HBOT as an anti-aging treatment. “But we don’t know it works—yet. So we have to be careful.”