A rare type of star probably forms when two stars spiral around each other and smash together. 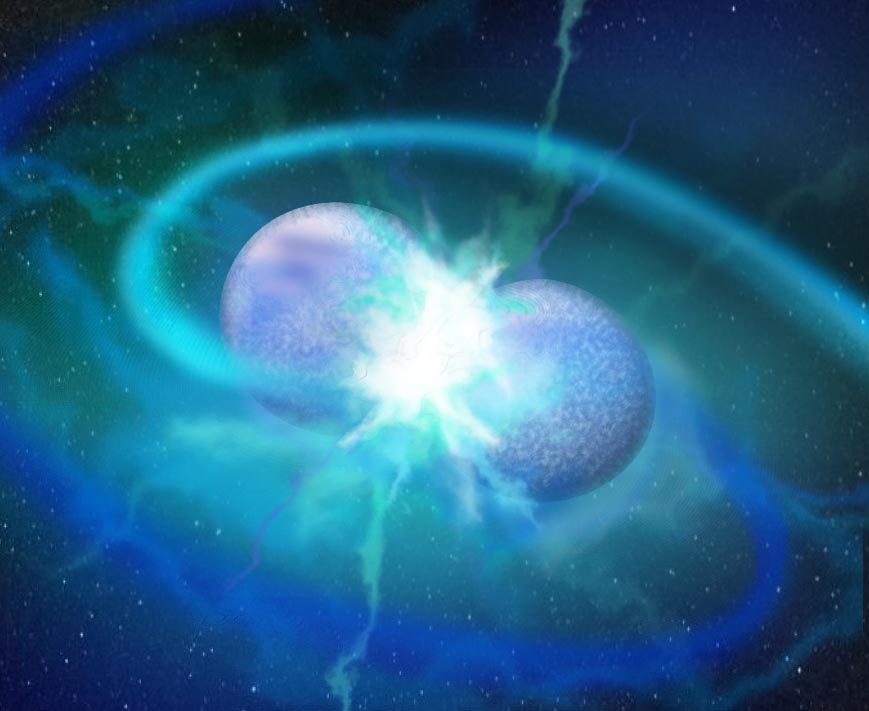 White dwarf stars can collide to create a new type of strange, “upside-down” star, according to two new studies published this week.

A team of astronomers identified two small, bright stars called hot subdwarfs that had an as-of-yet unseen makeup. Another research group found a mechanism to explain how these kinds of stars could have formed.

The two strange stars were “the first of their kind” to be identified and must be extremely rare, says Marcelo Miller Bertolami, an astrophysicist at the Institute of Astrophysics in La Plata, Argentina, who led the theoretical study on how such stars might form, published in the Monthly Notices of the Royal Astronomy Society.

White dwarfs are the slowly-cooling cores of dead stars. Hot subdwarfs are fairly uncommon, old stars that burn four times hotter than the surface of the sun and, unlike our sun, fuse helium in their cores instead of hydrogen, Miller Bertolami says.

Most stars are about three-quarters hydrogen, one-quarter helium, and a smattering of other elements, Miller Bertolami says. A star fuses its lightest elements first, so it will only fuse helium if it’s already burned up its hydrogen, or if another object’s gravity pulled the hydrogen away from the star.

But the two newfound stars didn’t resemble other helium-burning subdwarfs, as a team of astronomers noticed, according to a report published in the same journal this week. The team, led by Klaus Werner, an astronomer at the Center for Astro and Particle Physics in Germany, realized they saw not only a star with a helium-rich surface, but one rich in carbon and oxygen as well.

“This is extremely, extremely uncommon,” Miller Bertolami says. Typically, a star creates carbon and oxygen by burning helium in its core, and those elements wouldn’t be visible on the surface. But the team found that about 40 percent of the star’s surface was made of carbon and oxygen.

“You need to find a way to carry all that carbon and oxygen to the surface and this is not easy,” Miller Bertolami says.

Werner’s team, who already knew Miller Bertolami, reached out to him to try to figure out how these bizarre objects could have formed. Miller Bertolami’s team was already working on a similar project and were able to show how such a strange star could form.

Miller Bertolami and his colleagues found that a heavier helium-rich white dwarf, under the right conditions, could interact with a lighter carbon- and oxygen-rich white dwarf. Together, that pair could create a hot subdwarf that combines the materials of both.

These two stars would have existed in a binary—meaning they orbited around each other. Over time, they would emit gravitational waves and spiral toward each other until they met, Miller Bertolami says. In this process, they would get close enough that tidal forces would rip apart one or both of them.

Typically, the more massive star will destroy the less massive one and cannibalize the lighter star’s material. In Miller Bertolami’s model, the helium white dwarf destroyed a lighter carbon-oxygen one, which is how the surviving star ended up with carbon and oxygen star guts splattered all over its surface.

The white dwarfs were previously dead, in that they no longer fused atoms into heavier elements to produce energy. But the merger between them reignited fusion within a new, “reborn” star—the subdwarf, Miller Bertolami says.

The two studies form “a nice connection between the theory and the observations,” Warren Brown, an astrophysicist at the Center for Astrophysics | Harvard & Smithsonian who wasn’t involved with either study. “The measurements are fairly straightforward,” he says, and the theoretical explanation seems like “a great solution” to an observational puzzle.

What’s surprising is that these stars are “kind of upside down,” Brown says. The heavy elements that scientists would expect to be created in their cores—carbon and oxygen—appear on the surface, while the cores are full of light helium.

“It’s physically possible, so it must happen,” Brown says. The question is how often? Once astronomers get a larger sample, hundreds, or at least tens of stars, they can begin to figure out how prevalent these kinds of stars are in the galaxy.

Although this observation is unprecedented, astronomers may soon have new tools to spot similar stellar events. The Laser Interferometer Space Antenna (LISA) and other next-generation gravitational wave detectors will be able to pick up tens of thousands of stellar binaries in our galaxy, Brown says. Mergers of white dwarfs like these will emit gravitational waves and offer another lens through which to study them.