A massive, murky void in space has surprisingly few galaxies

It's a dark period in the Universe's early days. 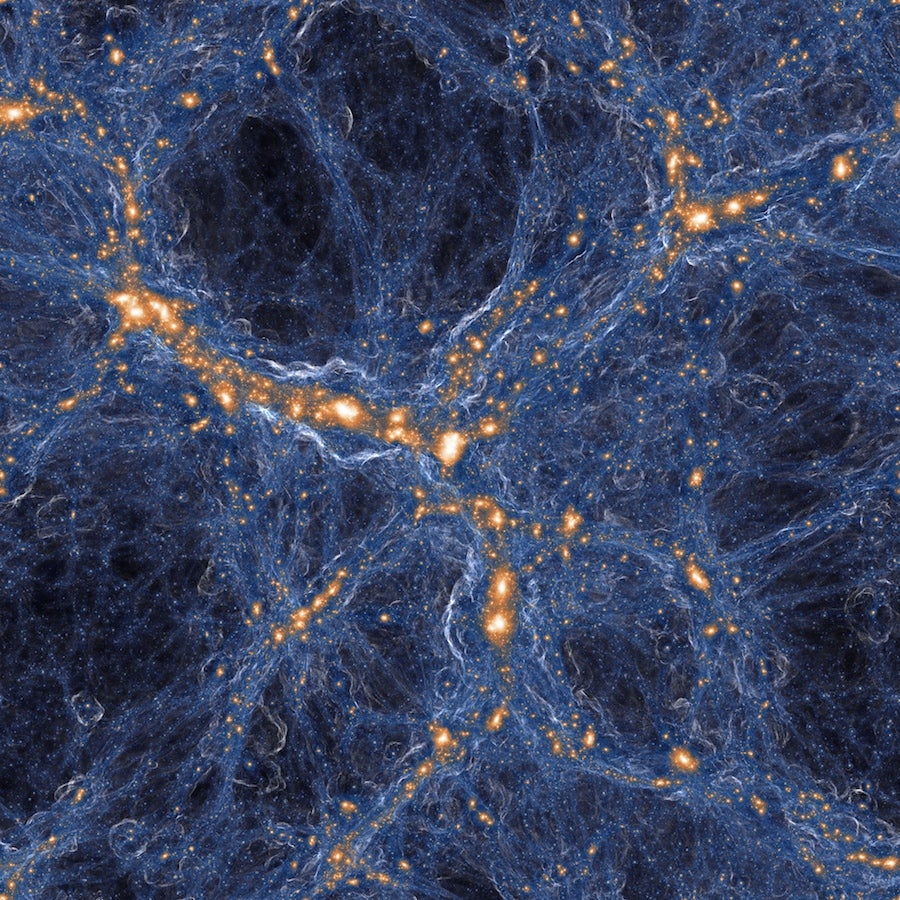 Breathe in. Breathe out. It’s all going to be OK. There are about 25 septillion molecules of air in the cubic meter (one meter = three feet) around your face, plenty to fill your lungs and keep your body functioning. Isn’t that great? If you were out in the space in between galaxies right now, you’d be in a far worse predicament. Out there, there’s only about one atom of gas for every five cubic meters of space.

But space is also unfathomably large, so even that infinitesimally small amounts of gas can be detected by astronomers as they peer back into the depths of our galaxy. That’s because as light from stars and galaxies passes through the gas, certain wavelengths of light can get absorbed by even sparse material, a signal that astronomers here on Earth can detect.

At the moment, this intergalactic gas is spread out pretty evenly through our 13.7 billion-year-old universe. Light passing through tends to be blocked and emitted in very predictable, uniform ways. But that wasn’t always the case. Back when the universe was still young—a mere one billion years old—this gas was more opaque than it is today, and its opacity varied over different regions of space, instead of being evenly distributed. Knowing more about that variation can give researchers a better idea as to what was happening in the early universe. So astronomers peered into the void.

“In a sense, this is the most unusual place in the universe that we’ve ever seen,” says George Becker, an astronomer at UC Riverside and lead author of a paper in The Astrophysical Journal that found that a murky void in space 500 million light years across had fewer galaxies than would be expected under certain theoretical scenarios.

Using a high-powered telescope on Mauna Kea in Hawaii, that could look observe a large segment of the sky, Becker and colleagues searched the region for young galaxies. Typically, an area that was this dark and opaque would be (relatively) full of gas and galaxies. But the galaxies weren’t there. And while the gas was slightly thicker back then, (60 atoms per cubic meter) it’s not because the gas was obscuring the astronomer’s view. While the gas that Becker and his team look at is opaque to specific wavelengths of ultraviolet light, other wavelengths, like visible starlight are able to get through.

If there were a bunch of galaxies chilling in the giant void that Becker had already identified, he would have seen them.

But they weren’t. Instead, there were a few galaxies, but not enough to account for the high opacity. Becker thinks this is because this area might have been going through a particularly fascinating period in the Universe’s history. After the Big Bang exploded and sent hot material streaming outwards, everything cooled off, including hydrogen, one of the brand-new elements. This hydrogen gas stayed neutral and uncharged until galaxies started to form, at which point some of the hydrogen started getting all charged up again, becoming “reionized” as light from the forming galaxies interacted with the gas. While ionized hydrogen is mostly transparent, neutral hydrogen tends to be more opaque to some ultraviolet wavelengths.

One explanation for why this void is so opaque is that it still may be in a transition between the early darker ages of the universe and reionization.

“Figuring out reionization is important in terms of understanding large-scale structure and the distribution of galaxies today, where they came from, and what kind of galaxies formed first,” Ferah Munshi, an astronomer at the University of Oklahoma who was not involved in the study, says.

Munshi says she finds the new study particularly intriguing because it essentially carries out a test that theoretical astrophysicists have been thinking about (and publishing papers on) for a while.

Munshi and other theoretical astrophysicists are contemplating how this new information might one day be incorporated into their simulations. Meanwhile, Becker hopes that he and his colleagues will be making additional observations of other parts of the sky in the coming months.