When you go out in the sun, melanin in your skin gets right to work. 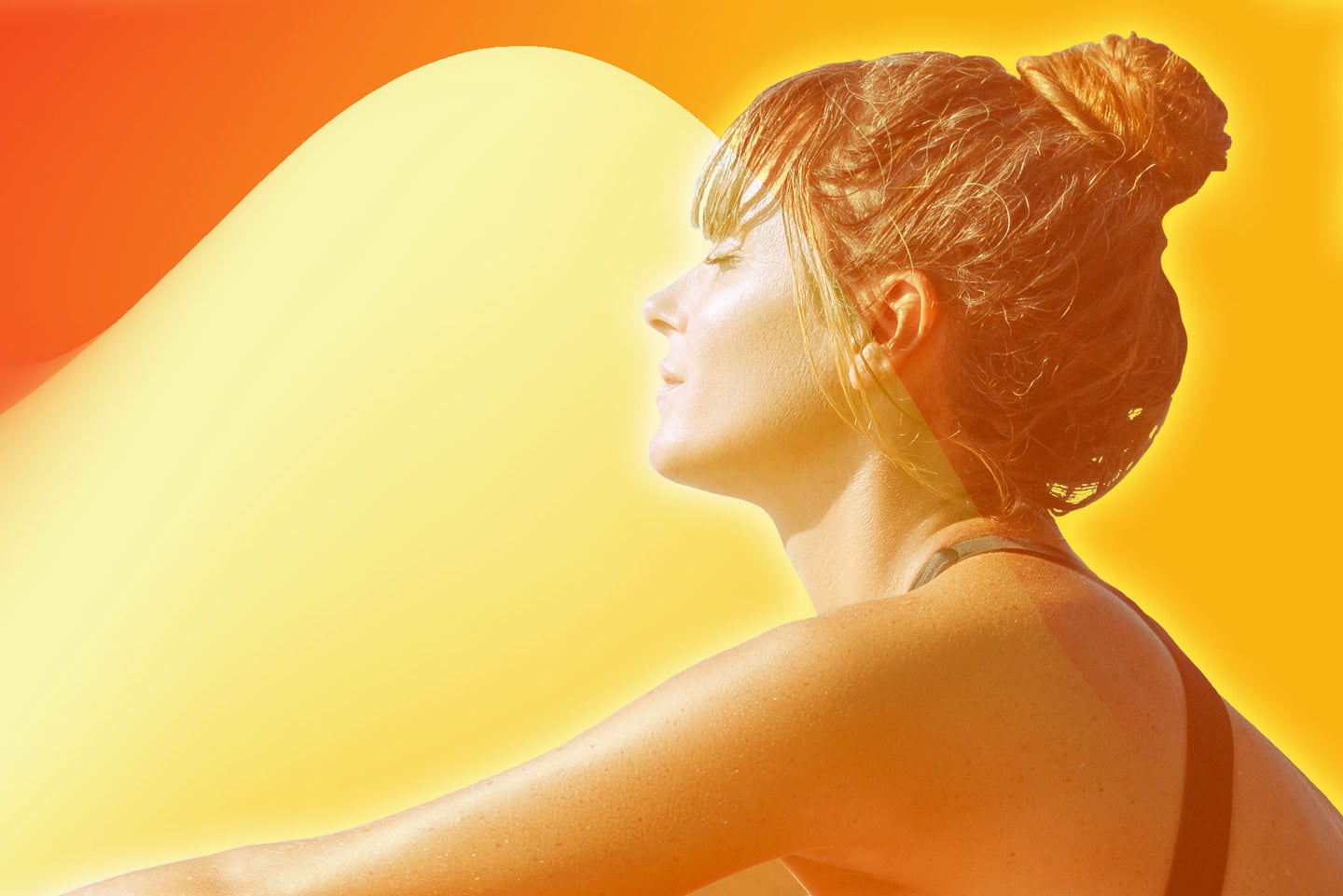 The way the sun impacts melanin can go in two directions—depending on if it's in your hair or skin. OlgaSinenkoBO via Deposit Photos
SHARE

Warm weather is approaching, which means more days spent under the sun, splashing around at the beach, adventuring in nature, and generally passing any extra minutes outside. And when you step out for that first beach day of the season, your hair and skin are inundated with something they haven’t felt in a while—a flood of ultraviolet radiation (UVR), which are waves of energy emitted by the sun that can cause visible color changes to your body. But as you bask in those rays, what exactly makes your skin tan while your hair lightens?

The key to both tanning and hair photobleaching processes is the way UVR affects a very special pigment in both the hair and skin—melanin. Hair cells are dead, made only of of lipids, water, pigments, and structural proteins. So when the sun waves hit these lifeless cells, it breaks down the color-forming melanin there, causing bleaching until new hair can replace the color.

Skin, on the other hand, is alive, and has a major defense mechanism.

“Melanin [in the skin] acts a lot like a natural sunscreen,” says Helen Norton, an assistant professor of anthropology at the University of Cincinnati who studies the genetics of skin pigmentation. “One thing it is able to do is absorb UVR when it hits the skin, and that prevents it from penetrating deep into our epidermis and dermis, which can prevent some of the damage that UV could do.”

This response called facultative melanogenesis in three stages. First, there’s immediate pigment darkening when you walk out into the sun, and your surprised body registers a change in your UV radiation input. Within minutes of basking in the sunlight, a messenger within your cells gets stimulated and tells your genes to make more protein, resulting in quick melanin production.

Next, there’s a persistent darkening response that takes a few hours to kick in, characterized by increased pigment production. And finally, there’s a delayed response that can take over a day to appear and can last for quite some time, preparing the body for future exposure. These all work together to give you your photoprotective summer tan, but when these responses can’t work quickly enough, you might get a sunburn.

[Related: Your summer guide to sunscreen, from SPF to not-so-magic pills.]

All humans, no matter how pale, have melanin in their skin. In fact, everyone has the same amount of melanocytes, the cells in the skin that produce melanin—about 1200 melanocytes exist per square millimeter of skin. Melanin comes in two main varieties: pheomelanin, a red/yellow color, and eumelanin, which is more brown/black in color and produces more melanin overall. Your skin color is a ratio of how much of each type of melanocyte a person has and how much melanin those cells end up producing.

Having more melanin can also provide protection against the biggest extrinsic form of aging—sun damage. A deep skin tone acts as a super shield against damage like sunspots, wrinkling, and pigmentation.

Without these natural protections, the skin would be left even more exposed to the dangerous effects of the sun— like uncomfortable sunburns and early aging. Especially for people with lighter skin tones, more sinister outcomes like UV- related melanomas, called cutaneous melanoma, are another worry. They are the third most commonly diagnosed cancer in the US, with 192,000 new cases estimated for 2019 and an incidence six times higher than 40 years ago.

“Melanin is also something that protects folks of color from getting skin cancers related to the sun—it’s fact,” says Adewole Adamson, a board-certified dermatologist and assistant professor at the University of Texas at Austin. “When was the last time we heard of a skin cancer epidemic in Africa, or Asia for that matter? We don’t.”

[Related: A guide to sun protection for people with darker skin.]

The ability to tan may have developed as an evolutionary adaptation to different climate zones and seasonal changes in sunlight, according to Norton. Having lighter skin in the winter could be advantageous because it allows what little UV there is to penetrate the skin and kickstart the processes in the body that produce Vitamin D, a steroid hormone that we need for immune responses and the absorption of calcium from the gut to the skeleton and teeth.

Norton also says melanin may have also developed to provide a barrier against another more obscure side effect of sun exposure that can take a toll on reproductive fitness—the breakdown of folic acid in the body. By blocking any UV rays from entering into the body, melanin provides important protection for people of reproductive age, as a lack of folic acid can lead to neural tube birth defects and mistakes in spermatogenesis, the production of sperm.

Nowadays, with all of our modern sunscreens and Vitamin D supplements, skin tone doesn’t matter as much when it comes to surviving a dark winter or a blistering summer as it did to our ancient ancestors.

“[People] forget the fact that, as humans, we have developed all these cultural and technological adaptations that allow us to survive and thrive even in places where our genes, or the proteins they produce, do not seem like they’re the best match for the environmental pressures,” Norton says. “We wear clothes, we invented sunscreen. The cool thing about humans is that we develop all these different ways to survive in different places.”