The test is based on the spike in radioactive carbon in the Earth's atmosphere during the Cold War. 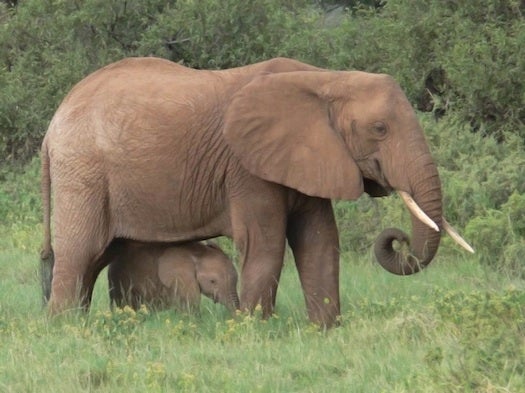 One way poachers get the big elephants they want is by shooting a baby elephant, first. The young animal won’t have a lot of ivory on it, but the kill draws in the mother, whom the poachers then shoot, too, as Scientific American reported in 2009.

That Scientific American article described a DNA tool for tracing the country of origin of ivory. Now, another group is reporting they’ve developed another tool, which is able to distinguish between legal and illegal sold ivory.

The technique looks at the radioactive carbon in the ivory, which elephants—and every other living creature on earth—incorporated into their bodies in unusually high levels during the Cold War era. The carbon tells scientists whether a piece of ivory comes from an elephant that died before or after the United Nations banned products made from elephant parts in 1989.

The tool’s creators hope it will help officials prosecute those who harvest and sell ivory illegally. “Our dating method is affordable for government and law enforcement agencies and can help tackle the poaching and illegal trade crises,” geologist Kevin Uno told Columbia University. Uno worked on the tool as a graduate student at the University of Utah and is now a researcher at Columbia.

The tool also works for determining the age—and thus the legal status—of rhinoceros horns, which are poached because some Asian customers believe they cure a variety of ailments. The belief comes from traditional Chinese medicine, NPR reports, although China removed references to rhino horns from traditional medical books after banning the trade in 1993.

Plants incorporate carbon into their roots, stems and leaves as they grow. Animals then get that carbon from eating plants or eating animals that eat plants. Other research groups have used the Cold War spike in carbon-14 to figure out the birthdates of human brain cells, fat cells and teeth.

The ivory group tested many animal tissues this way, including hippopotamus teeth, elephant tail hairs and blue monkey hairs, in addition to elephant tusks and rhino horns. For tissues formed after 1955, the scientists are able to pin down a death date that’s within 0.3 to 1.3 years of the animal’s actual death. For tissues formed before 1955, the technique is much more uncertain, perhaps getting a death date wrong by more than 17 years.

The researchers published a report about their findings today in the Proceedings of the National Academy of Sciences.