The Energy Fix: How Waste Could Power The U.S. For Decades

The world throws away enormous amounts of energy each day. In the U.S. alone, waste streams could account for 100,000... 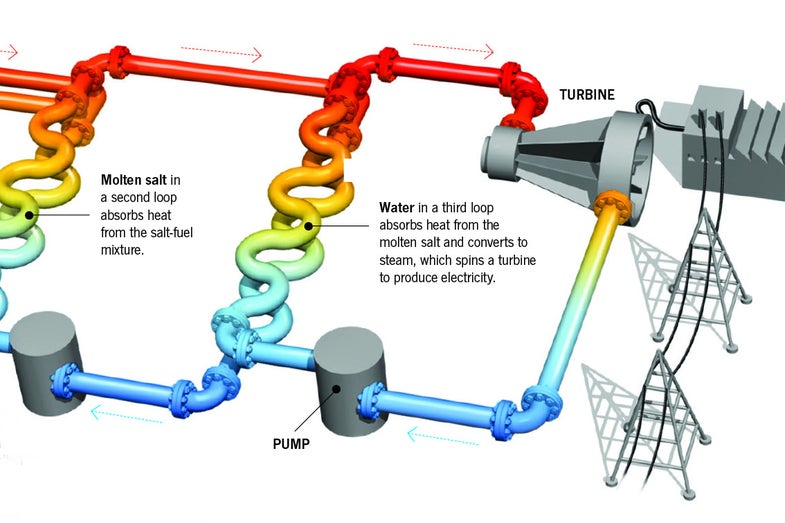 The world throws away enormous amounts of energy each day. In the U.S. alone, waste streams could account for 100,000 megawatts of untapped electrical capacity. New technology could convert those overlooked sources into usable power.

U.S. nuclear reactors store nearly 70,000 metric tons of commercial spent fuel, which remains dangerously radioactive for tens of thousands of years. Engineers at a start-up called Transatomic Power say a reactor they designed could use this stockpile to meet the nation’s energy needs for 70 years. Their 500-megawatt Waste-Annihilating Molten Salt Reactor (WAMSR) is based on a fluoride molten salt reactor developed at Oak Ridge National Laboratory in the 1960s. But two Transatomic cofounders, PhD candidates at MIT, made crucial modifications: They shrunk the reactor by a factor of 20 and engineered it to capture 98 percent of the energy in spent fuel pellets. Half of WAMSR’s own waste product, which totals only four kilograms, becomes inert within a couple of hundred years.

Producing biofuel typically requires growing a feedstock, such as switchgrass, that consumes valuable land and water. But any carbon source could provide that biomass, including garbage. Fulcrum BioEnergy says the plant it plans to build near Reno, Nevada, in 2015 could convert 160,000 tons of municipal trash into 10 million gallons of transportation fuel per year­—and for less than 70 cents a gallon. Machines would shred wood, fabric, and non­recyclable paper and plastic into two-inch bits and feed them to a gasifier. A chemical reaction would then convert the gases into ethanol, jet fuel, or diesel.

U.S. factories blow off as much as 13 quadrillion BTUs of waste heat each year. Alphabet Energy believes it can convert some of that heat back into electricity, improving the efficiency of plants by several percent. The company’s system sandwiches a thermoelectric material between two heat exchangers, one containing exhaust gas and the other a coolant. The material generates electricity from that temperature gradient. And because it’s made of silicon, it can be produced with standard semiconductor equipment.