FYI: How Long Would It Take Piranhas To Eat A Person?

Is the fish's deadly rep justified? 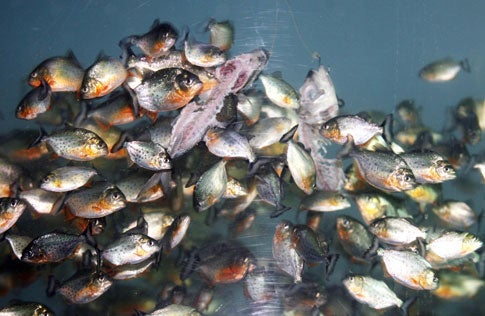 After a trip to the Amazon jungle, President Teddy Roosevelt famously reported seeing a pack of piranhas devour a cow in a few minutes. It must have been a very large school of fish—or a very small cow. According to Ray Owczarzak, assistant curator of fishes at the National Aquarium in Baltimore, it would probably take 300 to 500 piranhas five minutes to strip the flesh off a 180-pound human. But would this attack even happen?

Piranhas get a bad rap. Yes, they are carnivorous critters with sharp teeth. “It’s like they have a mouthful of scalpels,” says Erica Clayton, Amazon collection manager at the Shedd Aquarium in Chicago. Even so, instances of piranhas biting humans are extremely rare. Most are happy snacking on other fish and plants.

In general, if you leave them alone, they’ll do the same for you. Still, if you decide you must take a dip in the Amazon, make sure you don’t have any open wounds—the smell of blood attracts piranhas.

This article originally appeared in the April 2009 issue of Popular Science_ magazine._