And what is the fish thinking about? Spoiler: food. 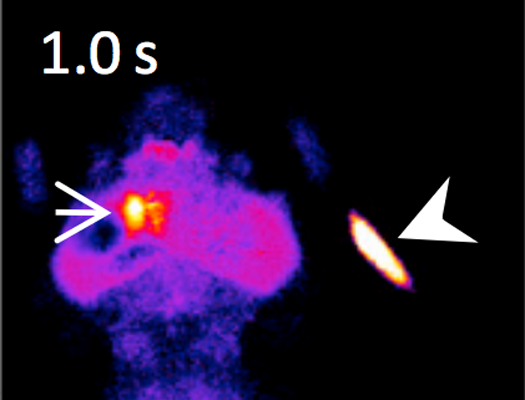 What’s in a thought? When it comes to the zebrafish, now you can see for yourself. For the first time, Japanese researchers have captured video of thoughts moving through a zebrafish’s brain.

By genetically modifying a transparent zebrafish larvae to create a glow in reaction to calcium ions–which skyrocket during neuron activity–scientists could track the regions in the fish’s brain activated by the thought process.

Researchers released a paramecium, a single-celled zebrafish food source shaped like a grain of rice, and watched the glowing neurological response from the fish. As the paramecium moves from right to left, the zebrafish’s thoughts bounce from left to right.

This research could lead to better psychiatric medications, according to Koichi Kawakami, one of the co-authors of the paper in Current Biology. Plus, there’s always the possibility of thought detection: “In the future, we can interpret an animal’s behavior, including learning and memory, fear, joy, or anger, based on the activity of particular combinations of neurons,” he said.

How about we just keep watching the glowing fish?