Related: Do they change the surrounding temperature? 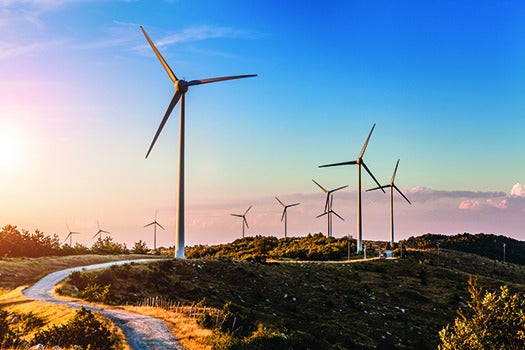 Wind turbines extract kinetic energy from the air around them, and since less energy makes for weaker winds, turbines do indeed make it less windy. Technically speaking, the climate zone right behind a turbine (or behind all the turbines on a wind farm) experiences what’s called a “wind speed vacuum,” or a “momentum deficit.” In other words, the air slows down.

The effect has implications for wind-farm efficiency. Upwind turbines in a densely packed farm may weaken the breeze before it reaches the downwind ones. It could even have a more general impact. If wind farms were constructed on a truly massive scale, their cumulative momentum deficit could conceivably alter wind speeds on a global scale (though how winds would change is complex—they’d likely slow in places and speed up in others).

Wind farms can also affect the local temperature. According to Somnath Baidya Roy, an atmospheric scientist at the University of Illinois, as a breeze passes over a wind farm, the turbines create an atmospheric wake where wind speeds drop and turbulence increases. The rotors spawn a set of eddies that mix air from above with air from below. The eddies can lift cool air and sink warm air or vice-versa. That turbulence could raise or lower local temperatures. In a paper published in 2012, one group of researchers studied areas over several wind farms in Texas and found that local surface temperatures had risen by a small but significant amount.