It's only the third cold seep discovered off the U.S. Atlantic Coast, and it could help researchers understand how life exists in harsh environments, including potentially on other planets. 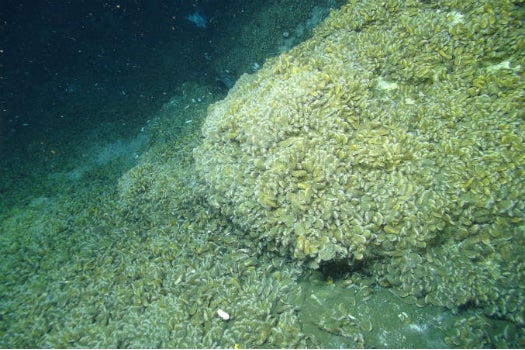 Scientists on a research mission sponsored by the U.S. Bureau of Ocean Energy Management and the National Oceanic and Atmospheric Administration have found what could be the U.S. Atlantic Coast’s largest methane cold seep near Virginia.

Cold seeps are regions in the sea floor where fluid rich in compounds like methane flows out at the same temperature as the surrounding ocean water (in contrast to the hot water that seeps from hydrothermal vents).

Methane seeps allow life to flourish in otherwise fairly barren deep sea environments. This is the third seep documented on the Atlantic Coast, and is much bigger than previously discovered sites, with areas up to a kilometer long and hundreds of meters wide. Mussels can survive in seeps through chemosynthesis, a process that utilizes bacteria in their gills to turn methane into energy. The seep’s surrounding ecosystem also contained sea cucumbers, shrimp and fish, some of which exhibited what the researchers call “unusual behaviors,” though they did not elaborate.

Studying these undersea ecosystems can help us understand how life exists in harsh environments, including potentially other planets, researcher Steve Ross explained in a press statement. It could also enhance our understanding of gas hydrates, a potentially huge alternative energy source.