FYI: Why Are There No Native Monkeys In North America? 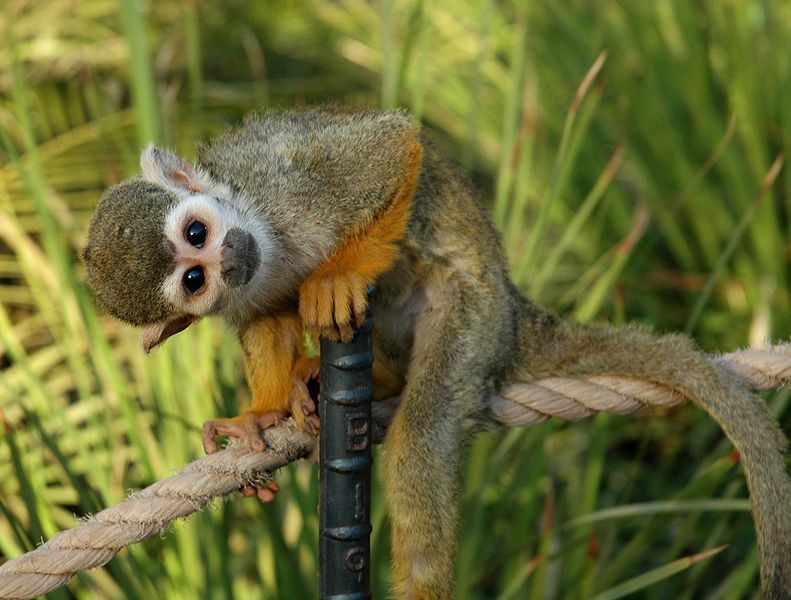 The infamous “Mystery Monkey of Tampa,” an escaped rhesus macaque, was captured back in October. The rhesus macaque is not a rare monkey; it’s adapted to human society better than most, can survive on all kinds of foods, and can live in most any kind of hot-weather environment.

And yet the Mystery Monkey captured the nation’s attention. A monkey! On the loose! In Florida! So cool! And it got us wondering: why aren’t there monkeys all over the United States? We’ve got tropical zones in the Florida Keys and the Caribbean, hot grasslands in the deep south, humid swamps in Louisiana and South Florida. And there are cold-weather monkeys too, for instance in northern Japan and the Himalayas. What’s the deal? Why don’t we have any wild monkeys here?

I spoke to Dr. John Flynn, a paleontologist and expert on mammalian evolution at the American Museum of Natural History, to find out why the US is stuck with lame squirrels and pigeons and stuff rather than cool monkeys. “In terms of modern primates, that’s a true observation,” he said. “But 50 million years ago, there were primates here.” It turns out there are lots of reasons why the ancient primates that inhabited what is now the United States–and even Canada!–no longer call those areas home.

Primates came to the New World (meaning North and South America) from, we think, Africa. As improbable as it sounds, scientists think early primates crossed the Atlantic Ocean and landed on the shores of both continents tens of millions of years ago, probably on some kind of vegetation raft. That’s how most plants and animals get to isolated islands–which the Americas were, at the time. Fossils have been recovered of early primates in Texas a whopping 43 million years ago, the oldest primate fossil ever found in North America. But the continents looked very different then, compared to now; most importantly, North and South America were completely different islands. The Isthmus of Panama, which we now refer to as Central America, didn’t appear until much later, by which time the climate on both Americas was very different from when the primates first landed there.

When they did first land here, the climate was much warmer than it is now, and the primates evolved and diversified to take advantage of that. 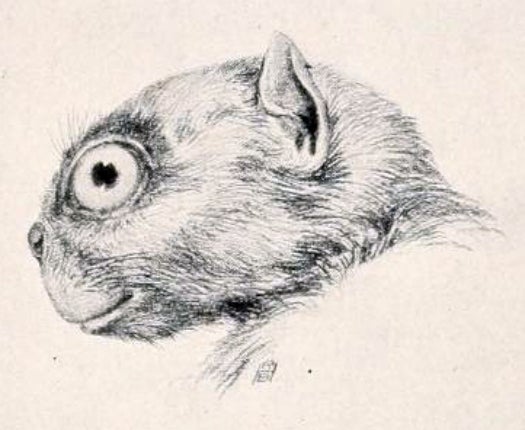 An artist’s rendering of Anaptomorphus homunculus, an early primate.

During the Eocene, lasting from 56 to 33.9 million years ago, the planet warmed to an incredible degree. We’ve found evidence of palm trees in Alaska from that era. The entire planet, besides the very tips of the Arctic and Antarctic, was probably covered in rainforests, much of it tropical. For a monkey coming over from Africa, North America would have looked just great. Early primates thrived on both continents, with no contact between them. In North America, there were two main families of these primates: the omomyids and the adapids. There’s some variation in size, behavior and diet, but in general, these were small, tarsier-like creatures with grasping hands and claws, large eyes, and bodies adapted to eat fruits, leaves, and insects. There’s a lot of debate about the modern-day relatives to these primates; some think they’re strepsirrhines, the family including lemurs, lorises, and bushbabies, but others think they’re basal relatives of the tarsiers (which are primates, but not closely related to other monkeys).

Then the planet began to cool, and cool quickly. Forests died out. The poles covered with ice. Many of the flora and fauna that had populated the planet during the Eocene just couldn’t survive in the new, colder world. This event is called the Grande Coupure–occurring about 33.9 million years ago, it was a mass extinction of animals, in which most of the world’s creatures (aside from a precious few, like the Virginia opossum and the dormouse) were unable to adapt to the new climate and perished. It hit the primate family especially hard. In the New World, the primate population shrunk significantly. Any primate living in, say, the Great Lakes region simply went extinct, unable to cope with the new Wisconsin winters.

In South America, the primates contracted to the region around the equator. But even the hottest, southernmost parts of North America–then still detached from South America–were too chilly or otherwise inhospitable for the North American Primates. The few places where they maybe could have survived, like the Florida Keys and the islands of the Caribbean, were inaccessible. Sure, monkeys could have survived in Aruba, if they had arrived at just the right time. But the chances of getting there on some kind of float, the way primates had come over from Africa so many millions of years before, were slim, and the Earth was cooling rapidly. There are some primate fossils from the Caribbean; “Some monkeys have gotten to some of the Caribbean islands and gone extinct,” says Dr. Flynn. Another collection of random events and they might have survived, but not this time. 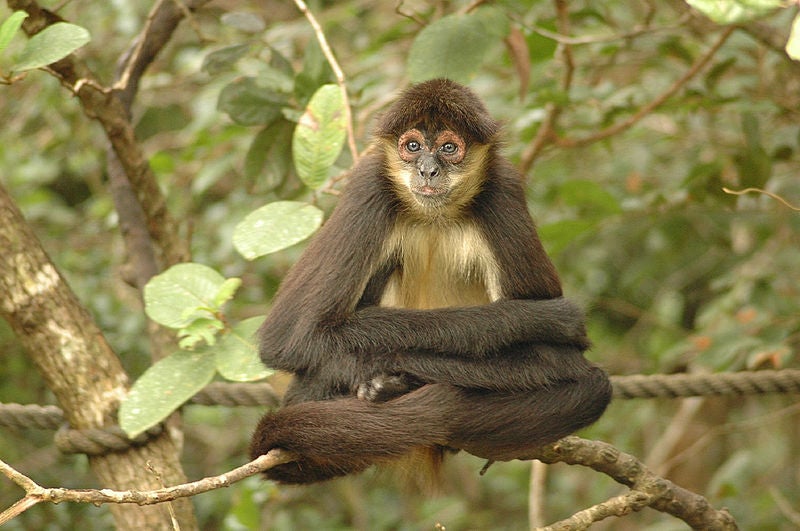 The specific type of primate that survived is called the Platyrrhines. “The Platyrrhines, or New World monkeys,” says Dr. Flynn, “are all arboreal. They live in tropical forests; they’re specialized for that kind of habitat.” So the monkeys we now know, which live in the warmer and more forested parts of South and Central America, are all the survivors of the cooling planet. They lucked out and ended up in the one section of the New World that could suit them. And there they stayed, adapting and evolving. Then, 3 million years ago, the Isthmus of Panama formed, connecting North and South America and separating the Atlantic from the Pacific Oceans. That’s not that long ago, in geographic terms. A few species–Dr. Flynn specifically named the various species of spider monkey–were hardy enough to move north along the isthmus and survive as far north as southern Mexico. North of that was desert. Too dry and too sparsely forested for a New World monkey to traverse.

Why haven’t they moved further north? Well, the Platyrrhines are not especially adaptable animals. Unlike the macaque and other Old World monkeys–or even non-primates, like the raccoon or fox–they need trees, they need heat, and they need moisture. Push them too far north and they simply won’t survive. There’s a distinct climate zone division in southern Mexico–no Mexican monkey can make it on the northern side. 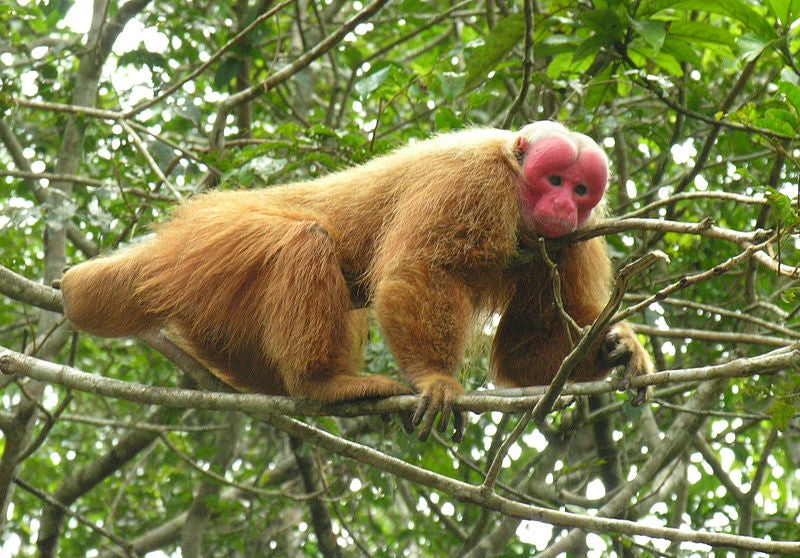 Primates are often intelligent, but that doesn’t translate into adaptability. Think of the mountain gorilla, restricted to a few populations in forested central Africa, unable to live anywhere else. Adaptability is often a sign of intelligence, but intelligence in a species is no guarantee of adaptability.

The recurring answer to the question of why there are no monkeys in the US is “how would they get here?” Other animals, and probably humans, passed over the Bering Land Bridge from Russian into Alaska, but the Bering Land Bridge appeared only 20,000 years ago–long after the planet had cooled to when that latitude would be deathly cold for a monkey. “The only way you could get to North America would be polar routes or through water,” says Dr. Flynn. “Even the most extreme monkeys don’t get to the super high latitudes, so the continent was effectively sealed off.”

Monkeys can certainly survive in North America. The Mystery Monkey of Tampa is proof enough of that. But for them to survive here, they have to get here–the monkeys that were here, the Platyrrhines, aren’t the ones to survive in a place like Tampa. It’s actually possible that a Platyrrhine could maybe give it a go in the Caribbean or the Florida Keys, the most tropical environments north of Mexico, but: how would they get there (since those are all islands) and would they be able to survive with as much human settlement as those places have? 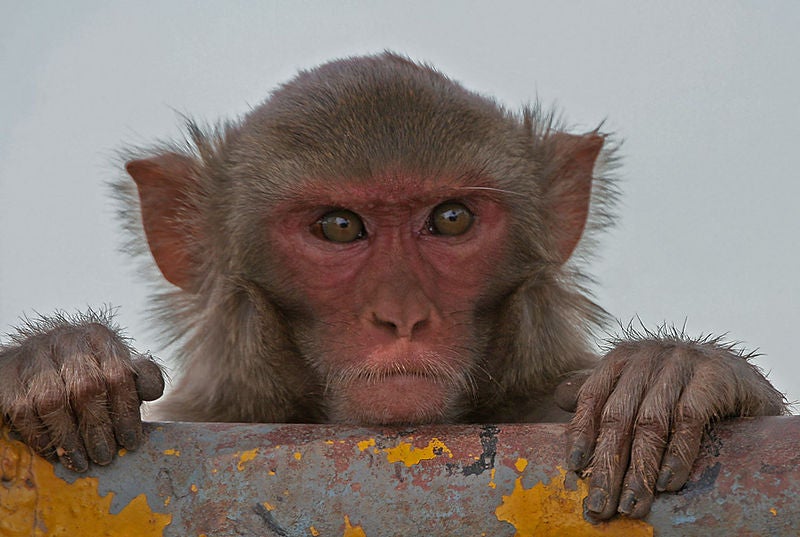 Macaques could make it, but it would take someone bringing them here–and that’s exactly what happened in the case of the Mystery Monkey, which was part of a troupe of macaques released by some lunatic tour boat operator known as “Colonel Tooey” who thought the macaques would make for a better “Jungle Cruise.” (This is a true story. Florida is weird.) Short of a whole bunch of determined crazies, monkeys that would survive in North America don’t have the means to get here.

But! What about global warming? Could the scourge of climate change lead to a friendly neighborhood monkey in Brooklyn? “Anything is possible in evolution,” says Dr. Flynn. “If climate change continues and it gets warmer globally, they could continue further north.” But we’d need continuous forests from southern Mexico on northwards, and “dryness is an issue, though in the future they might get increased rainfall.” So, no monkeys in the near future. But if the temperature keeps rising, I’ll keep an eye out my window just the same.