In a wide-ranging interview with PopularScience.com, Aldrin talks about a mission to Mars, 34 years of sobriety and the future of American leadership in space. 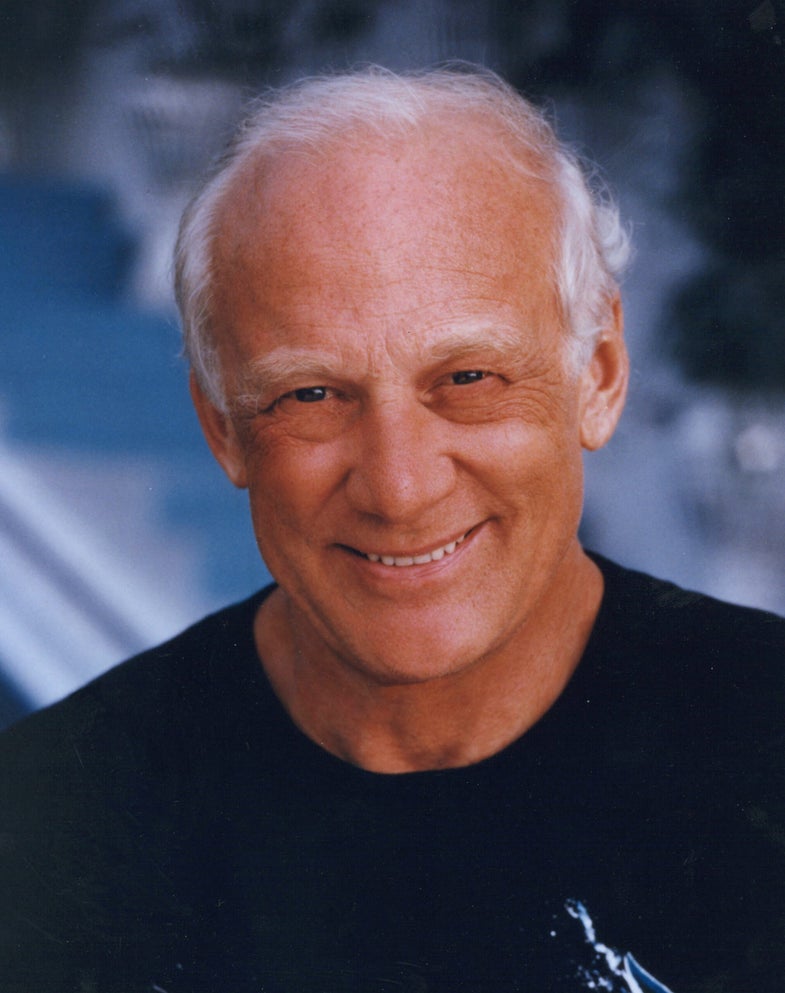 With enough money and enough might, humans could probably get to Mars in the next couple of decades. It’s a proposition made all the more relevant by the continuing findings of the rovers Opportunity and Curiosity. It would be a mammoth undertaking, but it’s possible, at least in concept. But should humans go, and should we stay? Will we? Buzz Aldrin thinks so.

Aldrin releases a new book today, “Mission to Mars,” in which he argues a future U.S. president should commit by 2019 to sending humans to Mars, and not returning them safely to Earth. It will take a brave leader to suggest something like this, but brave leaders have sparked space exploration before, he says.

His plan centers around something called a Mars Cycler, which Aldrin first conceived of nearly 30 years ago. It would create a “celestial triad of worlds,” hubs for the ebb and flow of passengers, cargo and commerce among Earth, the moon and Mars. The ships would be new designs–he says he’s “incensed” that most current space exploration prototypes look like Apollo–and he doesn’t want them to use solid rocket motors, a “technology that keeps popping up out of the casket.”

“Let’s take a page from commercial airliners and ratchet ourselves up from the disposable Dixie-cup model,” he writes.

The Cycler would need several steps to get off the ground. First, the project would include a practice run on the big island of Hawaii. A habitat module or some other system component would be remotely delivered by some robotic technology, probably controlled by a satellite or via radio link from Houston. Secondary components would have to be air-dropped together, with extreme precision. Then things get real. The first off-planet element would be a control center or habitation module, delivered to the L2 Earth-moon gravity-balancing point. That, in turn, would become a place from which controllers would manage the remote landing of the first moon habitat. Eventually, all this practice would lead to a remotely controlled delivery of the first stages of a Mars base. 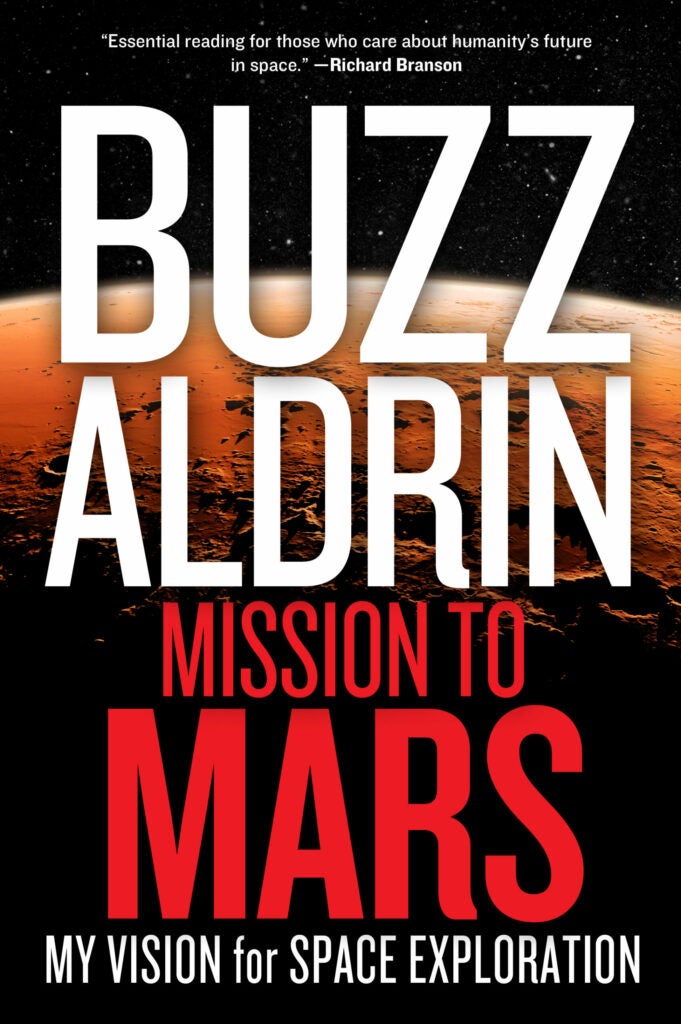 “If we persevere on this path, we can reach out some 200 million miles to Mars before 2035–66 years after Neil Armstrong and I flew the quarter-million miles through the blackness of space to touch down onto Tranquillity Base,” Aldrin writes. “There’s a historical milestone in the fact that our Apollo 11 landing on the moon took place a mere 66 years after the Wright Brothers’ first flight.”

I was intrigued, so I decided to ask to him about this. It turned out Buzz was eager to talk. As I quickly realized, conversations with Buzz are not necessarily back-and-forth. When he’s excited about something, he’s going to tell you about it, tangents and all. I wanted to ask if I could yell at the moon with him, but we didn’t get that far before his people pulled him offline for another interview.

PopularScience.com: Why would you want humans to stay on Mars permanently?

Buzz Aldrin: The uniqueness of that has yet to be fully reached. We bring people back. But the purpose of going to Mars is for humans to first begin to occupy, permanently, another planet in the solar system. The astronauts or pilgrims, whatever you might call them, are going to be very historically unique human beings. And the leader of an Earth organization who makes a commitment to history–of humans living on Earth, to begin permanent settlement/occupation of not the moon, but of another planet–this leader will have a legacy for history that will supersede Columbus, Genghis Khan or almost any recognized leader. I guess religiously, that might include Jesus Christ and Mohammed and Abraham and David. They are obviously going to be remembered for their contribution to human history.

This will probably take two decades from commitment, and result in the non-return of humans from the surface of Mars. They would occupy a permanent Mars base, built previously from a moon of Mars, and my favorite selection is the inner moon, Phobos. Over a period of three different visits to the moon Phobos, the Mars base will be assembled remotely, from sequentially-landed large elements, habitats and whatever else, that are to become the permanent base.

How would the Mars Cycler get people to Mars?

Aldrin: I was motivated to improve the U.S. strategy of going back to the moon in 1985. That’s a long time ago. Going back to the moon would be a great achievement for tourism adventure flights. But it resulted in the Aldrin Cycler, which was published in ’86. It included cycling spacecraft between Earth and Mars, back and forth. It was really the first major disclosure of a new strategy of transportation for permanent transportation economics, of delivering human beings from the Earth to Mars.

The cycler consists of two mated together, side-by-side connected, interplanetary spacecraft. It’s the very basic component of future projections by my USV, unified space vision, which is my personal-experience replacement for President Bush’s vision for space exploration.

I tried to change the name of the book, but it was just too late to add an “s,” so it would be “Missions to Mars,” not “Mission.” My plan for the future is unique in a sense, because it implies human permanence at Mars. Humans transported to the surface of Mars by cycling spacecraft. It’s kind of complex, but every other synodic period, a cycler delivers to Mars. That means you would need two cyclers, one for the first, third, fifth, ninth odd number of 26-month opportunities, and the other cycler, for 2, 4, 6 even-numbered synodic periods. It’s a major improvement on the Aldrin Cycler, that was first discovered/invented/worked out, but not patented, in 1985.

Aldrin: It unifies five elements of space policy: 1) exploration; 2) science; 3) development; 4) commercial; and 5) security. Many, many people have verified that that is national space policy, those five items. We unite those five elements strategically by comparing and integrating our five elements of space policy with every other country internationally. Like ESA, JAXA, China, India, Germany–all of those space policies of other internationals are essential to be integrated into my unified space vision, because of the moon. At the moon, the U.S., in my opinion, needs absolutely to lead an international lunar base. This discourages commercial human landings on the moon by government subsidy. Let’s not have the taxpayers paying for a big rocket, a lunar landing, so that commercial human beings from the U.S. can dig up and mine and occupy the international lunar base.

In the book you mention that your nickname at NASA was “Dr. Rendezvous,” because your MIT doctoral thesis was about two piloted aircraft meeting in space. Is that why are you interested in this cycler concept?

Aldrin: It’s ironic. My selection as an astronaut was unique because I had not been trained as a test pilot. So my application, along with Ed White, my very close friend who graduated West Point and was killed in the Apollo [1] fire, he and I applied in 1962 for the second group. Ed was selected, I was not. I made it in the 1963 selection of astronauts, because of the change of not requiring test pilot training, which I had intentionally avoided. But I had written my thesis on space rendezvous at MIT, and was very motivated for the space future, in the Air Force or anywhere else.

That’s some background as to why you are interviewing me after two autobiographies. In 1973, I wrote “Return to Earth,” which was made into a movie in 1976. But it dealt only with mental health issues and depression. It did not include alcoholism recovery, and I now have 34 years of sobriety from alcohol. The most recent autobiography, “Magnificent Desolation,” described my recovery from alcoholism. 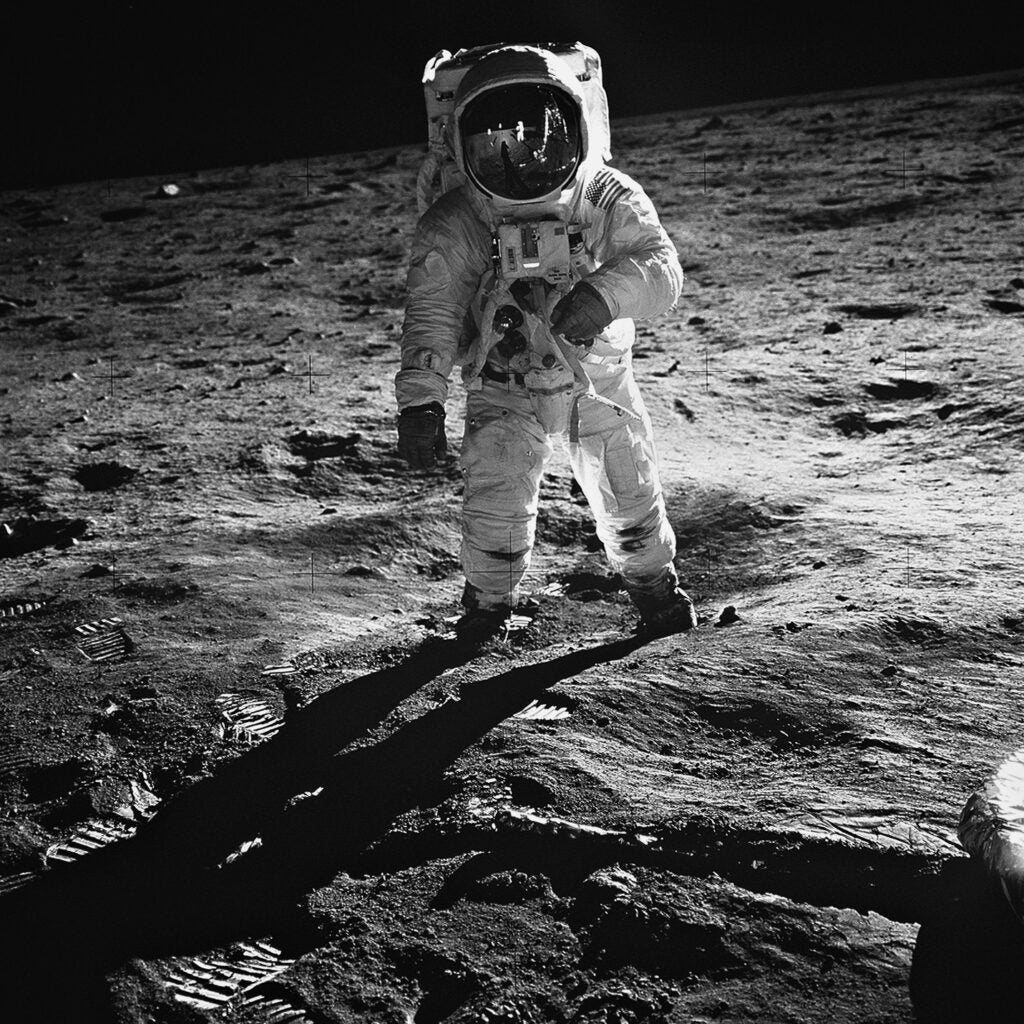 Buzz on the Moon

In the new book “Mission to Mars,” moonwalker Buzz Aldrin argues for a new “Unified Space Vision” that ends in a permanent human settlement on the Red Planet.

What do you think of space tourist Dennis Tito’s plan to swing around Mars and back? Is this how you envision a future Mars Cycler working?

Aldrin: Sort of. It has the essence of a gravitational swingby of Mars, to bring the spacecraft back in as short a time as possible. Those times occur in 2016 and 2018 but not again until 2031. We probably can’t make 2016, but we can make 2018. That would bring the spacecraft back, if successful, just prior to the 50th anniversary of the first lunar landing.

Does the cycler plan borrow a page from modern airlines?

Now there is the commercial potential of transportation of human beings from the surface of the Earth, to Earth orbit and potentially to swing by the moon, and back to Earth. Or to swing by Mars and return to Earth, and be the delivery system of us, or international human beings, from Earth to Mars. Then we’re not expending the vast resources that would be needed to bring people back from Mars.

How should we get started? What’s the most important aspect?

Aldrin: The first element, before the retirement of space shuttle, was supposed to be to deliver a test bed to the space station. Long-duration life support systems, separate from the station but connected. The second element would be a prototype of an interplanetary habitation module, delivered to the space station, which could become a safe haven for astronauts at the station to abandon a disabled space station, separate in this hab module, and be returned to Earth. The third, fourth and fifth iteration is further testing of the interplanetary space vehicle, referred to in my book, in low-Earth orbit, to the moon, in cycling orbits, to L2 and L1, and to lunar surface as the first element of the international lunar base. That would be to test radiation, systems, etc to support other nations’ human beings on the surface of the moon.

July 2019 would be the 50th anniversary of the Apollo 11 landing. It would be the ideal time, in my estimation, for the president elected in 2016 and 2020, from whichever party, to gain the legacy of the two-decade commitment to permanence of human beings on the planet Mars. That is the essence of Buzz Aldrin’s Unified Space Vision. It’s a very unique and beautiful opportunity for U.S. leadership. 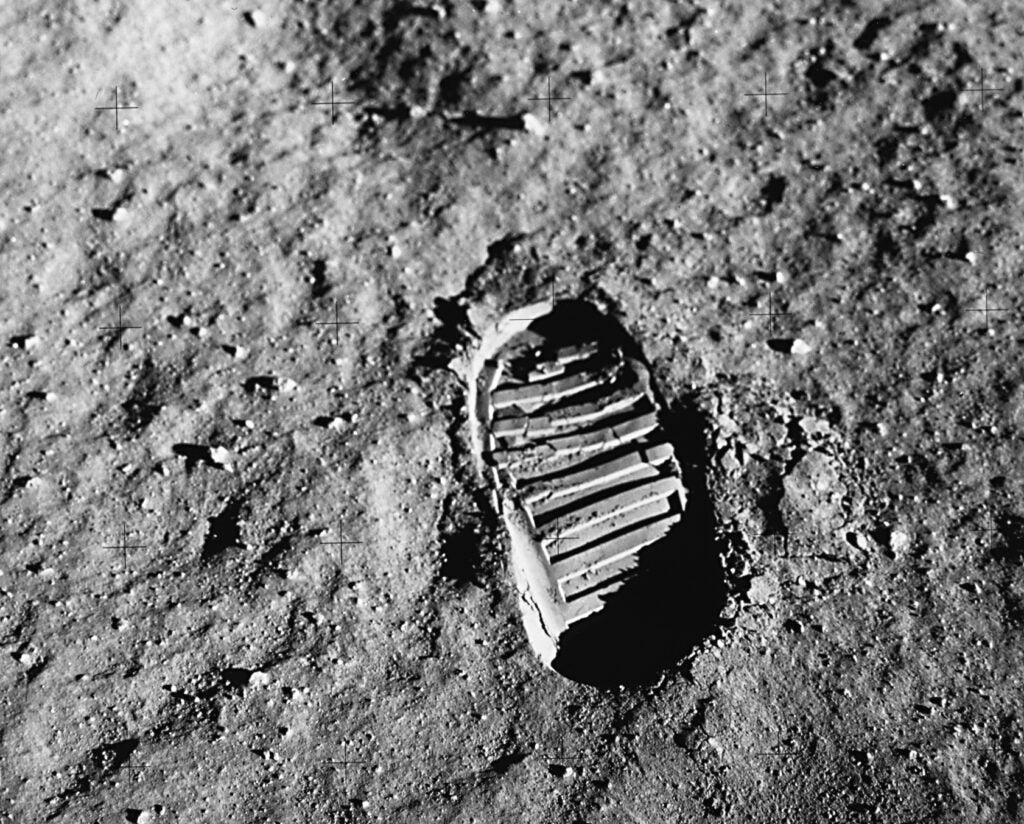 The Most Famous Footprint In History

Buzz Aldrin’s photo of his own boot print on the moon appears in his new book “Mission to Mars,” out today.
Mars
Solar System
Space