That means future space colonizers may be able to farm their own food using local dirt. 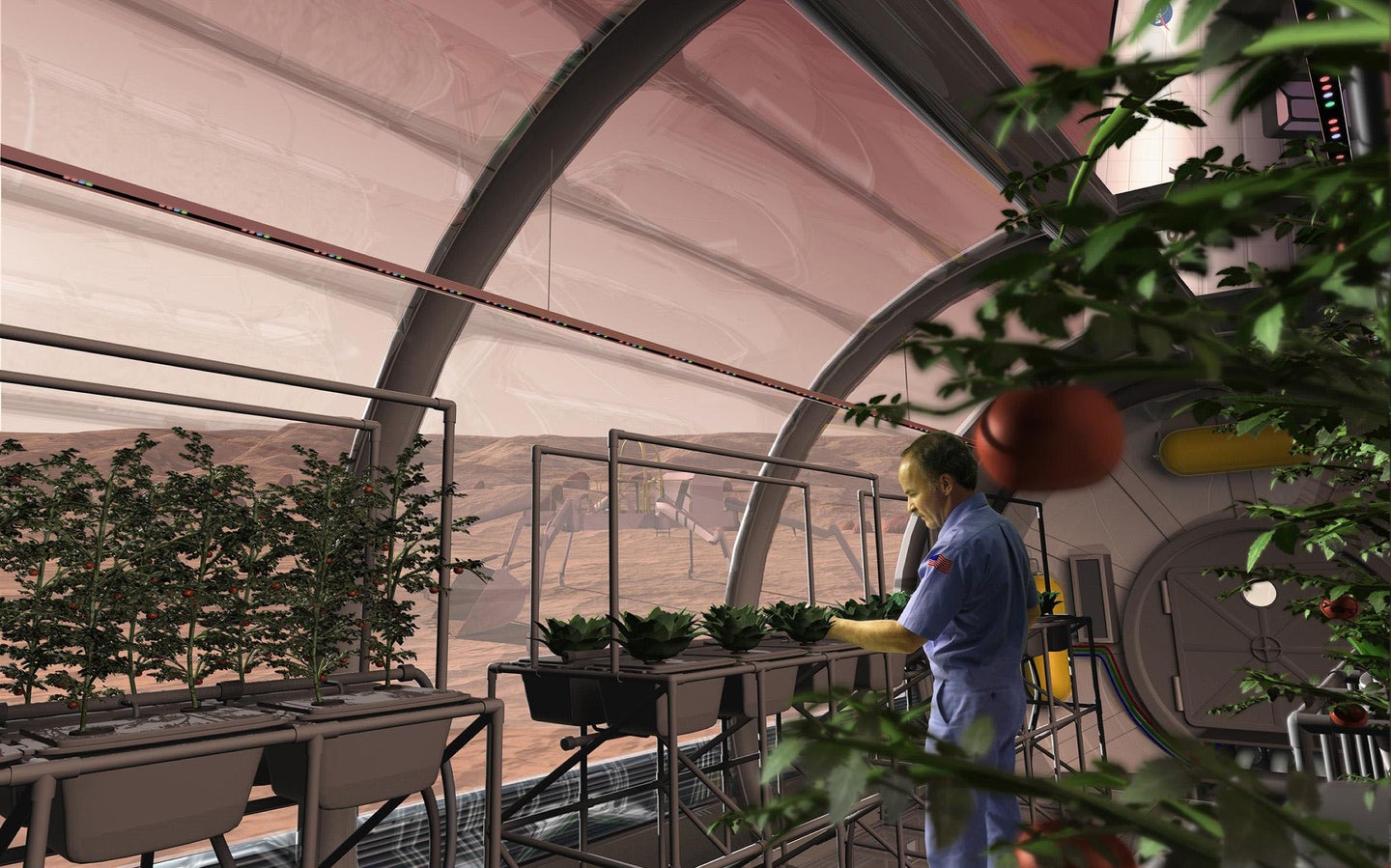 Long-term settlements on Mars could potentially grow their own food. NASA
SHARE

If humans ever set up permanent bases on the Moon or Mars, we’ll need to be able to grow our own food there. To find out whether that’s actually possible, a team of scientists in the Netherlands planted 14 plant species in soils that simulate the Martian and lunar regolith. It turned out that the Martian soil simulant was better than some Earth soils for growing plant life, which is good news for astronauts. There are a few caveats, but we’ll get to those later.

First, you’re probably wondering what the heck is a soil simulant, and where does it come from? NASA makes them out of our very own terra firma, and you can buy your own here. (Cost: $7.50 for 2 ounces.) The Mars simulant (PDF) comes from a volcanic cone in Hawaii, and has a chemical composition similar to the Mars dirt that the Viking 1 lander analyzed. The Moon simulant (PDF) comes from volcanic ash deposits near Flagstaff, Arizona.

Real Moon and Mars soils appear to contain the essential ingredients that plants need, except for reactive nitrogen (and an abundant water supply). Though the simulant soils closely match the composition and grain size of the real stuff, they also contain trace amounts of the nitrates and ammonium—the nitrogen-based compounds that plants love. So the simulant soil isn’t a perfect model.

For their experiment, the scientists ordered piles of fake Mars and Moon soil, then scooped them into small pots and planted 14 different species inside — including carrots, tomatoes, wheat, some common weeds, and four species that turn atmospheric nitrogen into plant food. The scientists also planted seeds in some nutrient-poor soil that they dug up from 30 feet below the river Rhine, for comparison. All in all, they planted 840 pots.

Other scientists have attempted to grow plants in lunar and Martian soil simulants before, but this study appears to be the largest and most extensive to date. And the results were promising. Most of the crops were able to grow on all three kinds of soils. In fact, many thrived better on the Mars simulant soil than the poor river soil — both in terms of the number of plants that germinated, flowered, and survived to the end of the 50-day experiment, as well as in terms of the total biomass that grew from each pot.

Plants fared worse on the lunar soil. None of the leopard’s bane or field mustard survived to the end of the experiment. Common vetch, a nitrogen-fixing plant, didn’t even germinate. That suggests to the researchers that lunar farmers may need to inoculate the regolith with nitrogen-fixing bacteria instead. That, or use human feces as a manure to provide right kind of nitrogen.

“Our results show that in principle it is possible to grow crops and other plant species in Martian and Lunar soil simulants,” the researchers write. “However, many questions remain…” such as how much water can the soils hold (because the ones in this study seemed to dry out pretty quickly) and how do gravity, light, and other conditions on other worlds affect the plants’ ability to grow?

The study was published in the journal PLOS One.