LUNEX: Another Way to the Moon

Before the United States had a space agency, the Air Force was researching how to send men to the Moon.... 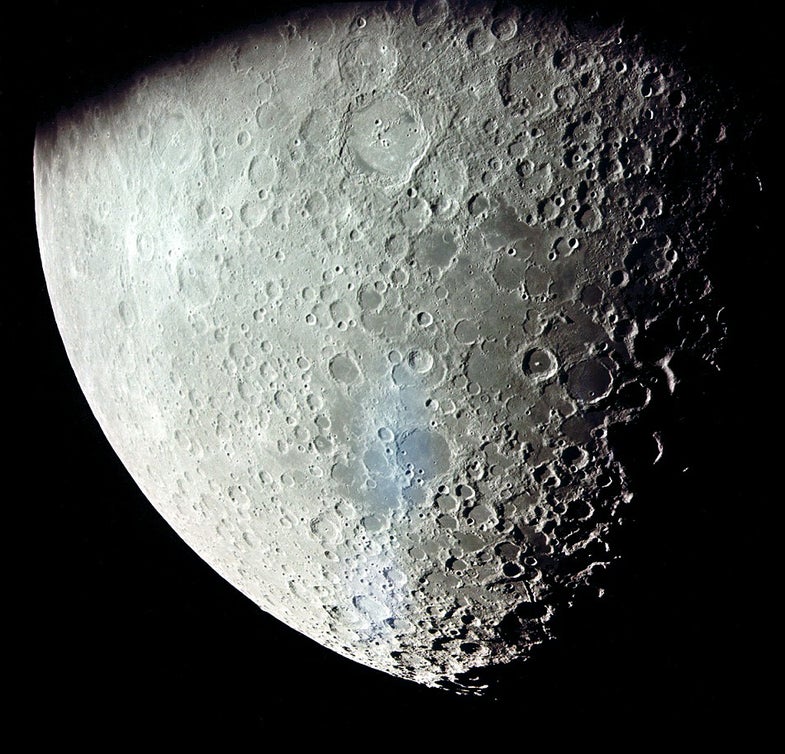 Before the United States had a space agency, the Air Force was researching how to send men to the Moon. Beginning in 1958 after the Soviet Union launched Sputnik, the USAF Air Research Development Command initiated a series of Industry-Air Force studies to examine the military potential of space operations including this lunar goal. The resulting program was an audacious, four stage program to land men on the Moon by 1965. Scaled back and named for the original first stage, Man in Space Soonest, the Air Force’s program was passed over in favor of NASA’s civilian program, Project Mercury.

But not launching America’s first manned spaceflight program didn’t deter the Air Force from participating in space. Four days after President Kennedy’s May 25, 1961 call for the nation to land a man on the Moon and bring him safely back to Earth within the decade, the Air Force offered to complete this goal by 1967 for just $7.5 billion with its own lunar expedition plan called LUNEX. The next step after this initial landing was to establish a permanent base on the lunar surface. It was, as Commander of the Space Systems Division of the Air Force Systems Command Major General Osmond J. Ritland wrote in the proposal’s forward, a way to give the national space program a much needed goal.

LUNEX was the culmination of years of work; previous mission proposals from Air Force industry teams had been honed into this most economical, reliable, and feasible program. And the benefits went beyond a manned lunar landing. LUNEX promised to showcase American technological superiority over the Soviet Union in the short term, and in the long term expected to develop the hardware and proficiency that would secure America’s role as a leader among spacefaring nations for decades to come. It would also score a major coup for the country, capturing the world’s imagination with an historic feat.

But the rationale behind LUNEX went further. The program was presented as a preemptive strike against the Soviet Union. Air Force intelligence suspected that the Soviets, having launched the first satellite, first biological payload, and first manned orbital mission, were likely to continue developing technology with an eye towards securing more firsts. Particularly in unmanned reconnaissance missions. The LUNEX proposal sought to get men to the Moon before the roving laboratories and tankettes the Air Force expected the Soviet Union to launch before long.

And of course, another strong motivating factor behind LUNEX was to increase the US’ military involvement in space. Knowing that the Soviets didn’t separate its military and civilian payloads, establishing an American military presence in space would leave the country poised to respond to future hostile satellites or missions.

Like the bulk of the manned spaceflight proposals that appeared in the wake of Sputnik, LUNEX took a brute force approach to the goal of landing men on the Moon. The mission followed a simple, direct ascent profile. A three-stage rocket would launch a manned spacecraft directly to the Moon where it would make a soft landing on the surface. After a brief sojourn exploring the immediate area, the crew would launch in that same spacecraft and fly directly back to Earth. 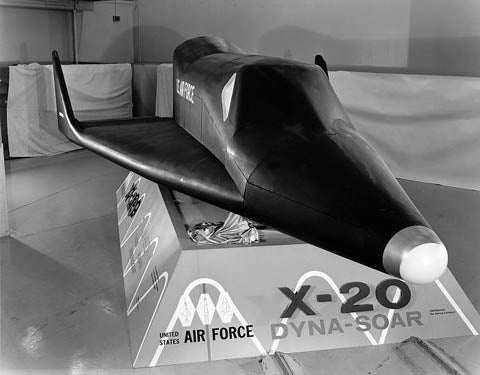 A mockup of Boeing’s Dyna-Soar.

At the heart of the Lunex payload was the Earth return vehicle. This core module of the spacecraft, housing the guidance, navigation, and environmental systems to get to the crew to the Moon and back in the comfort of a shirtsleeves environment, was also fitted with the necessary thermal protection systems to return unscathed through the Earth’s atmosphere. Reminiscent of the Air Force’s own Dyna-Soar, it was a lifting reentry vehicle: vaguely triangular with a flat bottom and stubby wings to generate lift. It would launch vertically atop the three-stage rocket then use the same kind of responsive controls as an aircraft to land like an unpowered airplane on a preselected runway at an Air Force Base.

This Earth return vehicle would begin its trip to the Moon atop a lunar launching stage and a lunar landing stage; fully stacked, this was a 134,000 pound payload. Using a lunar horizon scanner, a doppler altimeter, and a terminal guidance program relying on pre-placed beacons, the lunar landing stage was designed to set this full payload down at less than 20 feet per second. It’s job done, it would stay on the Moon. It was the lunar launch stage’s job to propel the Earth return vehicle from the lunar surface and set the crew on course back home. This stage would be jettisoned before reentry, leaving the lifting body alone as the returning payload.

A modified mission with modified hardware could undertake a one-way mission, delivering cargo and supplies to the Moon for a crew.

This basic profile was divided into six distinct stages: Earth ascent, Earth-Moon transit, lunar descent, lunar ascent, Moon-Earth transit, and Earth reentry. Each stage had its own intricacies and, importantly, abort procedures to bring redundancy and reliability into mission. The main crew vehicle would have full launch abort capabilities. Direct and circumlunar abort options were available in the outbound leg of the mission.

This direct, six-stage mission was a best case scenario, but in 1961 there were a lot of technologies that needed to be invented before this mission could fly. Notably unexisting was the launch vehicle called the Space Launch Sytem. Key decisions weren’t yet made, like what fuel it would use. The main question was over the first stage, whether it would be powered by the same liquid oxygen and liquid hydrogen mixture that would power the second and third stages or an equivalently powerful solid fuel. In either case, a rocket capable of delivering 6 million pounds of thrust at launch was needed to get LUNEX off the ground.

Because of its centrality to the mission, the SLS was listed as the main pacing item to keep the LUNEX program on track for a manned lunar landing by 1967. But there was already a backup plan in place should this big rocket fall too far behind schedule: the equally unknown mission architecture of Earth orbit rendezvous. Rather than use one rocket to send the full payload straight to the Moon, the Air Force foresaw an alternative plan where the pieces were assembled in Earth orbit before beginning their trip to the lunar surface. Though this mission structure meant developing smaller, less powerful rockets, it also hinged on gaining a whole new understanding of orbital dynamics. A separate program called SAINT was proposed to shadow LUNEX, developing rendezvous capabilities should the lunar mission need it. 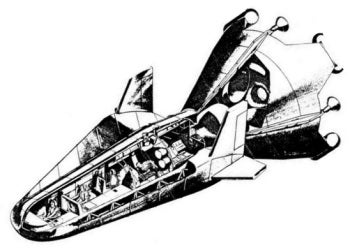 But the rocket wasn’t the only missing piece of the puzzle. Another key technology that didn’t exist in 1961 was the LUNEX crew vhicle and all the systems that would facilitate the mission. both the physical spacecraft and all its systems. The Air Force would have to develop and test the guidance and control systems, the thermal protection system, and the life support systems for this main module. The lunar landing stage also demanded development of new technologies, principally the doppler altimeter, lunar horizon scanner, and precision descent engine. The lunar launching demanded development of the ascent guidance system to ensure the crew launched towards the Earth following the right trajectory.

The other big unknown at the time was the lunar environment. The Air Force would need to know more about the challenges of operating on and around the Moon for LUNEX to achieve its goal. As such, the Air Force proposed sharing data with NASA; the space agency was planning to launch the Surveyor probes with the goal of understanding the lunar composition. Sharing this information with the Air Force would enable the LUNEX program to come to fruition.

Though it may look like the sheer number of unknowns would have made LUNEX impossible within the time frame the Air Force proposed, it wasn’t in a very different state than Apollo was in in 1961. When Kennedy set the nation on a course for the Moon, NASA had a similarly half-formed lunar program called Apollo on the books that was marked by unknowns and unavailable technologies. Also hoping to land a man on the Moon by 1967, NASA’s own mission called for a direct ascent profile with Earth orbit rendezvous as the backup method should the massive Nova launch vehicle prove unfeasible. It wasn’t until 1962 that NASA settled on the lunar orbit rendezvous and the mission structure we’re familiar with today, a decision that played no small part in facilitating the lunar landing within the 1960s.

Had LUNEX flown instead of Apollo, the current landscape of spaceflight might be very different. For one, the 1960s would have ended with working technology closer to the shuttle than the Apollo capsule-inspired spacecraft. This technology might have fed naturally into subsequent manned spaceflight programs; instead we saw NASA radically revise its approach to spaceflight after Apollo with development of the space shuttle in the name of reusability and efficiency.

LUNEX would also have left the country with a stronger military presence in space. While this likely wouldn’t have changed the inspirational aspects of the lunar landing program, it might have had a profound effect on the denouement or resolution of the Cold War. A military-based space program would have forced very different guidelines in the treatises put in place to control weapons in space, possibly opening enough loopholes to allow space to become a fully fledged battle ground, the eventuality President Eisenhower sought to avoid when he established NASA as a civilian space agecy in 1958.