First scientific findings released from the fake mission show that “maintenance of human behavior” was difficult. 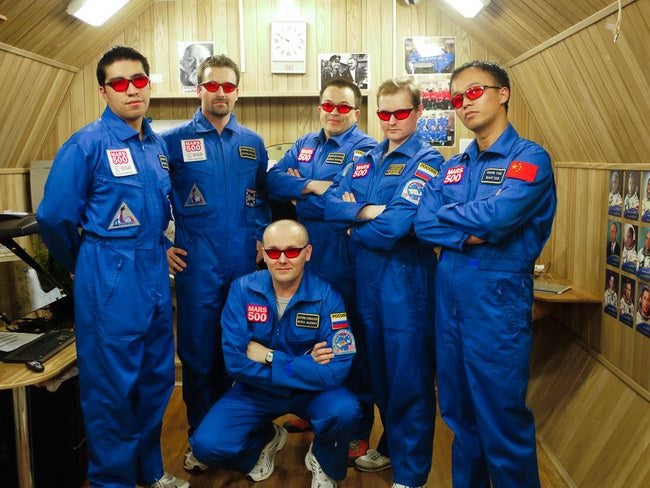 For a while there, life in a bunker designed to simulate a 520-day mission to Mars looked kind of fun. The “cosmonauts” had video games, fake fireplaces to simulate a Christmasy scene, and an unbelievable sense of patience as they sat through a false journey to the Red Planet and back. But it turns out it was really just incredibly boring. And the word sat is key, because that’s about all they did.

Space biomedical scientists are publishing the first crop of research papers to stem from the Mars500 mission, which involved the voluntary sequestration of three Russians, a Chinese man, a Frenchman and an Italian-Colombian man inside a small metal bunker. The 17-month mission, unprecedented on Earth or in space, was designed to measure how humans would react to long-term exposure to enclosed spaces and disturbed circadian rhythms, among other problems. One major health problem turned out to be hypokinesis, or uber-sedentariness.

Sedentariness increased across the whole mission, with a dramatic drop in activity during the first three months. So-called “active wakefulness” continued to drop for the following 13 months. In the last 20 mission days, the crew’s awake time and activity time rose sharply, and their sleep and rest times decreased sharply. There was no extra work to do, however–the crew just became less sedentary on their own. They knew they were about to finally get out.

The crewmembers had trouble sleeping at first, but in the second half of the mission, they got plenty of rest–673 hours more sleep in the second half of the mission relative to the ﬁrst, the study says. Still, this was fitful sleep, according to their own reports and wrist-monitor evidence. This may have had to do with their loss of circadian rhythms, according to the study’s authors. This is interesting for future space travelers, because it suggests that even when people can control their light exposure and physical activity, there’s just something about the Earth’s day-night rhythms that we can’t replicate.

What’s most interesting about this study is the parallel the authors draw between the crewmembers’ sedentary behavior and that of torpor–or hibernation. Metabolic activity decreases when animals hibernate during winter, and something a lot like that was going on here. A pretty active area of sleep research continues to show that artificial lighting, along with conflicting schedules for work, school and even television, contribute to sleep problems and associated metabolic changes. These in turn can contribute to obesity, the authors point out.

“The essential need for humans to maintain sleep–wake activity cycles synchronized to the circadian biology that temporally coordinates human health and behavior appears to be as important on Earth as it will be en route to Mars,” they write. The study is published today in the Proceedings of the National Academy of Sciences.