BeerSci: How Do We Measure The Bitterness Of Beer?

A few weeks ago, Team BeerSci got the chance to tour one of our favorite breweries: Victory Brewing Company in Downingtown, PA. While there, we spent a fair amount of time in the lab with Victory’s quality control chemists, learning about how a relatively large independent brewery manages to create excellent, consistent product week in and week out. The experiences we had during that visit will be the basis for a series of posts on BeerSci, from the importance of an efficient grain crush to the glories of the in-line beer centrifuge. That’s right: the in-line beer centrifuge. The beerifuge, if you would.

This week, I want to talk IBUs. That is, International Bitterness Units. The topic has come up a couple of times in past columns. It’s one of those terms that is somewhat misunderstood by the general public due to some breweries hijacking the term to market their highly hopped beers. I’d like to demystify IBU, and hopefully I’ll do so over this column and next. As many a writer before me has discovered, beer bitterness, actual or perceived, is a very complex topic.

The first thing to understand is that the International Bitterness Unit, from a chemist’s and professional brewer’s perspective, is a simple measurement of the bitterness of a beer. Not the “hoppiness” and not even how bitter you, the drinker, might perceive the beer–just the levels of a class of bitter compounds found in the finished brew. It’s not the only method to measure a beer’s bitterness, but many brewers use it and now consumers are starting to demand that their beers have a specific IBU level.

The IBU scale starts at 0 and is, in theory, open-ended at the top. In reality, the compounds that make beer bitter are only somewhat soluble in water, so there’s an upper limit to how many of those molecules you can shove in a unit volume of beer. (I’ve seen “110 IBU” mentioned as the most bitter a beer can get, but I have yet to find an official source for that, so take that number with some skepticism.) Additionally, those who study human taste perception claim that human bitter taste receptors max out at some point — although at which point this happens is still hotly debated.

IBU ratings as a style guide are fairly general, but think of it this way: your average American lager, such as Budweiser, has 10 IBUs. Your average IPA has between 40 and 60. Double IPAs and other highly hopped styles clock in between 60 and 100. 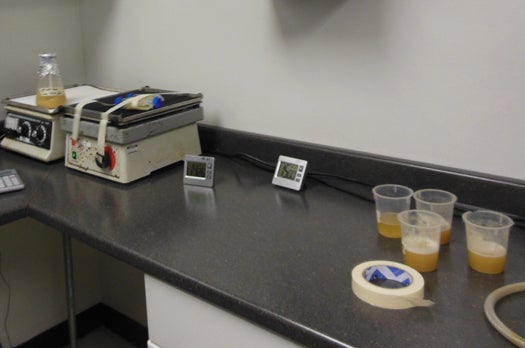 Typical day in the lab. On the right, samples of beer from the brewery. On the left, conical vials containing beer and isooctane are taped to the shake table.

Measuring IBUs has been standardized by the American Society of Brewing Chemists, a professional organization that covers pretty much everyone who cares about the nerdier side of brewing. They publish established protocols as industry standards. The chemists at Victory follow these protocols for a variety of different QC concerns, IBUs being merely one of many. In the ASBC methodology, chemists are looking primarily at the concentration of the major class of bittering compounds, the isohumulones.

To measure IBUs, Victory lab chemist Marisa Egan first takes samples of beer (these can be gleaned from the fermenters, resting tanks or even finished product) and puts each beer into its own conical vial with some hydrochloric acid and an organic solvent called isooctane (aka 2,2,4-trimethylpentane). Isooctane and water are not miscible — that is, they stay separated in layers. Isohumulones are somewhat soluble in water under normal beer conditions, but are much less so once Marisa acidifies the beer, which drives the isohumulones out of the beer and into the isooctane. The conical vials sit on a device that shakes the vials for 15 minutes. The two liquids form an emulsion; the increased contact surface area between the two liquids facilitates the transfer of the isohumulones from one liquid to the other. After the 15 minutes, Egan centrifuges the vials for at least seven minutes to break the emulsion. She then draws off a quantity of the isooctane (now enriched with isohumulones) and puts it into a cuvette. Cuvettes can be glass, quartz or plastic — I didn’t get a good look at which variety Egan uses, but for our purposes it doesn’t matter what the material is, so long as its optically clear at the wavelengths one cares about. Egan places the cuvette is put into a UV-Vis spectrometer, (UV = ultraviolet; Vis = visible). A beam of light passes through the cuvette and to a detector on the other side of the machine; molecules in solution in the cuvette will preferentially absorb certain wavelengths; in this case, Egan is looking for compounds that absorb 275 nanometer-wavelength light only.

Once Egan gets that absorbance number, she does a quick calculation and gets…IBU. 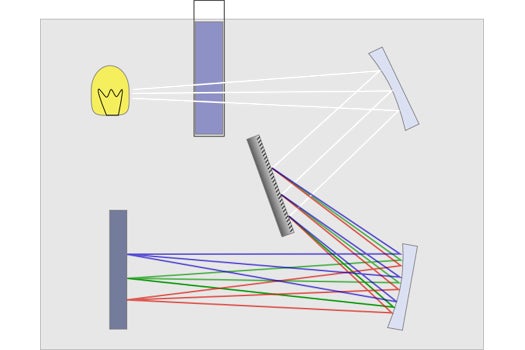 Inside the UV-Vis Spectrometer

White light passes through the sample cuvette; compounds in the sample will preferentially absorb at certain wavelengths. The UV-Vis machine then measures the spectrum of light that reaches the detector. In the case of an IBU determination, brewing chemists are only concerned how much 275 nanometer light the sample absorbs.

When I asked Egan about the IBU measurements and why she was doing them, she explained that as brewers, she and her colleagues looks at IBU as a measure of the potency of the hops, and therefore the consistency of the product. Victory is the second largest American brewery still using only whole-leaf hops in their brewery, rather than pellets or extract or whatever other advanced hop products are on the market. (Sierra Nevada is the largest.) But while whole leaf hops have many advantages, they do tend to age more quickly than pellets. When hops age, one thing that drops is their humulone content. Humulone is the precursor to isohumulone; the conversion happens when brewers boil the hop-loaded wort. If the humulone content goes down, the available amount of isohumulones — bitterness — in the beer also goes down. In other words, Victory’s brewers don’t go out to make a beer with a specific IBU rating, they use IBUs as a gauge to ensure that they’re consistently hopping their beers properly, given that the hops are constantly changing while in storage.

Since beer is something that is meant to be tasted, Egan doesn’t just trust the spectrometer-measured IBU rating of each batch. If she notices something wonky in the IBU ratings, she consults the results of tasting panels done on the same beers. If one of the brewery staff notes a lack of hop presence or other off-flavors associated with hop degradation in the same batch as the weird IBU result, the brewers can go back and tweak the recipe to bring it back into line.