Want to (sort of) relive Apollo 8? In honour of the 45th anniversary of this awesome flight, I’ll be live... 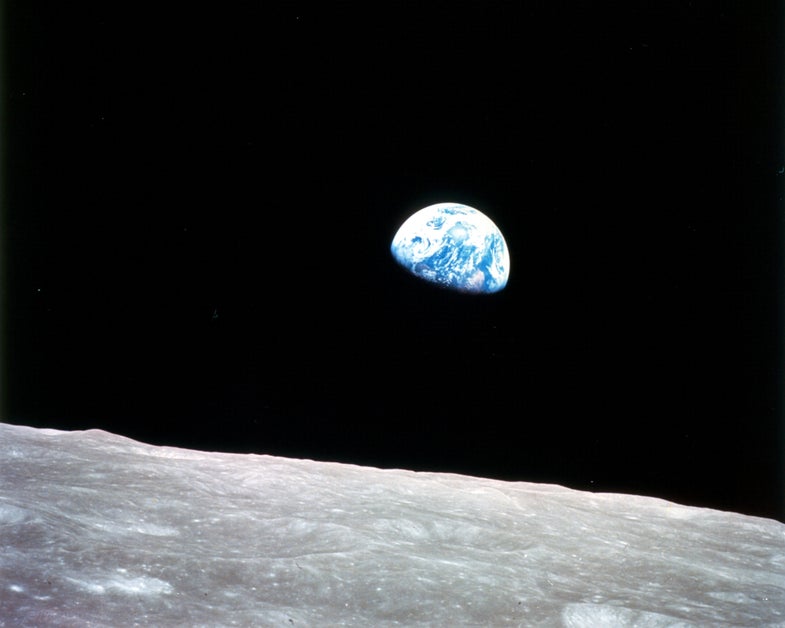 Want to (sort of) relive Apollo 8? In honour of the 45th anniversary of this awesome flight, I’ll be live tweeting major mission events, complete with relevant images and video clips, starting with crew ingress at 4:58 am EST on December 21! Follow me, @astVintageSpace, for a not-necessarily-complete-but-still-fun walk through history!

Tomorrow marks 45 years since NASA launched Apollo 8, an absolutely huge mission for the agency on its path to the Moon’s surface. Launched on December 21, 1968, it was the first time men – astronauts Frank Borman, Jim Lovell, and Bill Anders – went into lunar orbit and also the first time the Apollo command-service module flew the mission it was designed to fly. But there were also ample opportunities for a hardware failure to not only jeopardize the flight but put the crews lives in danger. There were certain disaster scenarios NASA couldn’t prepare for, but for those it could the agency developed a series of alternate mission plans designed to salvage as much data from the mission in spite of a major failure.

Achieving these goals called for a straightforward flight plan on which every piece of the Apollo launch vehicle and spacecraft would have to work perfectly. All three of the Saturn V rocket’s stages, the the S-I, the S-II, and the S-IVB third state, would have to fire in perfect sequence to put the crew into their Earth parking orbit. After two or three revolutions during which time the crew would run checks on their spacecraft, they would fire the S-IVB stage a second time to gain the momentum they needed to leave Earth orbit on a course for the Moon.This was the translunar injection or TLI burn. Twenty minutes later they would separate from the S-IVB stage, leaving them with just the service module’s Service Propulsion System for all subsequent burns, and there were many.

Depending on the accuracy of the TLI maneuver, there were four opportunities for mid-course correction burns during the 66 hour translunar coast using the SPS engine: one at TLI + 6 hours, a second at TLI + 25 hours, a third at lunar orbit insertion or LOI – 22 hours, and the last at LOI – 4 hours. The first majors SPS burn scheduled regardless of trajectory came once the crew was at the Moon. Two lunar orbit insertion or LOI burns would put Apollo 8 into an elliptical, stable parking orbit around the Moon from where they would perform lunar landmark tracking and photographic tasks, scoping out possible landing sites and gathering a wealth of data that would be vital to future mission.

After 20 hours in lunar orbit would come the biggest nail biting moment of the mission: on the far side of the Moon, out of radio contact with the Earth, the crew would fire their SPS engine again for the trans-Earth injection or TEI burn that would put them on a course back to Earth. Again, there were course correction opportunities built into this trans-Earth coast phase, one at TEI + 15 hours, one at TEI + 30 hours, and one two hours before Earth entry. Just before reentering the atmosphere, the crew would pyrotechnically separate the command module from the service module and ride in the gumdrop shaped spacecraft through the Earth’s atmosphere to splashdown in the Pacific Ocean. 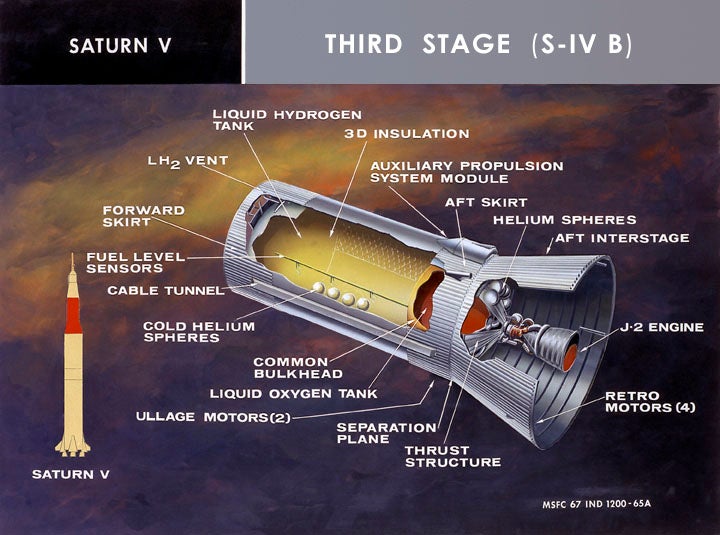 A schematic of the S-IVB upper stage.

This flight profile, considering the more complicated lunar landing missions to come, was fairly straightforward. But there were multiple points in the mission where a failure could jeopardize not only the flight but put the astronauts’ lives in danger as well. The biggest possible failure, and the one that NASA could easily plan a contingency around, was a failure of the S-IVB stage. Even though the crew would jettison the rocket stage early on in the primary mission, there were multiple scenarios where a premature shutdown of this stage could significantly change the course of the flight. Hoping to gain valuable experience even with an S-IVB failure, NASA developed a series of alternate mission plans.

If the S-IVB shut down during launch to put the crew in a low orbit, they could make up to two contingency orbit insertion or COI burns using the SPS engine. After fine tuning their orbit into a high elliptical, they would switch to the Alternate 1 mission plan, a 10 day Earth orbital command-service module flight similar to the one Apollo 7 had flown two months earlier. The same 10 day Earth orbital mission was the Alternate 2 mission plan. Should the S-IVB put the crew into Earth orbit but fail to fire for the TLI burn, the crew would use their SPS engine to adjust their orbit for before beginning the Earth orbital flight.

The only other failure of the S-IVB that could affect the mission was a failure during the TLI burn. Alternate missions in this case, Alternates 3a through 3d, depended on the spacecraft’s altitude when the S-IVB failed.

Alternate 3a and 3b accounted for a failure early on in the TLI burn that left the crew in Earth orbit anywhere between 115 and 28,800 miles. In this case, similar to Alternate 1, they would use their SPS engine to trim their orbit into the right altitude for a 10 day low Earth orbital mission. But if the S-IVB cut out later in the TLI burn, things got a little more complicated.

If the S-IVB failed and left the crew in an orbit between 28,800 and 69,100 miles, the SPS engine wouldn’t be able to trim the orbit for an Earth orbital mission. It just didn’t have enough fuel to make a big orbital adjustment and also fire to begin the crew’s atmospheric reentry. Instead, the crew would stay in this high orbit, saving their SPS engine until they were in the right position for the deorbit burn.

If the S-IVB failed and left the crew in an orbit higher than 69,100 miles, there was no alternative but to follow a free return trajectory profile. Adjusting their trajectory using the SPS engine, gravity would do the leg work in carrying the spacecraft to the Moon where it would whip around the far side before beginning its journey back to Earth. Once it returned, it would reenter the atmosphere directly; just like a lunar return mission, the crew wouldn’t stop in Earth orbit before reentry. 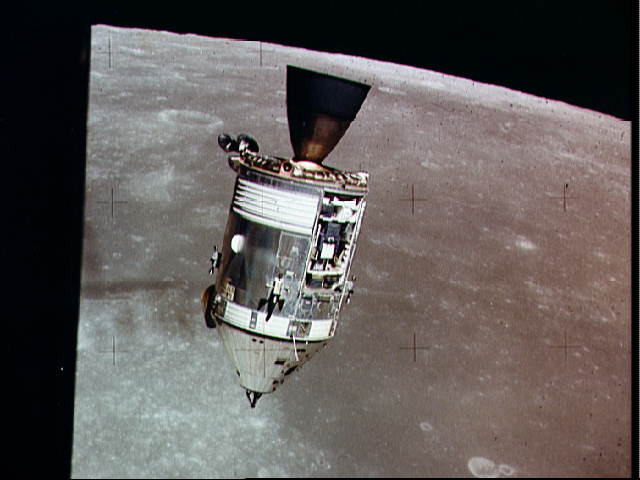 An SPS failure was considerably more disastrous than an S-IVB failure. An SPS failure wouldn’t demand an alternate mission; it would demand a crew rescue.

It was possible that the SPS could work perfectly through to the LOI burn then fail when the time came for the TEI burn, leaving the crew stranded in lunar orbit. It was also possible that the engine could fail during a coast phase, making mid-course corrections impossible. During the translunar coast, this could leave the crew on a trajectory where they would miss the Moon entirely and end up in a solar orbit or a trajectory that would end in an impact with the lunar surface. A failure of the SPS during the trans-Earth coast phase could see the crew miss their reentry corridor, causing them to skip off the Earth’s atmosphere. It could also see the spacecraft reenter too steeply, putting the crew at risk of burning up in the atmosphere.

There were no contingencies for these catastrophic failures. NASA had no recovery mission ready to launch, and it was likely the crew would run out of consumables before some resuce method could be devised. The most vital was air. There were only twenty lithium hydroxide canisters on board the spacecraft, enough to clean the air of toxic carbon dioxide for about two weeks. If a stranded crew ran out of these filters, they would quickly succumb to hypoxia.

NASA never had to turn to an alternate mission plan on Apollo 8, and the crew was never in immediate danger of losing their lives. The few anomalies that cropped up on the flight weren’t enough to mar the mission. In the post mission report, NASA called Apollo 8 “the most successful of the Apollo Program” and a “bold step forward in the development of lunar landing capability” in the post mission report.

Bold might be the best way to describe this flight. It was the third time NASA launched a Saturn V rocket and the first time it launched men, and it was only the second time a crew had flowin inside the command-service module. That everything worked as designed and the mission accomplished it’s main goals played a big part in NASA successfully landing men on the Moon before 1970.