The Lunar Lion is designed to land and then take off again across the surface of the moon. 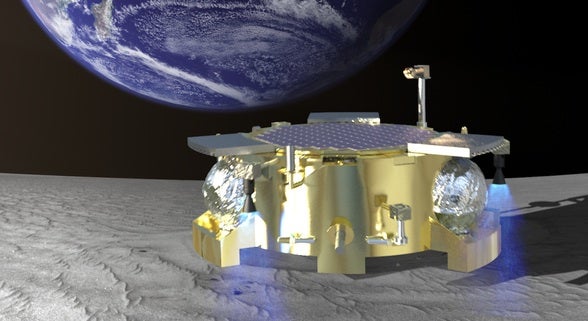 Just before winter break, students at Pennsylvania State University sat in a control room behind a two-foot-thick concrete wall. On the other side of the wall was a cryogenic rocket. As the rocket fired away, the students measured the temperature and pressure in different parts of the system, including fixtures they’d built for the rocket, all with their own handwritten computer code.

They were part of the Lunar Lion team, one of 18 teams still in the running for the Google Lunar XPrize. Lunar Lion is also the only team based at a university and comprised mostly of college students, led by Penn State staff and faculty. (Although at least one other team is a spinoff from a university.) If the Penn State students win, they could earn up to $20 million for their school. They’ll also have to have landed a rover on the moon, driven the rover at least 500 meters, and sent high-definition videos and photos back to Earth. Whichever team wins the grand prize, if any, will be only the fourth “team”—after the space agencies of the former Soviet Union, the U.S., and China—to make a soft landing on the moon.

“Our goal is really education and research,” Michael Paul, Lunar Lion’s director and a space systems engineer at Penn State’s Applied Research Laboratory, tells Popular Science. “What we’re doing, we hope, becomes a model for other universities.” Paul means in terms of funding. The Google Lunar XPrize is meant to stimulate the private spaceflight industry, so it requires its contestants be privately funded. The Lunar Lion team gets support from corporate and private donations and tries to work on a lean budget, Paul says. “One of the things that the students are learning is how to be frugal in their engineering.”

“One of the things the students are learning is how to be frugal in their engineering.”

With school back in session, the team is now seeking crowdfunding, too. It wants a little more than $400,000 to build and test a prototype of its design. For example, the team needs to finish testing that its cryogenic rocket engines, a design it licensed from NASA’s Johnson Space Center and will modify to fit its craft’s needs, work with the student-written computer system.

The overall design is an all-in-one model that combines lander and rover in one vehicle. That helps save money—”otherwise we’d have to build, test and pay for essentially for two spacecraft, two spacecraft that would be bolted together,” Paul says. The Lunar Lion craft will land on the surface of using small rockets, then use those same engines to “hop” the required 500 meters to win the prize. Although NASA’s recent Mars rovers have been wheeled, a hopping design could help the Lunar Lion move more quickly and agilely.

I talked briefly with Alwin Paul, an undergraduate engineering major who leads a Lunar Lion design team with another undergrad engineer, Patrick Gorski. Alwin Paul (no relation to Michael Paul) explained he’s responsible for making a hovercraft that will allow him to test the craft’s avionics. His group will also test the craft’s individual components, including a set of feet with a honeycomb structure that will collapse as the craft lands on the surface of the moon. The honeycomb feet need to absorb 13 Gs of impact and protect the craft’s delicate equipment as it lands.

The team has a little less than two years to get ready to fly. Michael Paul and his students have bought the $10 million ticket they need to hitch a ride with Phoenicia, a private launch provider based in California. They’re going up in a launch window around December 19, 2015.