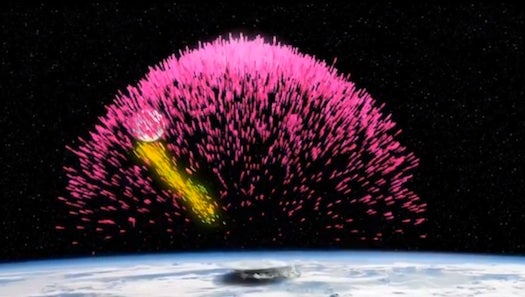 In this visualization of dark lightning, which is actually invisible, gamma rays are shown in pink. Highlighted in yellow are subatomic particles called positrons that the Fermi Gamma Ray Space Telescope detected from this dark lightning flash. The Earth is below and the moon appears behind the pink gamma rays. Screenshot from "ScienceCasts: Dark Lightning" by Science@NASA on YouTube
SHARE

Though its name sounds better suited to fantasy or sci-fi, researchers have recently gathered evidence that something called dark lightning exists, the Washington Post reported.

Like any evil twin, dark lightning appears to “compete” with the ordinary lightning during thunderstorms.

A person could be struck by dark lightning and not even know it.

Like ordinary lightning, dark lightning brews inside thunderclouds. In fact, it may be a competing way for the clouds to release their energy, says Joseph Dwyer, a lightning researcher at the Florida Institute of Technology. Dwyer has come up with a model explaining how dark lightning arises. His idea awaits further measurements for confirmation.

Scientists first began seeing hints of dark lightning from gamma ray measurements from satellites since at least the 1990s, according to this NASA video. Gamma rays, the most energetic wave in the electromagnetic spectrum, are typically associated with radioactive decay, nuclear detonations and supernova explosions. Dark lightning appears to be made of X-rays and gamma rays.

Although no one knows for sure, humans may have been struck by dark lightning before, most likely during an airplane ride, Dwyer told the Washington Post. Even that is unlikely: Pilots usually stay away from storms, and dark lightning flashes are rare compared to ordinary lightning bolts. If hit, however, plane passengers probably wouldn’t hear or feel the strike, but they would absorb what Dwyer estimated to be an entire lifetime’s worth of safe radiation.