Europa Is The New Mars: How Sci Fi Follows Science

With the upcoming release of the major motion picture Europa Report, a couple of Jet Propulsion Lab scientists explain how science fiction has evolved in response to our growing understanding of space. 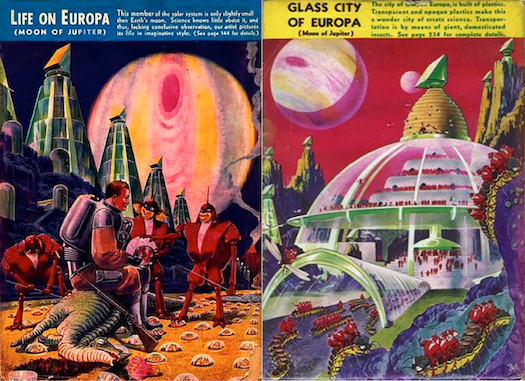 The cover heading for the 1940 issue is telling of how Europa figured into science fiction until recently: “Life on Europa (Moon of Jupiter): This member of the solar system is only slightly smaller than Earth’s moon. Science knows little about it, and thus, lacking conclusive observation, our artist pictures its life in imaginative style.”

As evidence has mounted in recent decades that Jupiter’s moon Europa hosts a potentially habitable liquid water ocean larger than all of Earth’s combined, NASA has made this ‘ocean moon’ an exploration priority. Excitement about the real possibility for life on Europa has prompted new lines of scientific inquiry and inspired science fiction authors to feature Europa in new works of speculative fiction. Before the 1980s, Europa figured into the pantheon of science fiction, but only as an exotic port of call, with little to distinguish it from a completely imagined planet except its name and location (such as in E.E. Smith’s Spacehounds of IPC). To understand Europa’s newfound prominence, we must understand a little about the history of planetary science and the mindset of the early science fiction writers of last century.

War of the Worlds, John Carter, ‘little green men.’ These familiar terms come from the golden age of 20th-century science fiction. Mars has inspired visions of advanced alien civilizations for more than 130 years, since Giovanni Schiaparelli’s first maps from 1877 showing ‘canali’ were confirmed and the new features sensationalized as great works of alien ingenuity by Percival Lowell in the ensuing decades. Scientists seriously debated the possibility of intelligent life on Mars for 40 years thereafter, until Lowell’s death in 1916. 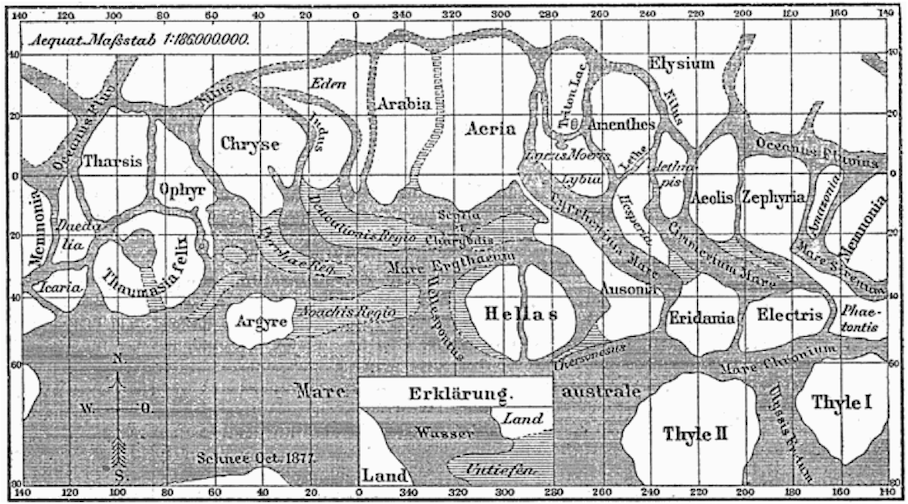 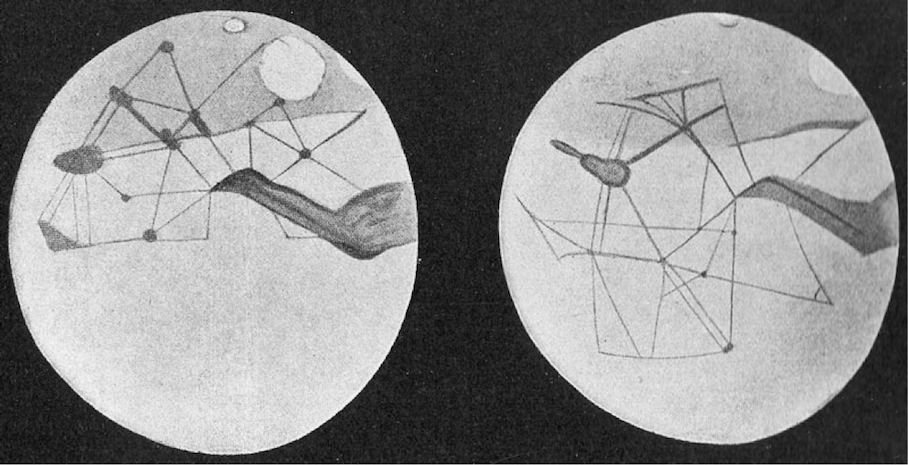 Mars captured the imagination of scholars and artists, creating the modern space science fiction genre at a time when an industry in pulp magazines and comic book was just coming into existence. Amazing Stories, most prominent among these, was started by Hugo Gernsback (eponym of the highest award in science fiction, the Hugo), who credited his inspiration to reading Percival Lowell’s work as a child.

The cover heading for the 1940 issue is telling of how Europa figured into science fiction until recently: “Life on Europa (Moon of Jupiter): This member of the solar system is only slightly smaller than Earth’s moon. Science knows little about it, and thus, lacking conclusive observation, our artist pictures its life in imaginative style.”

Storytellers of the early 20th century sent adventurers to planets, moons, and asteroids throughout the solar system. In radio, movies, books, and in magazines like Amazing Stories, planet-hopping adventurers sought fame or fled notoriety. The genre of science fiction took flight with the dawn of the space age. Luminaries Arthur C. Clarke and Isaac Asimov, who grew up reading pulp science fiction, explored the human implications of future technology in books like The Sands of Mars and The Martian Way. Ray Bradbury brought poetry to Mars in The Martian Chronicles. Phillip K. Dick’s We Can Remember It For You Wholesale (remade as the film Total Recall) brought paranoia, while Robert Heinlen used Mars as the source of new religious inspiration in Stranger In a Strange Land. Kim Stanley Robinson’s Red Mars series envisioned the first Martian colonies, by analogy to America, as a forge for technical innovation.

Fast-forward 100 years from Schiaparelli’s martian ‘canali.’ By 1977 NASA Mars exploration missions had shown Mars to be geologically interesting but lacking in obvious signs of life. In that year NASA launched the two Voyager spacecraft, designed to conduct the first scientific studies of Jupiter and Saturn. Partly in preparation for these missions, scientists had focused their attention on what could be gleaned from moons of the outer planets based solely on observations from ground-based telescopes: their distance from the Sun and their parent planet, their size, mass, and overall surface composition. 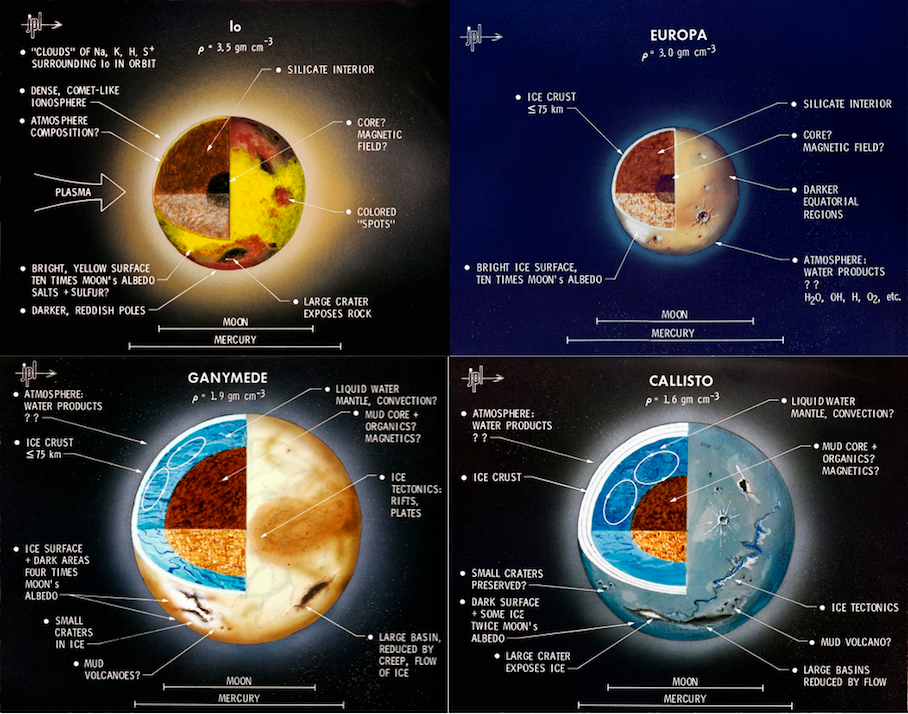 This was just before launch of the first Voyager spacecraft, showing Europa as a rocky body with 75 kilometers of ice. At the time, scientists thought Europa was too cold to have an ocean, but suspected oceans in the larger neighboring moons Ganymede and Callisto.

As early as 1952, Harold Urey, now famous for the Miller-Urey experiment simulating the chemical conditions of life’s origin on Earth, had noted that their densities and internal radiogenic heat might create oceans under Callisto and Ganymede. Urey’s former student, John Lewis, a planetary scientist, used basic chemistry and physics of the solar system’s oldest materials to predict, in 1971, extensive oceans under Ganymede and Callisto. He and his student Guy Consolmagno elaborated on these models in 1976 to tentatively propose “a convecting region of water” within Europa’s upper 100 km.

On the grand tour that is now carrying them beyond the edges of the solar system, Voyager 1 and 2 gave us the first detailed views of our largest planets and their moons, and our first confirmation that they could be present-day abodes for life. In the year of their launch, however, scientists were skeptical that Europa was large enough to retain enough heat from decaying radioactive uranium, thorium, and potassium to have an ocean. They had not yet considered tidal heating.

Prior to the arrival of the first Voyager craft at Jupiter, Stan Peale, an orbital dynamicist, along with his coauthors, published a prescient paper about the orbits of Jupiter’s closest large moons. Io, Europa, and Ganymede had long been known to orbit in a synchronized fashion. He reasoned (and mathematically determined) that this interaction should pull Jupiter away from Io at times, and at other times bring it closer. The overall effect would cause the moons to change their shape as Jupiter’s gravitational pull lessened and strengthened over the course of their month. He predicted that the effect might be strong enough to make Io more volcanically active than Earth. Voyager proved him right only a few months later. He also linked the tidal dissipation to the notion that internal heat might be intense enough in Europa and Ganymede to melt ice and possibly create oceans, but dismissed the idea on the basis that the ice should dissipate this heat by convecting in the same way Earth’s mantle does.

Arthur C. Clarke’s novel, 2001: A Space Odyssey, takes place at Saturn (giving a prominent role to the moon Iapetus); for the film adaptation, Stanley Kubrick changed the setting to Jupiter to avoid having to render Saturn’s rings. Interestingly, Clarke’s sequel, 2010, follows the film version of 2001 rather than the book. In both film and novel versions of the sequel, Russian cosmonauts visited Europa’s surface and received a warning to avoid Europa (which now often appears as the first comment to online articles about the moon):

The warning and the sequel came after the real-life Voyager spacecraft revealed Europa as a geologically active moon.

The Galileo mission followed up on the success of the Voyager spacecraft as the actual year 2001 approached, touring the Jupiter system. In doing so it revealed details of the complex geology seen by Voyager and provided new insight based on the moon’s response to Jupiter’s intense magnetic field. The new results indicate the ice is thin, between 3 and 30 km, and a salty liquid water ocean exists beneath the ice. The seafloor, around 100 km below the surface, has liquid water in direct contact with rock, a scenario strikingly similar to Earth’s ocean.

As all of this was happening, oceanographers exploring Earth’s seafloor were discovering ecosystems thriving on chemical energy from underwater volcanoes hundreds of meters below the surface. Organisms at these sites feed themselves solely using energy from Earth’s interior (from decaying U, Th, and K) rather than from the Sun. These discoveries have led scientists to believe that Europa has all the ingredients necessary to support life. If present, Europan life would be strong evidence for a chemical origin of life independent from the one that happened on Earth.

Even before Galileo finished its tour and was intentionally steered into Jupiter in 2003 to avoid contaminating Europa, scientists and engineers were studying a return mission to investigate the real possibility that life exists or could have existed at Europa. These discoveries and plans are great fodder for creative minds, and have resulted in Europa’s ocean appearing in numerous works of fiction.

Kim Stanley Robinson’s Galileo’s Dream commemorates the 400th anniversary of Galileo Galilei’s discovery of Jupiter’s moons, and imagines the famous scientist visiting the objects he discovered. The novel casts the Dutch trader who told Galileo of the telescope’s invention as a visiting Europan. Robinson uses the ambiguity between the name of the continent and the name of the moon to create a sense of mystery, with the trader saying he’s from “alta Europa”—in latin either high Europa or northern Europe.

More recently, Robinson’s 2312 envisions burgeoning interplanetary trade and culture, with emissaries from Mercury and Titan visiting a colony on Callisto and research station on Io. In that story, as in Clarke’s 2010, Europa is off limits. In 2312, humans—not a mysterious higher intelligence—have instituted the prohibition after discovering indigenous life.

Europa and the other Galilean moons now appear in comic books, TV shows, and video games. Until recently, Europa has not featured in major motion pictures, aside from its brief role in the movie 2010. Europa Report draws inspiration from recent private space exploration endeavors and scientific discoveries. It envisions a human mission searching for extraterrestrial life. The film builds on the last century of speculative fiction and scientific discovery in its presentation, portraying the human emotion that drives both exploration and hard science.

Europa Report comes out at a time when NASA scientists and engineers have compiled multiple reports of their own (available at europa.jpl.nasa.gov), detailing designs for robotic missions to investigate Europa’s habitability. The Europa Clipper mission concept, a result of those studies, is being seriously considered by NASA and the U.S. government to become the next mission of discovery to visit Jupiter’s enigmatic moon, inspiring the next generation of science fiction and fact. 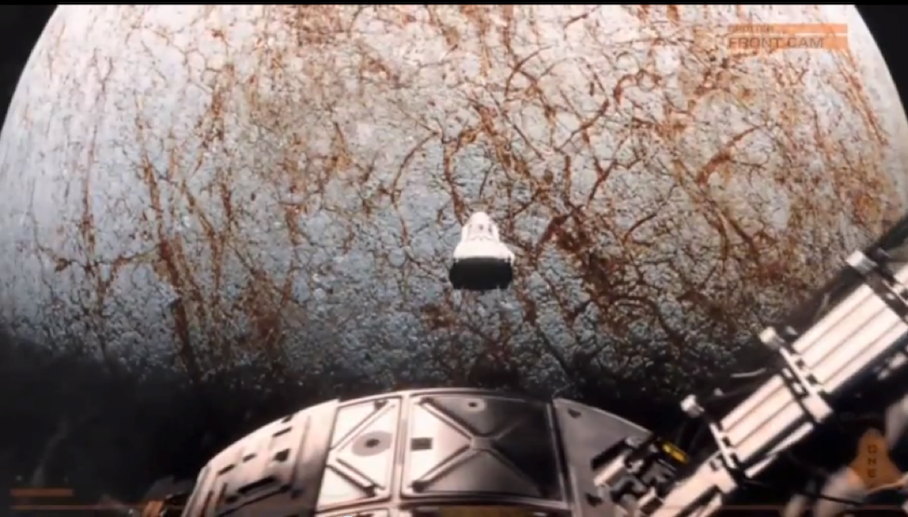 The image is highly reminiscent of pictures from the Apollo landings on the Moon that happened between 1969 and 1972.