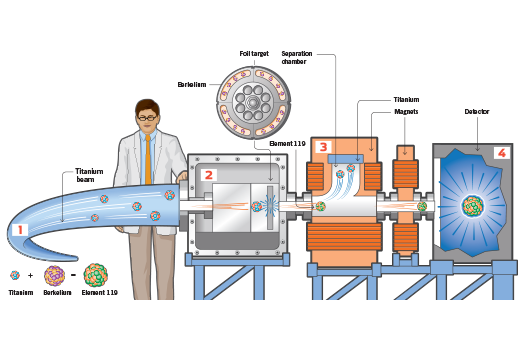 Last year, scientists in Germany set out to create the heaviest known element in the universe: element 119. For five months, they attempted to fuse the atoms of two lighter elements to form one large atom with 119 protons in its nucleus. Like other artificially created superheavy elements (those with 103 or more protons), element 119 will decay in a fraction of a second. Scientists strive to make ever-heavier elements to win acclaim (U.S. and Soviet scientists battled over their discoveries frequently during the Cold War) and to understand the processes that govern the behavior of atomic nuclei. Since wrapping up their experiment at the end of the year, the German researchers have been sifting through terabytes of data for a hint of element 119. If they find proof, the scientists will not only win the right to name it, they will do something even more unusual: add a new row to the periodic table.

A RECIPE FOR ELEMENT 119

1) Accelerate
A linear particle accelerator at the GSI Helmholtz Centre for Heavy Ion Research in Darmstadt, Germany, accelerates a beam of ionized titanium down a 400-foot tube at more than 67 million miles per hour—10 percent of the speed of light.

3) Separate
The newly formed superheavy atoms are more massive and move much more slowly—only 2 percent of the speed of light—than the ionized titanium. They also respond differently to a magnetic field. Using powerful magnets, scientists can steer element 119 away from the titanium and toward a detector.

4) Detect
Atoms of element 119 embed themselves in a silicon detector. The new element is radioactive, and while it is in the detector, it gives off alpha particles—two protons and two neutrons—in a predictable fashion. The detector registers these decays, which scientists use to prove the existence of the new element.

A BRIEF HISTORY OF HEAVY-ELEMENT DISCOVERY

1) No. 43
Technetium
Emilio Segrè made technetium, the first artificially created element, in 1937. With just 43 protons, it is the lightest element that has no stable isotope.*

2) No. 92
Uranium
More than 100 years passed from when uranium was identified, in 1789, and when French physicist Antoine Becquerel discovered its radioactive properties in 1896.

3) Nos. 93–103
Neptunium–Fermium
In 1940, Berkeley physicists made element 93, the first element heavier than uranium. It was later named neptunium. Plutonium, element 94, quickly followed. Physicists created elements 95 through 103 between 1940 and 1961.

6) Nos. 113–118
Ununtrium–Ununoctium
Between 2003 and 2011, scientists from Livermore National Laboratory and the Joint Institute for Nuclear Research in Russia collaborated to discover elements 113 through 118.

How Many Elements Are There?
Models predict that the heaviest element will have up to 126 protons. Higher than that and the atomic nucleus is too unstable to hold together. The models also suggest that an island of stability—atoms in the periodic table whose nuclei are less prone to radioactive decay—lies somewhere among the superheavies.

What’s With The Names?
The International Union of Pure and Applied Chemistry approves each element’s name. The process takes years, partly because research groups must validate the initial experimental results. While awaiting their permanent names, superheavy elements get Latin placeholders. Element 117 is called ununseptium, combining the Latin words for one, one, and seven.

*An earlier version of this article stated incorrectly that technetium was the only radioactive element lighter than uranium. We regret the error.