Scientific organizations worry that a movement to grant more rights to pets could spill over to mice and lab rats. 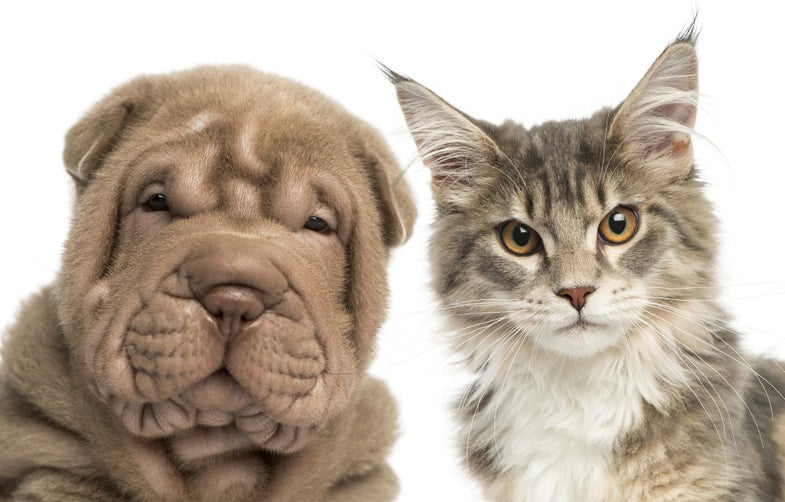 The scientific community has always had an uneasy relationship with cats and dogs. © Isselee | Dreamstime.com
SHARE

In November of 2010, 26,000 scientists descended on the San Diego Convention Center to attend the annual meeting of the Society for Neuroscience. They weren’t alone. On the first day of the conference, thirty protestors gathered outside to denounce the use of animals in research. Some were splattered with fake blood; others held pictures of kittens and monkeys with their brains exposed. The demonstration didn’t catch the meeting’s organizers by surprise: they had already prepared a counterattack.

Two days after the protest, the conference held a symposium, not-so-subtly titled “Conferring Legal Rights to Animals: Research in the Crosshairs”. The session’s panelists—two scientists, a professor of veterinary medicine, and a law professor—warned attendees about the growing movement to grant legal “personhood” to animals. Pets were a particular concern. Cats and dogs were becoming the subject of custody cases, they had begun to inherit money, and owners were starting to collect “noneconomic damages” when their animals were killed—awards sometimes in the tens of thousands of dollars typically reserved for the loss of a spouse or child. The growing legal status of dogs and cats, the panelists warned, could spill over to mice and lab rats, potentially dooming biomedical research.

The scientific community has always had an uneasy relationship with cats and dogs. Things didn’t get off to a good start in the seventeenth century, when famed French philosopher Rene Descartes declared that all animals were soulless machines, devoid of thought or feeling. His writings helped justify vivisection, which was gaining popularity as doctors strove to understand how the body worked. Descartes himself was no stranger to the practice. “If you cut off the end of the heart of a living dog,” he wrote, “and through the incision put your finger into one of the concavities, you will clearly feel that every time the heart shortens, it presses your finger, and it stops every time it lengthens.”

Descartes and his successors did have their detractors. In the 1870s, the Royal Society for the Prevention of Cruelty to Animals (RSPCA)—the world’s first animal welfare organization—pushed for an anti-vivisection law in England. Parliament appointed a royal commission to evaluate the legislation, and one of the commission’s members—a journalist named Richard Holt Hutton—argued vehemently that cats and dogs should be kept out of the laboratory. “No class of animals… contains so many creatures of high intelligence, and therefore probably of high sensibility, as dogs and cats,” he wrote. “The humble friends of man, which have been taught to obey and trust him, should not be selected as the victims.”

Despite the RSPCA’s efforts, vivisection continued, and cats and dogs became ever more popular research subjects, especially with the rapid growth of the scientific enterprise that followed World War II. Long before companies began mass breeding mice, rats, and other creatures for research, dogs and cats were the guinea pigs of choice. At first, the public didn’t bat an eye—even when, beginning in 1948, the biomedical research lobby helped push through legislation in several states that required animal shelters to surrender their unclaimed cats and dogs to hospitals, universities, and pharmaceutical companies. But when thieves known as bunchers began stealing pets from people’s homes, and Americans began to get wind of animal dealers who chained up and caged dogs and cats in horrendous conditions as they waited to be sold for biomedical research (a 1966 Life magazine exposé about an especially notorious Maryland animal dealer was entitled “Concentration Camps for Dogs”), the public put its foot down. It flooded Congress with tens of thousands of letters, eclipsing the number received on Vietnam and civil rights issues combined.

The recently-formed Humane Society of the United States (HSUS) used this ammunition to help pass the Laboratory Animal Welfare Act in 1966, the tightest regulations on animal research in U.S. history. The federal law cracked down on animal dealers and mandated the humane treatment of laboratory animals. The scientific community began fighting back with its own lobbying groups, most prominently the National Association for Biomedical Research (NABR), which since 1985 has advocated for the continued use of lab animals. Today, the number of cats and dogs in U.S. research labs has shrunk dramatically, thanks to changing social attitudes and the rise of cheaper animal models like mice and fruit flies. But the specter of pets still looms large over scientific research.

The San Diego symposium was the culmination of years of anxiety over the evolving legal status of cats and dogs. Research organizations had been keeping a wary eye on the proliferation of noneconomic damage awards, pet custody cases, felony anticruelty laws, and the success of the “Guardian Campaign”, an animal rights endeavor that had convinced more than a dozen U.S. cities and the state of Rhode Island to begin referring to owners as “guardians” in their pet-related ordinances. In 2004, NABR created an “Animal Law Section” on its website to track these issues. Though the organization’s primary concern is attacks against the use of rodents and nonhuman primates, it frets that enhanced rights for cats and dogs—especially a sort-of legal personhood that would allow them to be treated more like people in the eyes of the law—could bleed over to lab animals. “We’re worried about the slippery slope,” says NABR’s president, Frankie Trull. “Once you assign rights to animals, you can’t do animal research without it being challenged on every level. There’s not a single disease that’s studied that is not studied first in animals.” Important work on Alzheimer’s, birth defects, cancers—“all of it,” she says, “would come to a screeching halt.”

As Americans have embraced pets as virtual children, they’ve soured on animal research. Trull’s concerns are well-founded. As Americans have embraced pets as virtual children (more than 90% consider their cats and dogs members of the family), they’ve soured on animal research. In 2001, only 29% of the public deemed animal testing “morally wrong”; by 2013, it was 41%, and 54% of those aged 18 to 29. It’s a trend that’s likely to continue. The generation growing up today is more likely than ever to view its cats and dogs not just as family members, but as virtual siblings. When these kids become adults, they’ll be even more prone than their predecessors to view the thoughts and feelings of other animals through the eyes of their pets.

Meanwhile, organizations born out of a concern for the welfare of cats and dogs are now looking for ways to protect lab animals. Both HSUS and the Animal Legal Defense Fund (ALDF), a northern California group of lawyers that has advocated for more rights for animals in the courtroom, have pushed hard to end animal research. HSUS has carried out undercover investigations of scientific labs and lobbied to end invasive research on chimpanzees. ALDF has filed a landmark lawsuit against a California biotechnology company for failing to properly care for its animals, and it’s petitioning Congress for an Animal Bill of Rights, which includes “the right of laboratory animals not to be used in cruel or unnecessary experiments.”

Researchers haven’t taken such campaigns lying down. Thanks to heavy lobbying, most state anticruelty laws exempt lab animals. And in 2006, NABR helped pass the Animal Enterprise Terrorism Act. The law, which imposes penalties of up to decades in prison and hundreds of thousands of dollars in fines for individuals who interfere with biomedical research, is mainly aimed at animal rights protestors who destroy property and threaten lives. But opponents say it demonizes anyone who questions the use of animals in research.

A few influential legal scholars have even joined the fray. Perhaps no criticism is more damning than that coming from Richard Cupp, a law professor at Pepperdine University in Malibu, California. Cupp, a panelist on the “Research in the Crosshairs” session at the San Diego conference who has advised NABR, is a hugely influential force in the antipersonhood movement. He has written that equating animals with people devalues humanity. “When we allow animals into our inner circle, we erode the notion that humans are unique,” he says. “When animals are on the same plane as humans, we no longer have the moral responsibility to care for them. And when humans are on par with animals, what’s to stop us from euthanizing humans?” Legal rights, he says, are a serious business. They don’t just give us the ability to live our lives relatively unencumbered. They enter us into a contract with every other member of society, a world built on the give-and-take between human rights and human responsibilities. As he wrote in a landmark 2007 law review article, “A powerful argument may be made that granting rights to animals that do not possess moral responsibility represents a rejection of the foundation of human civilization.”

NABR’s Trull laments the battles over animal research. “It’s much more combative than it used to be,” she says. And things are only likely to get worse, especially if the legal status of pets continues to rise. “I’m a crazy cat person,” she says. “I adore my animals.” But personhood is off the table. Any attempts to assign more rights to animals, even dogs and cats, will be met with fierce opposition. “We’re going to fight this with every bit of resource we have.”

David Grimm is the online news editor of Science, and the author of the new book, Citizen Canine: Our Evolving Relationship with Cats and Dogs, from which this article is adapted. Excerpted with permission from PublicAffairs, a member of the Perseus Books Group. Copyright 2014.