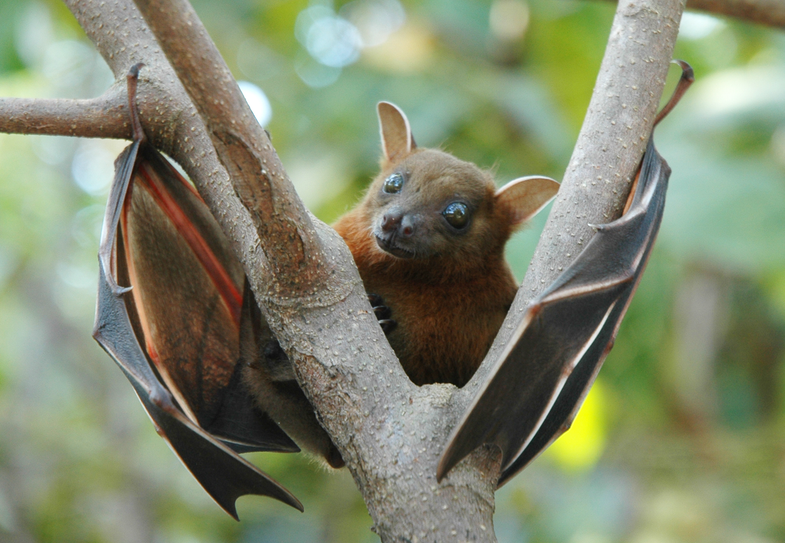 Seagull drones, RoboBees, and human-powered aircraft — all these flying machines borrow heavily from nature’s designs. But building animal-inspired robots requires understanding how the animals work, at least on a basic level. Humans may never build something as complex as a bat, but we can build a simplified version that borrows a bat’s key tricks. Danesh Tafti and colleagues at Virginia Tech are doing the hard work of making this job a little easier.

Bat wings are actually arms and hands covered with a stretchy, sensitive membrane. By literally lifting a finger, bats can make minute course corrections in mid-air. But it’s difficult to tease out how they do this. You have to stick a lot of sensors on a bat and let it fly, measuring aerodynamic forces. Then computer simulations must crunch these readings to model the fluid dynamics of flight.

Tafti’s team recently did the latter, using recorded measurements completed by a Brown University group. They modeled the flow field that a bat’s wing produces, something that is very difficult to measure in experiments — imagine watching a bat flap around in a wind tunnel, and trying to make sense of the physics.

“This thing is moving all over the place, so to get a quantitative assessment of what the flow field looks like is extremely difficult,” Tafti says. “It can manipulate its fingers individually — stretch them, relax them, do all sorts of stuff which birds really can’t do. Bats are unique in the number of degrees of freedom they have in manipulating their wings, so it’s a very complex motion.”

You need two things to fly: Lift, which is the force that keeps you airborne, and thrust, which keeps you moving forward (often for the purpose of generating lift). Birds, bats and insects do it by flapping their wings and gliding. Humans do it by pushing or pulling a fixed airfoil very fast through the air, essentially creating a pressure gradient that pulls the airfoil up. (An airfoil is the wing of an airplane.)

Lift and thrust are both complex forces, especially for a very complex wing like a bat’s. You have to measure how they act on the whole wing. Tafti and his team looked at measurements taken from a lesser short-nosed fruit bat while it was flying in a straight line at a roughly 21-degree angle. It was climbing, so it was generating greater lift, Tafti says.

They noticed that the wing deforms in several ways as it moves through the air. The bat changes its wings’ surface area and torsion, making little tweaks to its fingers. This illustration shows all the intricate ways the wing morphs during flight: 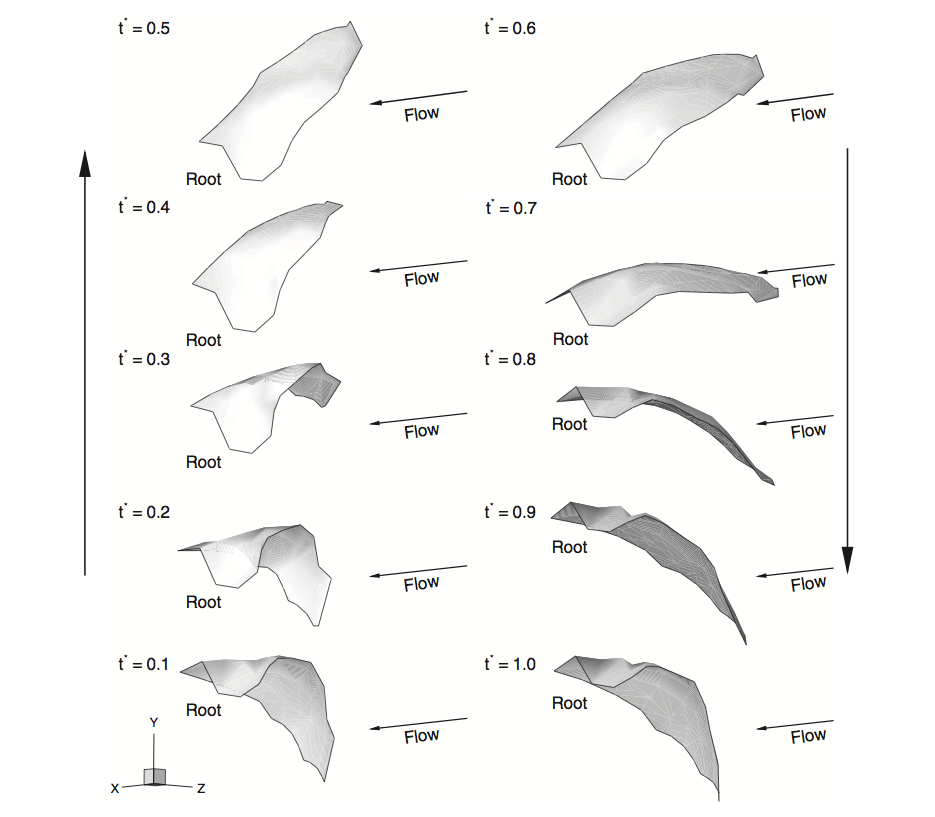 In this particular motion, the bat is trying to gain altitude, so it’s not the most efficient flight configuration. The bat’s propulsive efficiency (as opposed to other kinds of biological efficiency) is only about 8 percent, Tafti says. But that’s OK because of what it’s doing. It’s akin to a jetliner using maximum power to take off, and leveling out when it reaches cruising altitude. “A lot of the power it is expending is going toward increasing its lift, and not thrust,” Tafti says.

All this helps explain how the complex, twisty motions of a bat hand-wing generate both lift and thrust. The next step is to break up this particular bat’s experimental flight into individual, tiny motions, to see which small wing flexes or certain shapes are the most energetic.

“Bats are extremely agile; they do all sorts of crazy stuff mid-air. It changes trajectory, it turns, it dives,” Tafti says. “What we would like to do is study a lot of these different types of wing motions and try to extract certain commonalities between different maneuvers.”

The end goal: A simplified bat-flight model, which engineers could use to make a robobat that flies like a real one. “You can call them the essential pieces of the full bat-motion,” Tafti says. “We are trying to separate the meat from the bones.”