A thriving colony of millions sheds new light on the mysterious polar creature. 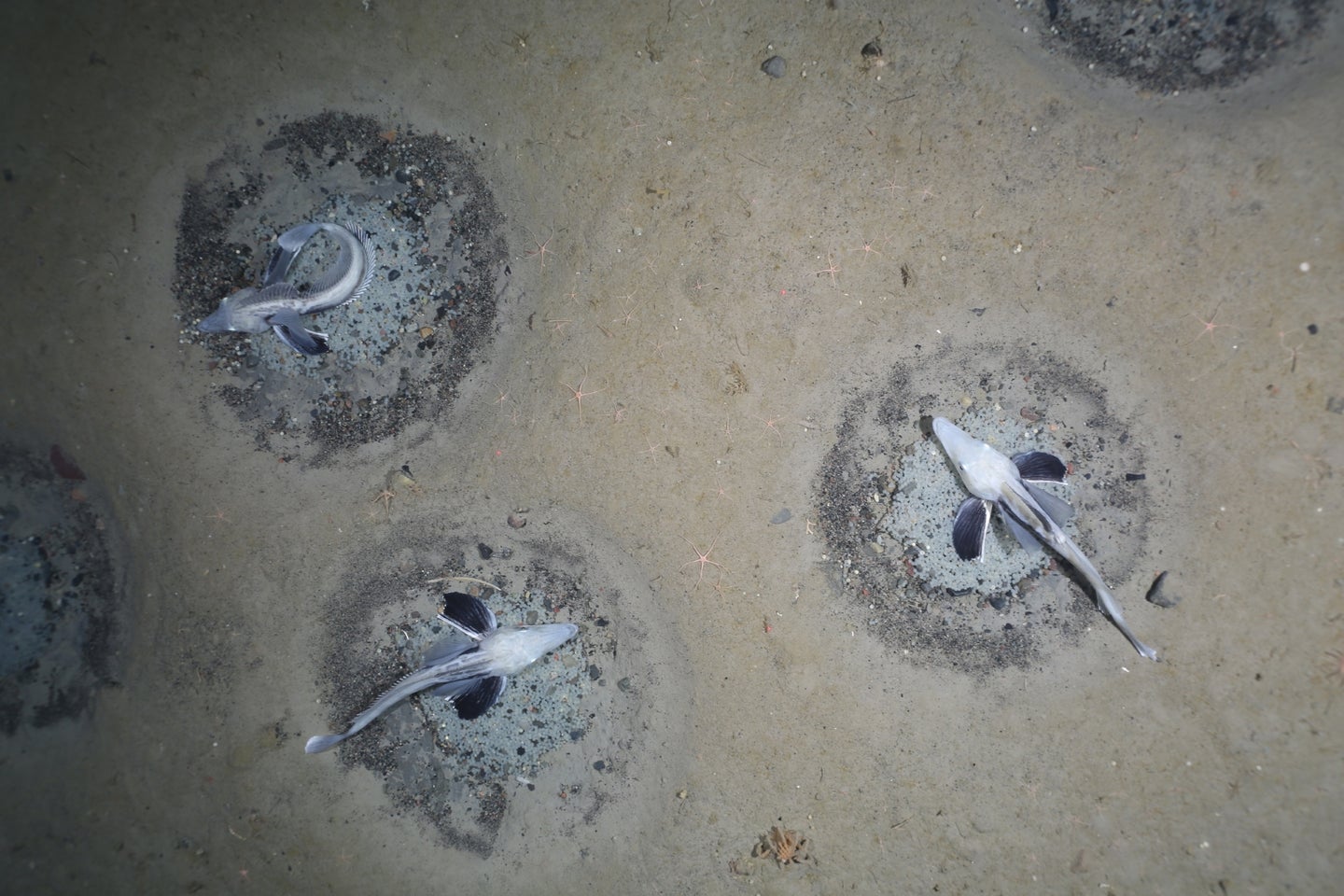 Oftentimes, the most astounding scientific discoveries are made entirely by accident. It was 3 am one sunshine-filled night in February of 2021, and marine biologist Lilian Boehringer of the Alfred Wegener Institute in Germany was keeping vigil in the camera room aboard the research vessel Polarstern, watching live images of the Antarctic seafloor roll fire off every 20 seconds. More than thousands of feet beneath the floes, Boehringer saw something in the barren landscape: teeming icefish nests ringed with stones. The structures continued non stop for four hours as the camera drifted along.

“They were everywhere,” Boehringer told The New York Times in an interview.

Boehringer’s team was in the Weddell Sea to study ocean currents and carbon cycles. Instead, the researchers stumbled upon the largest fish nursery on record. Previously, the biggest colony in the books was only 60 nests strong, The Guardian reports. But this new nesting site blows the last record out of the water, with 60 million active nests sprawling  across an area about twice the size of San Francisco. “I’d never seen anything like it in 15 years of being an ocean scientist,” deep-sea biologist Autun Purser of the Alfred Wegener Institute told CNN. Purser also witnessed the spectacular camera feed when he joined Boehringer later on that February night. “After that dive, we emailed the experts on shore who know about fish like this. They said, yep, this is pretty unique.”

Something fishy about icefish

Before the discovery of nests galore, the icefish itself had long piqued scientific interests when an individual was first caught by a Norwegian zoologist a century ago. Researchers were quick to notice the Channichthyidae family’s  physiological marvels. As The New York Times explains, its story starts 30 million years back in time when the once balmy Antarctic seas froze and became inhospitable to many of its original inhabitants. But one bottom dweller survived and adapted to thrive in these frigid waters. Its descendants dropped their scales, swapped in a clear version of blood, and thinned down their bones to the point that some organs can be seen through the translucent skeletal cages.

This modern and revamped icefish shed many of the features that we know of from fish, simply because they were unnecessary—dangerous even—for its lifestyle. Cold water contains more dissolved gases than warm water, so the lack of scales allows the icefish to absorb oxygen from the ocean  directly through its skin. What icefish blood lacks in hemoglobin—the molecule that ferries oxygen through the body and gives blood cells their signature crimson hue—is made up for in antifreeze proteins, which halt the growth of ice crystals in the creature’s veins. Over the eons, the species gradually built up and developed floppier bones for buoyancy. It started riding on ocean upwellings to feed on krill and zooplankton, casting off part of its bottom-dweller status.

Beneath the Weddell Sea where the Polarstern floated, the water is a toasty two degrees Celsius warmer than the surrounding seabed. That might explain why icefish flock to these churning waters—the currents probably favor their foraging habits—to establish the world’s largest known nesting site.

A bonanza of nests

“Some animals like to be social, but there’s a limit,” John Postlethwait, a biologist at the University of Oregon who wasn’t involved in this fateful expedition, told CNN. This new throng of icefish nests defies that expected limit, and scientists don’t know why. “Congregating may give them advantages for finding mates, but provides a rich point source for predation,” he added.

The nests discovered by the researchers aboard the Polarstern, recently detailed in Current Biology, provide a glimpse into the breeding habits of the creatures. Each had an average of 1,735 eggs, the New York Times reports. In about the three-fourths of the nests, a single icefish stood guard to protect the eggs from potential predators like starfish, polychaete worms, and sea spiders. Above the breeding grounds, hungry Weddell seals also frolicked. Present and historical satellite tracking data from the seals revealed that these hunters would dive down to the nesting site to snack on icefish. Bony carcasses littering the crime scene offered further evidence of the breeding colony’s importance in the local food web, Live Science explains.

While people don’t typically eat icefish, the survival of these enigmatic creatures is threatened by humankind just the same. As the planet heats up, the ice cover shielding the nests may disappear, exposing the vulnerable younglings to predators, according to Gizmodo. Algal patterns might shift, which could further affect the distribution of food sources that support the vast community of icefish.

That would make this unusually large community of icefish particularly vulnerable. Their highly localized nests mean the colony has put all their eggs in one basket, Science News explains: Any shocks in the surrounding environment has the potential to wipe out the entire population. Per the New York Times, the authors say that their study provides more than enough reason to establish a marine protected area in the Weddell Sea, similar to the environmental protections placed on the Ross Sea which bans commercial fishing in its waters. In the meantime, the team has stationed a camera sentinel to photograph the colony twice a day for two years, and laid plans for returning to the region for follow-up studies.