Natural antifreeze is better for wildlife—and our mechanic bills. 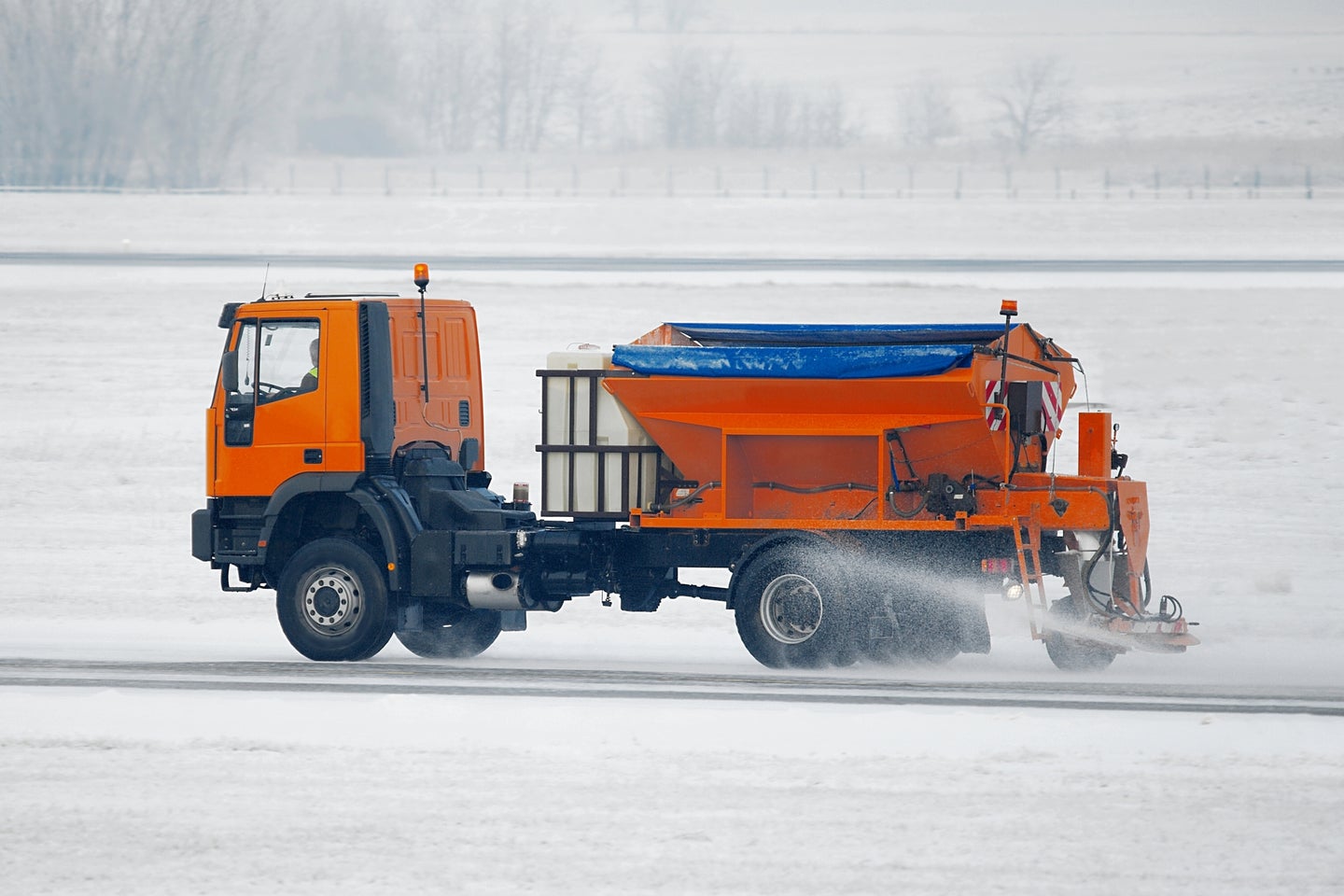 Rock salt is great at getting the de-icing job done, but it can take a toll on water systems and aquatic life. Gudella/Deposit Photos
SHARE

Monika Bleszynski is a research scientist and adjunct professor at the University of Denver. This story originally featured on The Conversation.

Many people associate a fresh snowfall with pleasures like hot chocolate and winter sports. But for city dwellers, it can also mean caked-on salt that sticks to shoes, clothing hems, and cars. That’s because as soon as the mercury dips below freezing and precipitation is in the forecast, local governments start spreading de-icing salts to keep roads from freezing over.

These salts are typically a less-refined form of table salt, or sodium chloride, but can also include other compounds, such as magnesium chloride and potassium chloride. They work by lowering the freezing point of water.

De-icing salts also do extensive damage to autos, infrastructure, and the environment. And cities use them in enormous quantities—nearly 20 million tons per year in the US Snowbelt cities in Canada, Europe and Japan also use de-icing salts heavily.

But new options are in the works. I am a materials scientist seeking solutions for our overly salted sidewalks by analyzing ways in which the natural world deals with ice. Fish, insects, and even some plants have learned to adapt to cold climates over hundreds of thousands of years by making their own antifreeze agents to survive subfreezing temperatures. By taking a page from nature, my colleagues and I hope to develop effective but more benign antifreeze compounds.

As many drivers know too well, road salt reduces cars’ lives by speeding up the rusting process. A 2010 study estimated that the use of de-icing salts costs US drivers $23.4 billion dollars nationwide yearly in vehicle damage due to corrosion.

Road salts also damage the surfaces we drive on. They contain chlorine ions—atoms with a negative charge—that alter the chemistry of water and make it more corrosive when it comes in contact with materials like concrete and steel.

As a result, road salts increase existing strains on aging structures. De-icing salts have contributed to bridge failures and cause cracking and other forms of weathering in highway surfaces.

De-icing salts have widespread effects in nature, too. If you drive along a forested road after a long snowy winter, you may notice that trees next to the road look a little more brown than the others. That’s because road salts displace minerals in soil and groundwater, creating a condition known as physiological drought.

This means that trees cannot take up water through their roots even if it is freely available in the soil. When natural drought conditions already exist, in such places as Colorado, physiological drought can increase the risk of wildfires by making plants more prone to ignition.

Streams, rivers, and lakes are especially vulnerable to water runoff that contains de-icing salts. Chlorine from the salt can inhibit fish from spawning and reduce dissolved oxygen levels in the water, which harms fish and other aquatic life. Salt-laden runoff can also promote the growth of dangerous cyanobacteria, also known as blue-green algae. Some forms of blue-green algae produce toxins that can sicken humans or animals that consume them in drinking water.

An alternative de-icing option should be nontoxic and break down into benign components—but not too quickly, or its effects won’t last. To see why this is important, consider propyplene glycol, which is used to de-ice aircraft.

Propylene glycol is preferred for this purpose because it is less toxic than the ethylene glycol that keeps your car radiator from freezing up. But propylene glycol’s effects are short-lived, so aircraft typically can wait for only a limited period between de-icing and takeoff. This is also why propylene glycol is rarely sprayed on roadways and surfaces. Furthermore, although it is generally classified as safe for humans, it can still be deadly for aquatic life.

What about natural alternatives? Scientists have found insects and spiders in Alaska that create antifreeze proteins in their bodies that lower the freezing point of water by a few degrees. And some fish, like the Antarctic toothfish (Dissostichus mawsoni), create antifreeze glycoproteins that prevent the blood in their veins from freezing in the coldest waters on Earth.

Most of these glycoproteins are delicate structures that break down quickly in the harsh outside world. But my colleagues and I are learning how to make our own antifreeze compounds through imitation. Our first challenge is to learn how the natural versions work so we can re-create them.

While there’s still much we don’t understand, we are using advanced computer modeling to see how antifreeze proteins interact with water molecules. Other scientists have discovered that fish antifreeze glycoproteins contain two main segments, and that certain sections are more essential than others.

Specifically, small compounds called hydroxyl groups, which consist of hydrogen and oxygen atoms, do most of the work. These small compounds lock into place with water molecules, like a key in a lock, to prevent ice from forming. They are also part of most critical sections of the proteins that bind to the surface of any developing ice crystals and prevent them from getting bigger.

Antifreeze proteins are natural polymers—enormous long molecules consisting of smaller repeating molecules, like links in a chain. Re-creating these compounds is no easy task, but we can create our own synthetic versions in a lab, starting with polyvinyl alcohol, or PVA. This is a simple, inexpensive compound that is nontoxic to humans and aquatic life and is a common ingredient in many everyday personal care products.

PVA contains the same hydroxyl groups as those found in fish antifreeze proteins. Using a bit of chemical engineering, we can change where those hydroxyls are located in the polymer structure, making it more like the compounds that fish produce. In the future, we may be able to change PVA from an everyday compound into an ice-fighting substance that can be used just about anywhere.

Because PVA doesn’t degrade too quickly, it has the potential to work on surfaces that need to stay ice-free, such as roads, sidewalks, and handrails. Its long chemical structure makes it suitable for shaping and adapting into sprays or coatings. Someday cities may rely in winter on nontoxic spray-on antifreezes that won’t stain your clothes or corrode your car.