Today In Important Science: Cats Are Particular About What They Pee On

The European wildcat has a favorite place to pee, just like George Costanza. 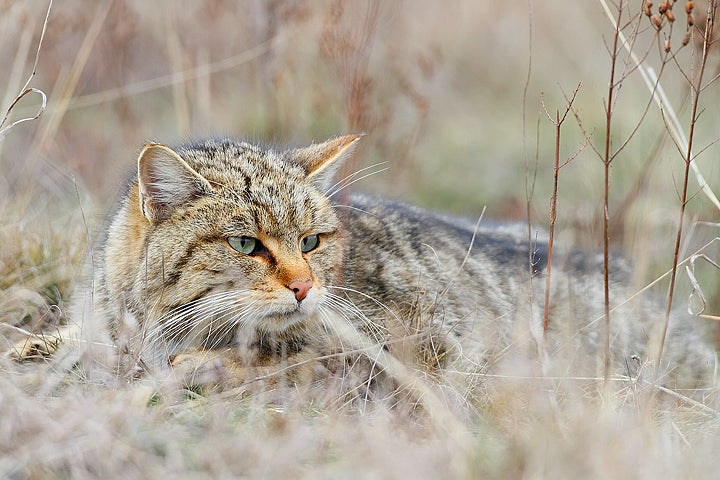 Cats, and many other mammals, like to pee on things. It’s called “urine marking,” and acts as a form of communication through scent (and, to a lesser extent, a visual signal). A new, very important study in the Journal of Zoology found that the way cats–specifically, the European wildcat–mark is intentional and particular.

Felis silvestris the European wildcat, looks like a slightly larger and stockier version of a housecat. (Its taxonomical separation from the housecat is complicated by the fact that wildcats and housecats interbreed often.) Wildcats are highly territorial, and mark their territory by urinating and leaving strategic poops all around their areas. “When urine spraying, a wildcat raises up its tail and ejects backwards a spray of urine against a prominent object of its surrounding environment,” says the new study.

But as it turns out, wildcats look for specific kinds of trees and plants to mark, based on how well those plants natural characteristics will spread the scent of the mark. It was assumed that cats merely mark large objects–marking the biggest tree or biggest rock, for example–but that’s not the case. European wildcats favor the juniper tree, not choosing it for its size but selecting it over larger, nearby non-juniper trees. The juniper is a highly aromatic and oily tree (it’s a major component in the flavoring of gin, for example) and the cat chooses the juniper because, the study suggests, its natural oils will mesh with the cat’s scent to make the mark more powerful than the mark is alone. The study says that therefore, wildcats “select those plants which could enhance the olfactory effectiveness of the mark.” It’s not totally clear how, chemically, scent marks interact with the volatile organic compounds in the juniper, but it is clear that the cats choose those more than other plants.