FYI: Can humans get high on catnip?

Related: Can cats get high on marijuana? 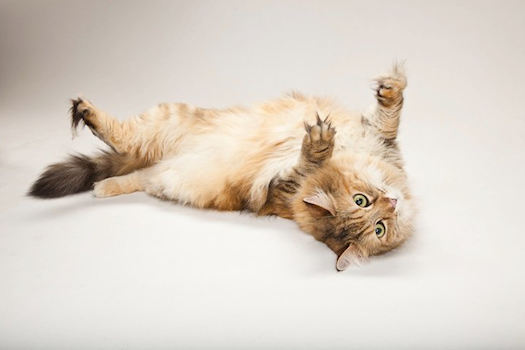 While cats may feel effects from marijuana—no word on whether Sir Harry Paus actually likes the experience—”kitty pot” does not have a reciprocal effect on humans.

In the late 1960s, some researchers reported catnip gave people a marijuana-like high, but it turned out they had simply mixed up the two plants. As veterinarian Arnold Plotnick of Manhattan Cat Specialists in New York wrote to me in an email, “Think about it… catnip is cheap and legal. If it had a significant effect on people, everyone would be smoking it.”

Meanwhile, cats do feel effects from marijuana, but it may be scary for them. “Animals can’t understand they’re being intoxicated, therefore it can cause considerable anxiety,” says Bruce Kornreich, associate director of the Cornell Feline Health Center in upstate New York.

It’s not clear why the active chemical in catnip, nepetalactone, doesn’t affect humans, Kornreich says. Pot affects cats because like many mammals, including humans and dogs, cats have receptors in their brains for pot’s active chemicals, cannabinoids. Cannabinoid receptors make pets susceptible to feeling symptoms when they inhale secondhand smoke or, more commonly, accidentally eat their owners’ stashes. (It’s actually a bigger problem with dogs, he says, because dogs eat everything.)

Kornreich has seen pets come into veterinary emergency rooms after marijuana exposure. “The pets are presented for anxiety, active heart rate, acting a little unusual,” he says. “They may react differently to sound and to being touched” perhaps because, like humans, drugs alter their perception.

Kornreich urges pet owners to take their pets to a vet if this happens, adding that vets are not required by law to report marijuana they run into during their practice. Most veterinarians care more about making pets better, he says. “It’s more just focused on the well-being of the patient.”

He also strongly discourages purposefully exposing a pet to marijuana. Fido and Kitty can’t consent to getting high. “I don’t think it’s right or fair to make that decision for an animal,” he says.

If pot affects cats because they have cannabinoid receptors, does that mean people aren’t affected by catnip because they don’t have nepetalactone receptors? Scientists aren’t sure. “While it seems that this is a reasonable hypothesis to explain why humans don’t respond to catnip like cats do, I cannot find any studies that rigorously test it,” Kornreich says. While many brain receptors are common across different animals, many receptors also differ, so it wouldn’t be unprecedented for humans to lack a receptor present in cat brains.

In cats, inhaled nepetalactone stimulates the olfactory bulb, the part of the brain that processes odors. The olfactory bulb then interacts with the amygdala, the brain region associated with emotion and decision-making, and hypothalamus, which controls a variety of bodily functions. From the hypothalamus, nepetalactone stimulates a sexual response in cats that are genetically predisposed to sensitivity to catnip. (About 20 to 30 percent of cats don’t seem to react to the plant.)

Some insects seem to react to nepetalactone, too. Strangely enough, chemical companies are studying nepetalactone because it seems to repel mosquitoes, ticks and mites, like a kind of natural DEET. For the insects to change their behavior around nepetalactone, even if negatively, suggests that they have nepetalactone receptors.

As for smoking catnip: not only does it fail to get people high, it can make them feel pretty awful. Too much catnip, whether smoked or drunk as a tea, could cause headaches and vomiting.