On Average, Every Star Has At Least One Planet, New Analysis Shows

What are the implications for the search for extraterrestrial life? PopSci asks the experts 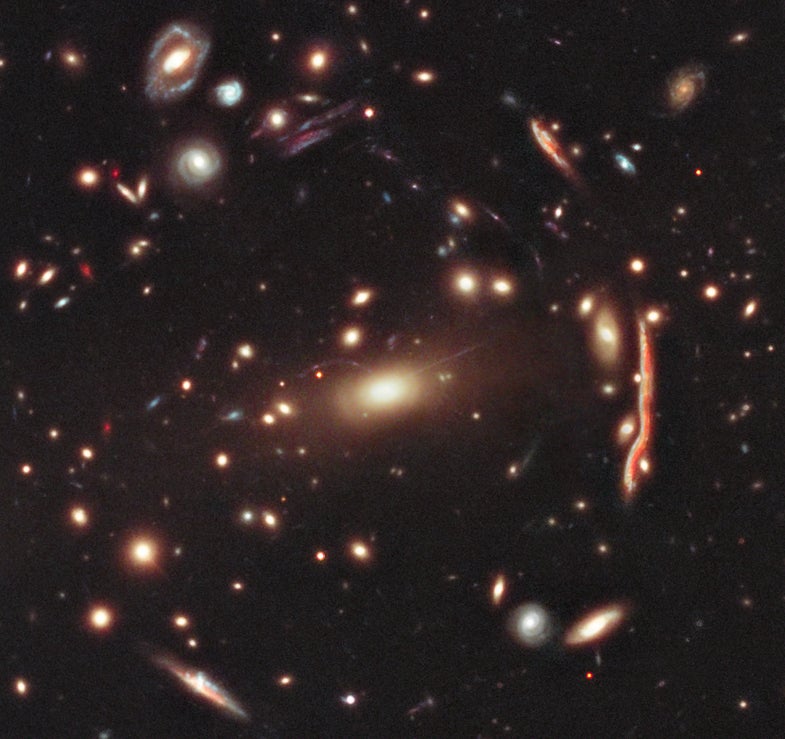 Each star in the Milky Way shines its light upon at least one companion planet, according to a new analysis that suddenly renders exoplanets commonplace, the rule rather than the exception. This means there are billions of worlds just in our corner of the cosmos. This is a major shift from just a few years ago, when many scientists thought planets were tricky to make, and therefore special things. Now we know they’re more common than stars themselves.

“Planets are like bunnies; you don’t just get one, you get a bunch,” said Seth Shostak, a senior astronomer at the SETI Institute who was not involved in this research.

“So really, the number of planets in the Milky Way is probably like five or 10 times the number of stars. That’s something like a trillion planets.”

Of course there’s no way to know, at least not yet, how many of these worlds could be hospitable to forms of life as we know it. But the odds alone are tantalizing, Shostak said.

“It’s not unreasonable at this point to say there are literally billions of habitable worlds in our galaxy, probably as a lower limit,” he said. “Maybe they’re all sterile as an autoclave, but it doesn’t seem very likely, does it? That would make us very odd.”

Other astronomers maintain that we are odd indeed, and that increasing the known planet population does not increase the odds of finding intelligent life on any of them.

“The numbers are huge by any human standard, but we are still looking at only a tiny bit of our galaxy,” said John Gribbin, an astronomer and science writer who just published a book called “Alone in the Universe.” “[This research] does further our understanding of how things like planets form and how stars form, but there is a long way to go before we can say there is life on any of these planets, and further to go before we get to civilization.”

The new planetary plenitude is derived from a six-year survey of millions of stars studied with an international network of southern hemisphere telescopes. Astronomers used a delicate detection method called gravitational microlensing, which is one of three trusty ways to find extrasolar planets. Kepler uses the transit method, detecting blips in star brightness as planets cross in front of them. Other observatories use the radial velocity method, measuring the wobble caused by the gravitational tug of a planet on its star. Both of these are helpful for finding planets that are either huge or hug tightly to their stars. But the gravitational microlensing method can be used to find planets over a wider mass range and a wider orbital distance. 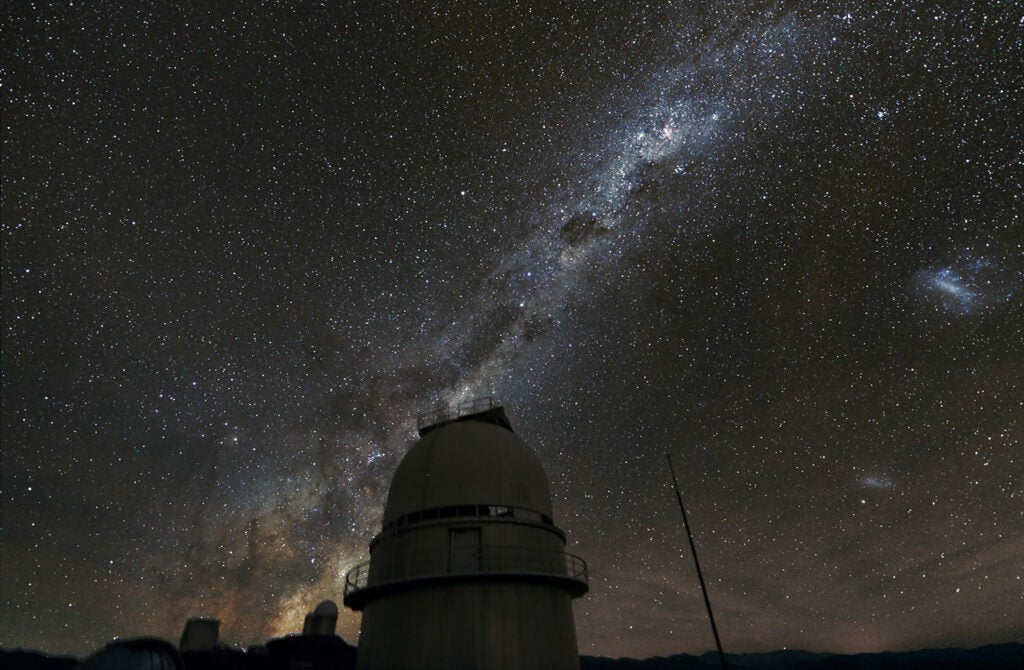 It works by using the host star and its putative planets as a lens. The gravitational field of the host solar system magnifies the light of a star in the background. If the host star does have a planet, the planet essentially widens the lens, and this is an effect that can be measured. Such an alignment is incredibly rare, so an international team of researchers examined 100 million stars every night and noted ones with promising light curve amplifications, examining them in higher resolution. From 2002 to 2007, the team observed 500 such stars. In 10 cases, they could directly see the lensing effect of a planet. A statistical analysis showed one in six of the stars studied hosts a planet of similar mass to Jupiter, half have Neptune-mass planets and two thirds have super-Earths. Combining the results suggests that the average number of planets around a star is greater than one, the astronomers say in a new Nature paper.

“Together, the three methods are, for the first time, able to say something about how common our own solar system is, as well as how many stars appear to have Earth-size planets in the orbital area where liquid what could in principle exist as lakes, rivers and oceans — that is to say, where life as we know it from Earth could exist,” said Uffe Gråe Jørgensen, head of the Astrophysics and Planetary Science group at the Niels Bohr Institute at the University of Copenhagen and an author of the paper.

With so many planets, it could be easy to assume the odds have just gotten much better for alien life hunters, but it’s not necessarily the case because scientists still don’t know what’s necessary for life to form, said Paul Davies, a cosmologist and astrobiologist at Arizona State University.

“How much real estate is out there doesn’t matter,” he said. “My guess is there would be some hundreds of millions of Earth-like planets in the Milky Way, but that is no good to you if the probability of life forming on one of them is one in a trillion.”

The lack of knowledge hasn’t stopped scientists from making educated guesses, however — take the Drake equation, devised by astronomer Frank Drake in 1961, which seeks to estimate the number of intelligent civilizations based on an equation of assumptions.

“All of the work that has been done since 1961 when this equation was concocted has gone in the same direction, namely, that our situation here is not so weird, not so strange, not so bizarre, not so special,” Shostak said. “We’re not unique, at least astronomically.”

We’re just one in millions. 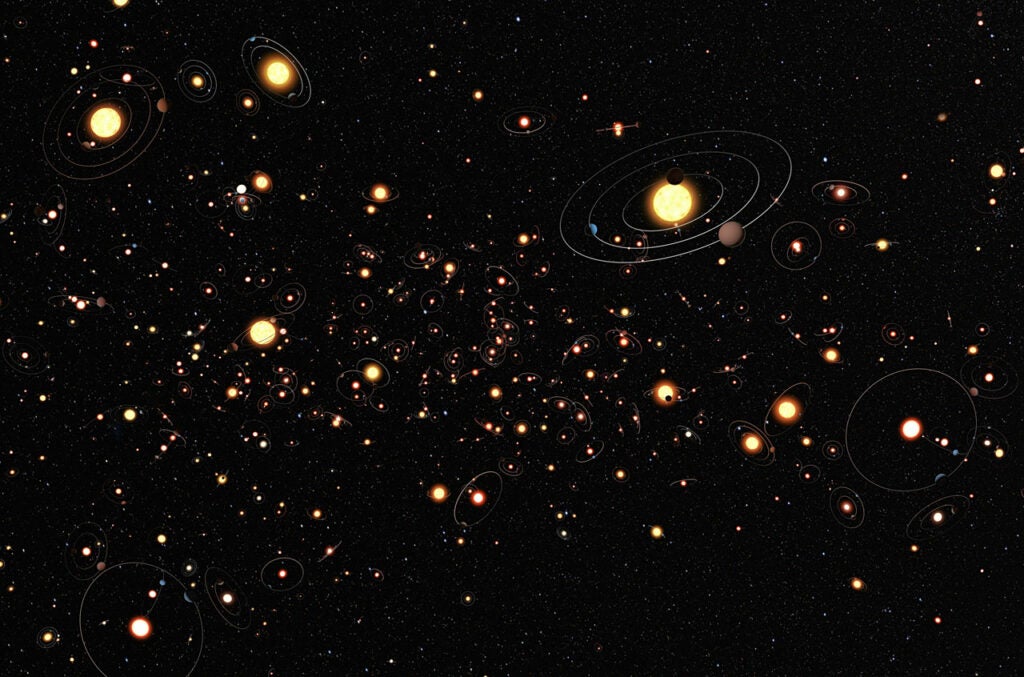 A Plethora of Planets

This artist’s impression shows how common planets are around the stars in the Milky Way. The planets, their orbits and their host stars are all vastly magnified compared to their real separations. A six-year search that surveyed millions of stars using a technique called microlensing concluded that every star has at least one planet orbiting around it.
distant solar systems
european southern observatory
exoplanets
feature
gravitational fields