One man’s noise is another man’s long-sought signal 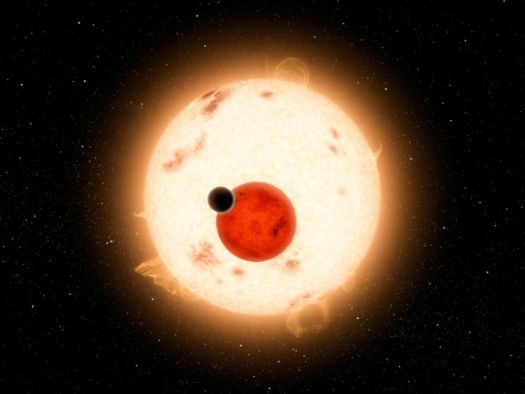 In the pantheon of modern astronomical explorers, the Kepler Space Telescope ranks right near the top, uncovering more than 1,200 worlds outside our solar system while staring at just a small fraction of the sky. Kepler has unveiled searingly hot, tiny terrestrial worlds, planets potentially sharing an orbit, an especially inky light-absorbing planet, and 54 planets comfortably ensconced in the Goldilocks zones of their stars. In September, Kepler astronomers announced yet another bizarre discovery: A planet orbiting around a binary star system, just like a certain dun-colored world in a certain science fiction film sextet.

But most people likely didn’t know this exciting find — doubtless one of Kepler’s most famous discoveries to date — was initially someone else’s trash. Laurance Doyle happily sifted through it, leading to one of the biggest scientific discoveries of the year.

Kepler-16b, as the circumbinary world is called, was discovered after painstaking review of eclipsing binary star systems, Doyle tells PopSci in an extensive interview. To most planet-hunters, who seek blips in star brightness to detect the telltale sign of a transiting planet, these binaries fog up the data.

“The single-star transit hunters would call eclipsing binaries the bane of planet-hunting,” Doyle said. “But what’s one persons bane is someone else’s treasure. We said ‘Give us your poor, your tired, your eclipsing binaries.’ They threw them out, and we took them.”

PopSci talked to Doyle, an astrophysicist at the SETI Institute, to find out how he and his colleagues did it.

PopSci: Why is there so much data from Kepler, if it’s only looking at one tiny slice of the sky?

Laurance Doyle: Kepler is a wide-angle version of the Hubble Space Telescope. Hubble is like using binoculars for studying elk on a far ridge, and you note that they have horns and antlers. Kepler is more like doing a survey of elk. You count the elk on the far hill, instead of studying the antlers or hooves on one of them. The primary goal of Hubble was to determine the age of the universe, and the primary goal of Kepler is to find another Earth, so it’s looking at a huge amount of data. Fifteen million stars hit the Kepler telescope, and due to limitations of basically memory, which are basically due to funding, we can only download the brightest 155,000. If you’re going fishing, it takes time. So Kepler has looked continuously at 155,000 stars for going on three years now. That’s kind of a lot of data. And in addition, you’re looking at data that is 100 times more sensitive than has ever been done for stars before. We’re looking at light curves. Kepler doesn’t measure color or spectra, it just stares and very precisely measures the changes in brightness of stars. You can learn a huge amount about stars just with their variability with brightness over time.

The Eclipsing Binary Working Group had to go through 155,000 light curves, and pick out the eclipsing binary stars. There are about 2,000 of them.

PS: You mean you did this by eyesight? How did you find them?

LD: There are all sorts of kinds of eclipsing binaries — there are detached ones, semi-detached, contact, ones that oscillate while they eclipse. To write an algorithm to encompass all of them was just too much, so we said, everybody, let’s bite the bullet. Our group of eight guys just started looking. We would look for a dip in the light curve, and a second dip, and say here’s a candidate. But it took us two years to look for eclipsing binaries before I could look for planets. We could basically glance at something and say it was an eclipsing binary, and I could find a few dozen a day.

Even 15 years ago, data was a problem; we couldn’t get enough data. Now astronomers are absolutely swimming in data.PS: Why are eclipsing binary stars useful to study?

LD: Almost all we know about the size of stars comes from eclipsing binary systems. They are too far away to see the size of their disks, but we can take spectra in an absolute scale. We can know how long they take to dim each other. And virtually all we know about planets outside the solar system comes from transits. When a planet moves in front of the star, we can measure the ratio of its brightness and get the size of the planet. Kepler-16b was a transiting planet in an eclipsing binary system. So it’s the best-measured planet outside of the solar system. We can measure the stars because it’s an eclipsing binary, and we can measure the planet because it is a transiting planet. It moves in front of both stars. So it was a real fortunate discovery, and it shows how precisely you can measure things even a couple hundred light years away.

PS: Why wouldn’t the single-star transit hunters want to look at these?

LD: When you look at light bulb, it’s brighter at the middle than the sides. As a planet goes in front of a star, it blocks out more light in the middle than it does on the edges. You can use that to determine whether it is grazing one of the edges. So when [transit-hunters] got a grazing binary, they noticed a transit wasn’t the same depth. They would get a deep dip and not-quite-as-deep dip. Transits shouldn’t do that, they should dip at the same depth each time. If they got a second dip, they would say it was a grazing eclipsing binary. But our group wanted them. [The transit-hunters] said, “It’s good to get a catalog so we can get rid of them,” and we said, “It’s good to have a catalog so we can look for circumbinary planets.” There was this friendly banter between the folks who wanted the eclipsing binaries and the ones who wanted to get rid of them. 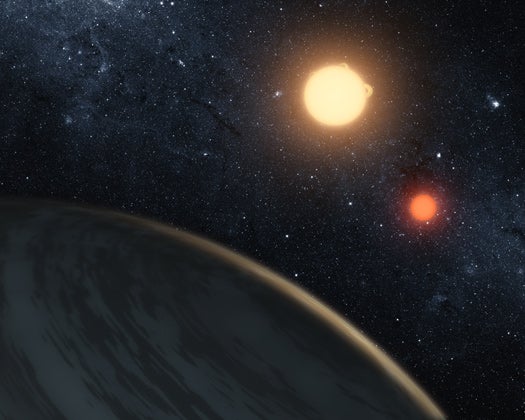 PS: How else could this discarded data be useful?

LD: We wanted to give the transit-hunters a probability, if it was a transiting planet or an eclipsing binary. So we were able to give them a false alarm rate — of the 1,235 planet candidates that were published, here’s how many were eclipsing binaries. We didn’t have enough time to take spectra of them all, so we released them to the community. But I would say over 90 percent are bona fide planets, at least. That more than tripled the number of planets around other stars.

PS: How did you determine the planet was present by just using light curve data?

LD: With a light curve, we have a curve showing brightness with time. The first thing we did with Kepler-16 is we noted that some of the dips were regular, some were shallow, and some were deep, so there must be a bright star and a faint star. We thought, maybe there’s an eclipsing double star in the background that happened to get in the same measurement, because Kepler has big pixels. If it was a background eclipsing binary, the curve will be deep, shallow, deep, shallow. But then the binaries switched places. It was a deep dip, shallow dip, shallow dip, deep dip. It was like, “Whoa.” How could it suddenly switch directions and go the other way? That didn’t make sense. But what did make sense was this was a circumbinary object. It goes across the big star, and then the little star, and all the way around them both. When it came back, it just happened that the little star was in front; it changed places.

PS: How can you be sure it’s a planet?

LD: The third object is going around the eclipsing binary, and it should be tugging on it every time it comes around. If it’s a stellar mass, it will tug on the components and change their orbital period, and we could figure out how much mass is required to change the period. So we looked at the times of the eclipses, and when the eclipses occurred, the timing change was only about a minute. So the eclipses were not a stellar mass, and we knew at that point we had a planet. Then at that point it was a matter of fine-tuning, and we found Kepler-16b.

PS: Do you think you’ll find others like this? What else are you looking for?

LD: Kepler is going to have to have an extended mission to find an Earth. We thought the sun was a typical star, but it’s not. The sun is particularly quiescent. Two- thirds of stars are much more active; they flicker more. There’s more noise. It’s like saying, I can recite the Gettysburg Address to you in two minutes, but the phone line is going CHHHRH. You’d say, “This is going to take at least 10 minutes because of the noise.” So finding an Earth is going to take longer, and we didn’t know that. But when you measure anything 100 times better than it has ever been measured before, there are going to be surprises.

For astronomers even 15 years ago, data was a problem. We couldn’t get enough data. Now astronomers are absolutely swimming in data — there is so much more data than astronomers can handle. To do database management, one way to do it is to invite your friends. I think citizen science is going to become more and more popular. It’s only limited by our imagination, how many people can participate in actually discovering stuff.