Book Review: The Transits of Venus Down The Centuries

Modern science moves so fast that it’s easy to reflect on the changes of the past week, let alone the... 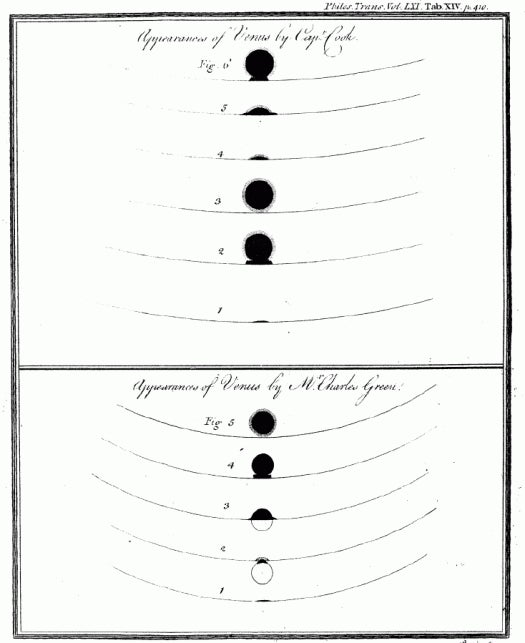 "Observations made by appointment of the Royal Society at King George's Island in the South Sea by Mr. Charles Green, formerly assistant at the Royal Observatory at Greenwich, and Lieutenant James Cook of His Majesty's ship the Endeavour.". Philosophical Transactions of the Royal Society, Vol. 61, p. 410, 1771.
SHARE

Modern science moves so fast that it’s easy to reflect on the changes of the past week, let alone the past decade or century. But astronomy is one notable exception to this rule. Arguably no other scientific endeavor is so full of history.

For this reason, astronomical events like the transit of Venus present a rare chance to compare what we can see today with what our forebears saw hundreds of years ago, both literally and in their world views. This is something you can’t really do with genetics, for instance.

On the occasion of this last transit, several authors have undertaken the retelling of the previous Venus transits, heralded in their day as a means to determine our place in the solar system and the rest of the cosmos. The 18th and 19th century transits of Venus are also surprisingly rich tales of swashbuckling explorers, politics, bitter competition and international cooperation. Here are two books we recommend. 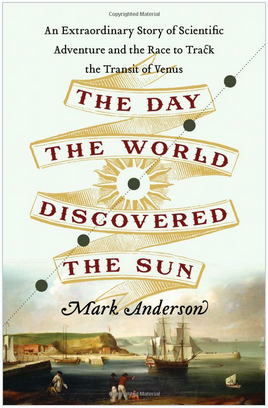 The Day the World Discovered the Sun

The Day the World Discovered the Sun

The aroma of rotting corpses may not be the first thing that comes to mind in a book about astronomy, but this is how Mark Anderson sets the stage for his tale of the June 3, 1769 transit of Venus. From the beginning, you are alongside the famous explorers, including James Cook, and the under-appreciated astronomers, including Jean-Baptiste Chappe d’Auteroche, as they risk life and limb to watch this event.

Anderson draws on his background in physics as well as a career writing about Elizabethan England to tell the story in occasionally overwrought yet sharp and stinking detail. (Fun Fact: One of the most important observers for the Holy Roman Empire was the Hungarian Jesuit priest Maximilian Höll, who Latinized his name to Hell — Father Hell. Fitting name for a guy observing a planet often compared to that devil’s bastion.) 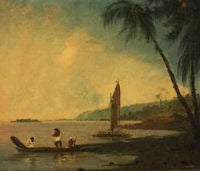 The view from Point Venus, Tahiti, where Capt. James Cook and his men observed the transit of Venus. Oil on canvas, William Hodges, 1744-1797.

This transit was key to determining the dimensions of the solar system. Kepler and others had already provided the geometry, but without a measuring stick like the Venus transit, no one had yet determined the exact size of the sun and the planets and the distances among them. By observing the transit from several locations, and timing Venus’ solar crossing with exacting precision, scientists around the globe could combine their notes and derive a precise solar system measurement.

But this required a new spirit of international cooperation, not an easy concept for superpowers like Spain and France. And it required far-flung observers hunkered down in the Arctic, sailing the waters of South Africa and Tahiti, and even dispatched to the New World. Together, the expeditions yielded a number that we now simply call the AU — 93 million miles, the distance between the Earth and the sun. Who knew it took suffering in Siberia and dying of distemper to figure it out? 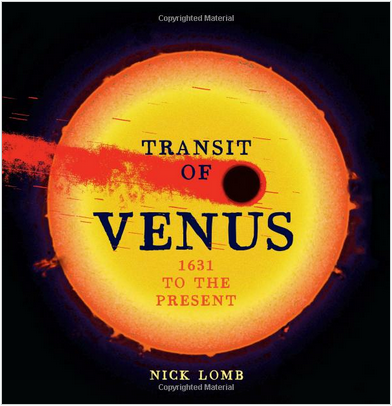 Transit of Venus: 1631 to the Present

Nick Lomb, former curator of astronomy at Australia’s Sydney Observatory, presents a gorgeous coffee-table-worthy color tome that works more as an introductory science lesson than a historical account. Scores of photographs, sketches, artists’ renderings and diagrams explain how astronomers of old were able to chart this transit, and why it was important then — and now. He also includes some interesting information about the hellish planet.

Lomb starts with the transit of 1639 — the first to be observed by humans, with modest telescopes projecting the solar disk onto darkened European walls. Kepler’s third law of planetary motion was barely older than a decade, and finally astronomers were beginning to use telescopes to answer some pressing questions about the solar system. Kepler’s third law: The square of a planet’s orbital period is directly proportional to the cube of its distance from the sun. This meant that once you could detect one planet’s distance to the sun, you could detect them all. And Kepler figured out that Mercury and Venus were likely to cross in front of the sun. He predicted a transit in 1631, and exhorted astronomers to watch it carefully. Kepler himself died in 1630.

Throughout the book, the story of each observed transit is interspersed with little biographies of the key astronomers, maps detailing the routes traveled by explorers like Mason and Dixon (for those of you who know the Civil War, yes, they’re the same guys), and interesting physics behind the observations. He even includes Jay Pasachoff’s groundbreaking finding about the frustrating Black Drop, a dark thread that connects the shape of Venus to the sun and makes it difficult to determine the exact point of transit. The Black Drop is an artifact of atmospheric blurring, telescope effects and the solar disk itself.

You can find both books on Amazon and in most booksellers.

Click here to find out how you can watch Tuesday’s transit yourself, and join the ranks of those gone before us who stared at the sun and learned something new.