Discovered: The First Earth-Sized Worlds Outside Our Solar System

The smallest exoplanets yet 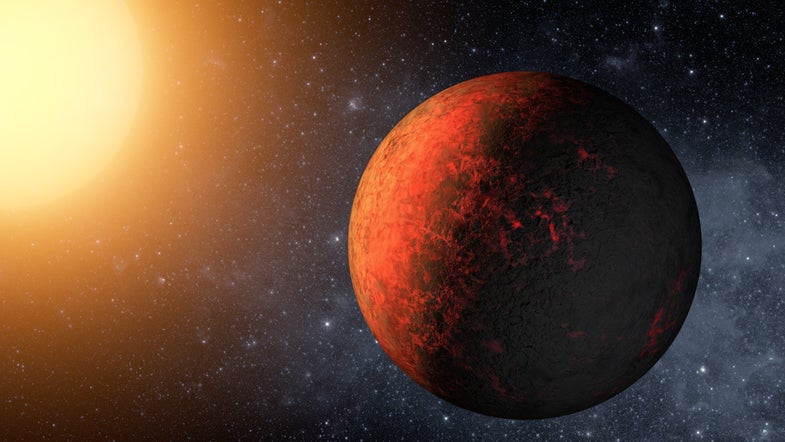 Two small, scorched Earth-sized worlds orbiting a reddish sun-like star in the Cygnus constellation mark yet another milestone for the storied Kepler Space Telescope mission. They’re the smallest exoplanets found to date — one of them is just 1.03 times the size of Earth, a veritable body double.

The planets aren’t in their star’s habitable zone, but they are the right size — and as such, they fill in even more of the interstellar planetary puzzle.

The planets exist in a strange configuration that sandwiches them among three gas giants, and they’re all well within the orbit of Mercury. They were buried in nearly two years of data, and astronomers had to use some ultra-refined computational techniques to be sure they’re really planets.

One of the planets, Kepler-20f, could potentially harbor a water-vapor atmosphere, although astronomers don’t know for sure. What they do know is that it’s just barely bigger than our own planet (and only slightly more massive).

“It is the closest object to the Earth that we have seen in the universe,” said Francois Fressin of the Harvard-Smithsonian Center for Astrophysics, lead author of a paper on the new worlds. 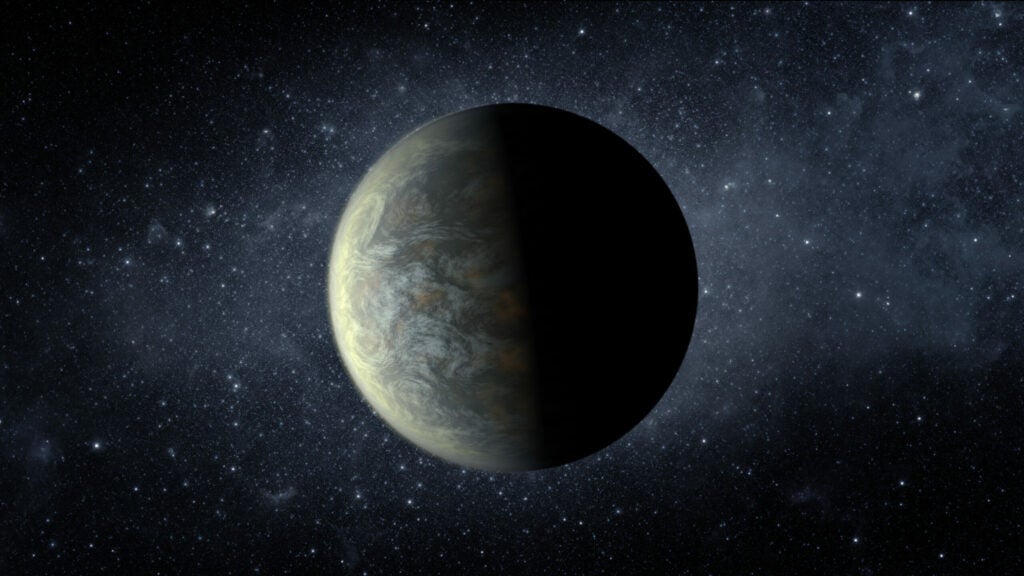 This world is 1.03 times the size of Earth, the closest to our own planet’s size of any exoplanet yet discovered. It has somewhere less than three times Earth’s mass. It’s just 10.3 million miles from its star (we’re 93 million from ours) and as such makes an orbit in just 19.6 days. Its surface temperature is about 800 degrees F, but astronomers believe it may have held on to a water-vapor atmosphere.

Both planets orbit around a star called Kepler-20, a G-type star slightly cooler than the Sun, located 950 light-years away. (It would take the space shuttle 36 million years to travel to Kepler-20, as the CfA helpfully points out.)

Based on their size and location around their star, the planets might have a very Earth-like composition, Fressin said in an interview. Their proximity to Kepler-20 exposes them to prodigious doses of radiation, and they’re too small to have held on to lighter elements like hydrogen and helium in the face of those stellar winds — so the evidence would suggest that they’re rocky. It’s just a matter of the ingredients, whether they have significant amounts of iron or silicate.

The planets could not have formed where they’re currently located, and must have migrated inward, he said. It’s possible that earlier in its life, Kepler-20f had an atmosphere with significant water vapor, which would make it habitable, at least according to most planetary habitability indices.

“If it indeed migrated from the outer solar system, it could have been habitable in its earlier history,” Fressin said. 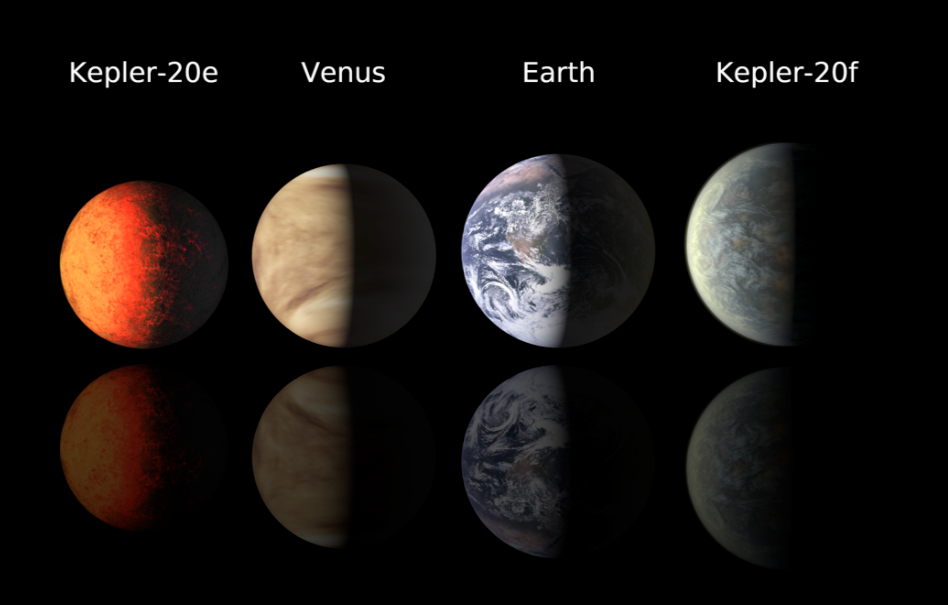 The discovery comes on the heels of a major data dump by the Kepler team earlier this month, which also included the news of the first Earth-like world orbiting in an Earth-like place around its star. That planet, Kepler-22b, is much bigger than Earth, but exists in a temperate zone just right for liquid water to exist. It may not have a rocky surface, however. These new planets are too hot for water, but they’re much more Earth-like in rocky form and smaller size.

“I think of Kepler-22b on one side, and Kepler-20e and 20f on the other, as two pieces of the puzzle,” Fressin said. “We need to combine the finding of an Earth-sized planet in a habitable zone.”

Kepler was designed to look for blips in brightness across the faces of 144,000 stars in the constellations Cygnus and Lyra, aiming to find sun-like systems harboring Earth-like planets. In its two years of operation, the cosmic census has mushroomed to more than 2,000 worlds, including super-Jupiters, super-Earths, inky black light- and heat-absorbing worlds, and many more. But the hunt for an Earth twin has proven difficult. Part of the problem is criteria — an Earth analogue would need a similar size, location, composition, rotation and many other factors to be truly Earth-like, Fressin said. Take Kepler-22b: It’s the right temperature, but it’s 2.4 times the radius of Earth, so it has much more volume.

“I don’t foresee us finding a true, clear Earth twin very soon — there are so many different levels,” Fressin said. “Maybe we don’t only need a planet in a habitable zone and at the right size, but the star similarity. If we don’t know what is in the atmosphere, or we don’t have any constraints on the atmosphere, how can we say it has the right signature to be an Earth twin?”

These planets are arrayed in a very strange system, alternating between rocky and gassy, which is unlike anything astronomers have ever seen, said co-author David Charbonneau of the CfA. He challenged his fellow astronomers to help him explain it.

“The freshmen in my class are going to be quick to point out that the model of our solar system formation is deeply challenged by the discovery that is being presented today,” he said.

Their small companions were difficult to see because of their size, and previous attempts to spot them were unsuccessful, Fressin explained. Astronomers had seen some blips they thought might be transiting planets moving across the face of Kepler-20, but an analysis a year ago couldn’t rule out other possible sources. Additional data from the space telescope and additional calculations by Fressin and colleagues led to the final eureka moment.

When a planet moves across the face of its star, the star dims a tad, and this is what Kepler is designed to notice. Scientists have to rule out other possible causes like a background star, a brown dwarf, an eclipsing binary, and so on. To confirm planets’ existence, astronomers check for a tiny wobble caused by the planets’ gravitational pull. This can be verified from the ground, using the huge Keck telescopes in Hawaii. But in this case, the new planets were too small for these ground-based verifications.

Fressin used software called Blender, which he developed with CfA astronomer Willie Torres (and which has also been used to verify other planet findings, including Kepler-22b). Fressin and nearly 30 collaborators used Blender to run millions of simulations, and were able to rule out any other source of dimming other than the putative planets.

This is neat, because as astronomers enter this new mass range of planets — little worlds the size of Earth or smaller — they’ll need sophisticated analysis to verify what they’re seeing. This paper combines a new computational technique with the old, pre-Kepler technique of checking for stellar wobble.

The study appears online today in the advance online edition of the journal Nature. 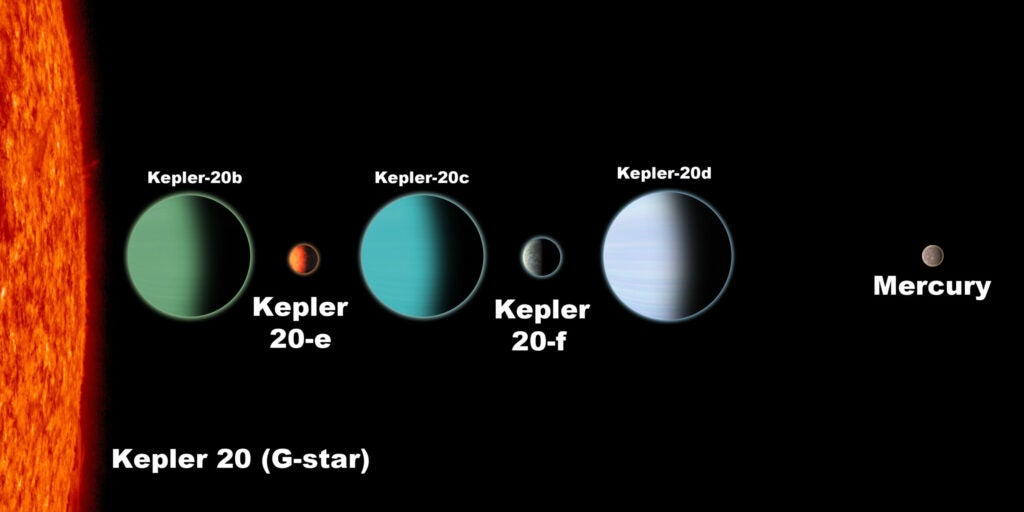 The planets of the Kepler-20 star system are arranged in a bizarre pattern, with small, Earth-sized and probably rocky worlds sandwiched between gas mini-giants. This system of flip-flopping planets is very different from other solar systems discovered thus far. The planets could not have formed in their current locations, but must have migrated inward, probably through gravitational interactions with the dusty gas disk from which they were born. They orbit their star very tightly, closer than Mercury is to our sun.