In a cosmic first, the Kepler telescope has discovered two planets sharing the same orbit. There is a theory that... 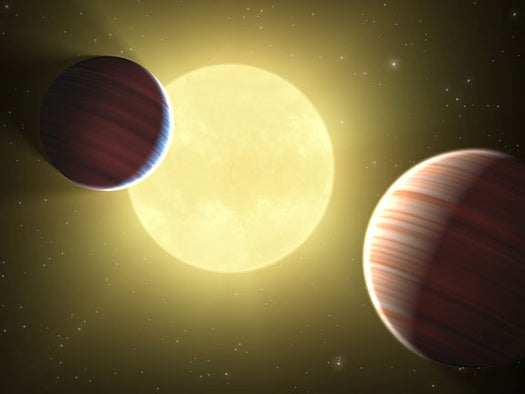 In a cosmic first, the Kepler telescope has discovered two planets sharing the same orbit. There is a theory that says our moon was created when a body sharing our orbit crashed into Earth, but up until now no one had found evidence of co-orbiting planets elsewhere in the universe.

It is possible that such a phenomenon could occur when matter around a newborn star forms into planets. In a planet’s orbit around a star, there are two places where a third body can safely orbit. These spots, known as Lagrange points, are 120 degrees in front of and behind whichever body is smaller. The discovered co-orbiting planets, located in the four-planet system KOI-730, are always 120 degrees apart, permanent fixtures in each others’ night skies.

Fifty million years after the birth of our solar system, the moon may have formed from the debris of a collision between Earth and a Mars-sized body named Theia. For this to be true, Theia would have to have hit earth at a relatively low speed. Richard Gott and Edward Belbruno of Princeton University say that this could only have happened if Theia had originated in a Lagrange point. The discovery of the KOI-730 planets shows that it is possible.

Maybe someday these co-orbiters will collide and form another moon. But it won’t happen for some time, as simulations show that the planets will continue to share their orbit for at least 2.22 million more years.