Combing through the night sky and looking for possible planetary nebulae is tough, tedious work. NASA actually works with several... 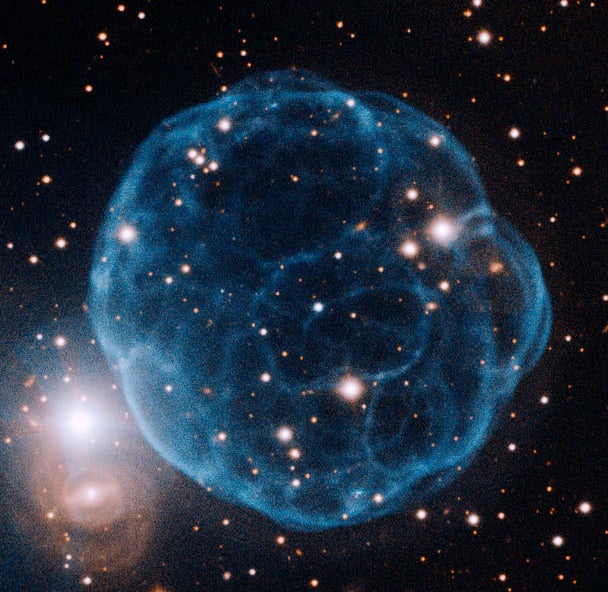 Combing through the night sky and looking for possible planetary nebulae is tough, tedious work. NASA actually works with several amateur astronomy groups to examine the findings from its Kepler space observatory, so sometimes, the big discoveries are made by amateurs–including this one, the newest known planetary nebula, named Kronberger 61.

This image, provided by the Gemini Observatory, shows the “ionized shell of expelled gas,” colored blue due to the double-ionization of the oxygen. If you look closely, you can see the star at the center of the system–it’s the bright bluish dot near the center of the blue-raspberry-like shell.

The Kepler mission’s goal is to find Earth-like planets, so the discovery of a new planetary nebula opens up the possibility for some exciting new discoveries. It’ll take a lot more examination to find out if there are any “Goldlocks planets,” close enough but not too close to a star to foster the kind of life we have on Earth, but the discovery certainly opens the door for that kind of study.

The star was discovered by, and named for, an amateur Austrian astronomer named Matthias Kronberger, who works with a group of other amateurs known as Deep Sky Hunters.