Q&A: How to Rate the Habitability of Other Planets

What's the most habitable planet? 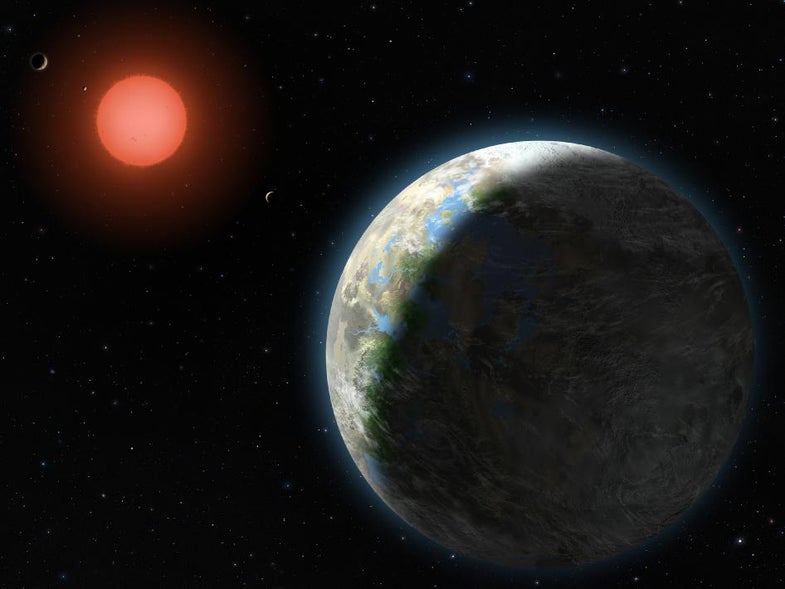 These days, every exoplanet discovery is still rich with excitement, as astronomers scrutinize each distant world and consider its possible characteristics. But this could get tedious pretty soon, as the number of confirmed exoplanets climbs into the thousands. When that happens, astronomers and especially astrobiologists will have to start sifting planets according to their interestingness. A new paper to be published next month describes a new two-step ranking system to make this process easier. We spoke to astrobiologist Dirk Schulze-Makuch to get some details.

Unlike other astrobiology criteria, this new system doesn’t assume that habitability only applies to a rocky place with liquid water. Dirk Schulze-Makuch, first author on the new paper and an astrobiologist at Washington State University, said the team wanted to be as open-minded as possible.

Their proposed Earth Similarity Index looks at the size, density and orbital distance of a planet or moon, as well as its star’s size and temperature, and compares these with Earth. The companion Planetary Habitability Index is based on the presence of some type of stable substrate, an energy source, appropriate chemistry, and the potential for holding a liquid solvent, not necessarily water. Both use a scale from 0 to 1.

So what’s the most Earthlike habitable place (other than here) in the cosmos? In the burgeoning exoplanet pantheon, it’s Gliese 581d, with an index of 0.74. The PHI has some different results, with the best option apparently Titan, with an index of 0.64. Mars rings in at 0.59, incidentally.

These numbers are only as meaningful as the data used to inform them, however, so the researchers stress there’s room for updates and improvements.

PopSci talked with Schulze-Makuch to get some more details about the twin indices and how they could help astronomers make intergalactic classifications.

PopSci: Why do you think there are several habitable exoplanets?

Dirk Schulze-Makuch: Right now, the exoplanets we have discovered are still heavily biased toward gas giants, because they are easier to detect. But the longer we research, we are getting closer and closer to Earth-like planets. Most of them are still super-Earths.

One planet I am quite excited about is Gliese 581d, which is about 10 times the mass of Earth. It’s in orbit around a red dwarf, so it is a sun that isn’t as bright as our sun. It orbits closer to the central star, but if you put it in our solar system metrics, it is in an orbit basically like Mars. Mars is pretty small compared to Earth, but if Mars, in our solar system, was 10 times the mass of Earth, and still had a magnetic field and a thick atmosphere, it would have liquid water oceans. And in that way, it would be a habitable planet.

The point of the scheme that we came up with is really to prioritize and categorize, of the many exoplanets that are already discovered and will be discovered. We have now more than 700 confirmed exoplanets, and about 1,500 unconfirmed. And the count will be in the several thousands very soon. Since we only have limited resources, especially in these dark budget times, we really have to think about where we put our resources. What planets are interesting for life, and what planets do we want to study?

Within our solar system, you only have about 15 planetary bodies that are interesting from an astrobiology perspective, really. But we are finding so many exoplanets, we really have to pool our resources. Some of those are actually relatively close by. The Gliese 581 system is 20 light years away. It’s far away, but that’s not that far, in the overall perspective, so this is something that really should interest us.

So how does this new classification scheme work? Why does Titan look better than Mars?

We propose two indices. One is an Earth Similarity Index, that is based on size, and how similar that planet is to Earth. The second is a Planetary Habitability Index. There, we take a different approach, to be very open-minded. There could be planets that are not in the traditional habitable zone, meaning Earth-like orbit where water could be in its liquid form. In this index, [Saturn’s moon Titan] comes out above Mars.

The reason is because Titan has a relatively thick atmosphere, composed of nitrogen and methane. It’s actually very close to the early Earth. Titan has hydrocarbon lakes, so you have your liquid solvent, but that solvent is not water. Hydrocarbons as a solvent may be a possibility. We know carbon works very well for organics, and there are a lot of complex carbon compounds on Titan, so that is something we have to look at.

Another example is Europa — we have a liquid ocean, as NASA announced last week, under the ice on that moon.

What does habitability actually mean? How do you define something like that, which is all relative to the place you’re studying?

There are several parameters. One, for example, is whether a planet has an atmosphere. That it has carbon on it. We will look for nitrogen and phosphorus. Whether it has a magnetic field to protect it from cosmic radiation. Whether it has any liquid solvents on its surface that are stable there.

With that kind of categorization, we purposely are not Earth-centric. We are not saying there has to be liquid water, or it has to be in an orbit like Earth is around the sun. We look for organic compounds, but it’s not that it has to be amino acids or anything.

One of our parameters is to have places where organisms could still do photosynthesis. Here, in our solar system, that extends all the way from Mercury to Saturn. Obviously, Earth, Mars and Venus are in a more suitable zone, but it could theoretically be to Saturn. So if you had a brown dwarf that has less light output, the planet has to be closer where you would still get enough light for photosynthesis. We tried to be as open-minded as we can.

As the Kepler Space Telescope (and the Corot Telescope) have made more exoplanet discoveries, we’ve started to think more carefully about what life might look like if we do ever find it. Seth Shostak at the SETI Institute has even suggested that we look not only for intelligent biological systems, but intelligent machines. Does your new system take any of that into account, planets that could harbor intelligent life or machines?

Our approach is life in general. In a previous version of the paper, we did have a biological complexity index. For certain complex microscopic life, we defined parameters, and said this is a planet that might have more complex life on it. But we thought this was really too speculative. On the microbial or generic level, we have a much better idea, so it would be easier to just make a general habitability index.

For Earth, for some kind of outside observer, it would be very difficult to detect any kind of spacecraft. They are too small. But what you would detect would be ozone and methane, and those compounds are not stable. They have to be constantly reproduced. If they would not be reproduced, you would have carbon dioxide out of those compounds. But we do measure ozone and methane, and that means there is some equilibrium, and there is something produced. This is a generic biosignature for life.

It could work for intelligent life, too, but what if you had something like this planet but 5 million years ago? You could have complex life, but not intelligent by any means. 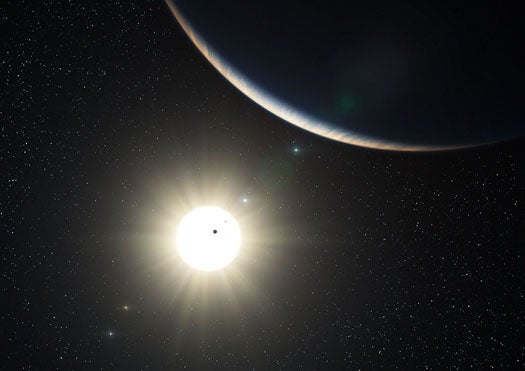 What are some potential drawbacks of this new classification?

DSM:One thing that we cannot do is study the planetary history of a planet. We always see ti at a specific time. This is especially important with Mars. Current Mars, in its planetary habitability, is below Titan. But ancient mars, 500 million years after its formation, had an ocean on it, as it looks. There was sediment, there were flowing rivers. At that time, it still had a magnetic field, it still had a thicker atmosphere. So ancient Mars would have scaled a lot higher up on that index. But this we cannot know from any exoplanet that we look at right now. Mars is still reasonably high, but it used to be higher in the past, and from this we can infer that there is a good chance that there is still life on Mars. But with exoplanets we cannot do that.

We just want to make sure that no favorable target falls in the cracks. If the people who discovered exoplanets say, ‘OK, this one was not in an Earth orbit, so by default this has no chance’ — we want to have objectively some kind of parameter, where you might say, ‘This is not an Earth-like planet, but this is still a very interesting planet for some exotic life form that could possibly exist on there.’

When do you think we’ll find life on other planets?

I think the discovery will be in our solar system first, and I think Mars and Titan are the two places where the chances are the highest. Mars is probably most likely because of its history and its closeness to Earth. We know there are asteroids that can travel between the two planets. If we know there was life on early Earth, and Mars was very conducive to life, there should be life on Mars, we just have to find it and confirm it.

With Titan, it’s more of a long shot, but would be even more exciting. If we do find life, it would be exotic; it would be very different from our biochemistry. Titan has these ethane and methane lakes, it’s just so different. It would mean probably that there was a separate origin of life. For me, that would be the most exciting thing. On Mars, it would still be very exciting, but you can only say something about early evolution of life; you can’t say something about how common life is in the universe and how different it may be.

With exoplanets, we may find some biosignatures. But at these great distances, it will be very difficult to confirm. If you do astrobiology you really have to get up close and personal. I can’t see how that would be done, unless it was an intelligent civilization that was sending us signals or something like that. But you can say, ‘That is a planet that is very conducive to life.’ Whether there is life or not will be incredibly difficult to prove.