Nearby T Pyxidis Supernova Could Destroy Life on Earth 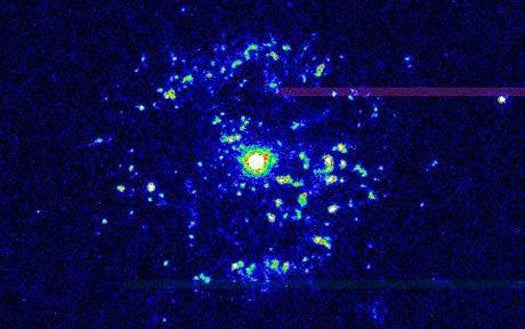 Doomsdayers and 2012 blog-keepers, take note. Astronomers at this week’s American Astronomical Society meeting revealed that a massive white dwarf star in the throes of multiple nova is much closer to our solar system than once thought. When it does finally collapse into a type Ia supernova — okay, if it collapses into a type Ia supernova — the resulting thermonuclear blast will destroy life on earth. Seriously.

The star is part of a binary system of two stars — a white dwarf that leaches mass off its sun-like neighbor — called T Pyxidis, located in the southern part of the constellation Pyxis, also known as “The Compass Box.” The system is known as a recurrent nova because it has been subjected to repeated novas over the last century, suffering (relatively) small thermonuclear explosions in 1890, 1902, 1920, 1944 and 1967, or nearly every twenty years.

It’s now been over 40 years since that last nova in 1967, and meanwhile the white dwarf continues to swell, feeding off its neighbor. If it continues to swell, it could eventually reach the Chandrasekhar Limit, a critical mass at which point instantaneous gravitational collapse would occur causing a thermonuclear blast akin to 20 billion billion billion megatons of TNT.

Given that scientist have recently found that T Pyxidis is but 3,260 light-years away from us — a neighbor by cosmic standards and much closer than previously thought — that kind of epic explosion would not be good for the stellar neighborhood. The Gamma radiation that would reach Earth would be equivalent to 1,000 simultaneous solar flares bombarding the planet. The resulting production of nitrous oxides in the atmosphere would also completely destroy the ozone, at which point we can go ahead and say the planet would be uninhabitable.

But the fantastic scale of the cosmos that allows such massive, cataclysmic events to unravel also bears a silver lining for those of us on Earth (2012 believers, stop reading now). Though in terms of star life supernova is likely around the cosmic corner, it’s estimated to happen many millions of earth years from now, a full 10 million years by some estimates. Suffice it to say that we’re far enough from T Pyxidis that we can’t really tell exactly how big it is or how quickly it’s accreting mass. But the end of the world isn’t coming tomorrow. Or even in two years.