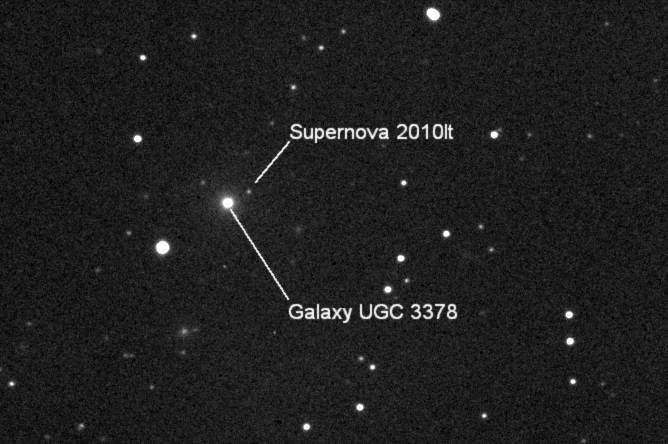 Here’s a good argument for letting your kids stay up late: A 10-year-old Canadian girl discovered a supernova over the weekend, the youngest person ever to do so.

Kathryn Aurora Gray of Fredericton, the capital of New Brunswick, made the discovery under the supervision of two other amateur astronomers, according to the Royal Astronomical Society of Canada.

Kathryn, Paul Gray and David Lane snapped a photo of a galaxy in the constellation Camelopardalis on New Year’s Eve. The supernova was discovered on Sunday, Jan. 2, while Kathryn and Paul Gray (unclear whether this is her dad) examined the picture. It is Kathryn’s first supernova find, Lane’s fourth and Paul Gray’s seventh. American amateur astronomers confirmed the discovery.

Supernovae are the death throes of exploding stars many times larger than the sun. They suddenly appear as bright points where no star had been observed before. Big, nearby ones can be seen with the naked eye, and they’re even easier to spot with amateur telescopes. The youngest one in the Milky Way happened about 140 years ago and is located about 26,000 light-years away. The new supernova is about 240 million light-years away, CBC News reported.

Camelopardalis, the giraffe, is a large but faint constellation in the northern sky. The supernova occurred in the galaxy UGC 3378.

There’s no word on whether Kathryn’s middle name is an homage to the northern lights, but it seems fitting, doesn’t it?