A Treasure Trove of Dinosaur Protofeathers, Trapped in Amber

A cache of feathers preserved in amber, dating from around 70 to 85 million years ago, was just found in... 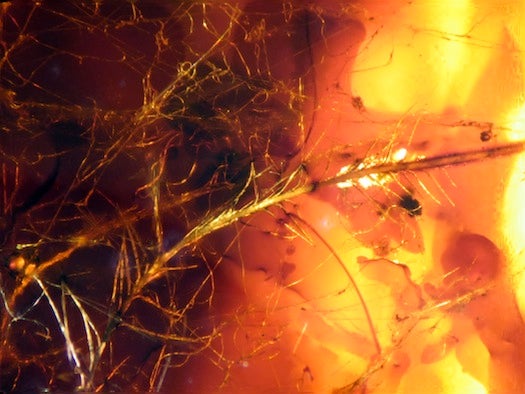 This picture shows a barb, judging by the pigments found in it probably black or grey. That mess of tangles that looks like a spiderweb? That's a spiderweb. Science/AAAS
SHARE

A cache of feathers preserved in amber, dating from around 70 to 85 million years ago, was just found in Canada, showing that border between winged dinosaurs and the earliest avians. The study indicates that these feathers, relatively modern, were already appearing even before the non-avian dinosaurs were extinct.

Click to see some amazing photos of feathers trapped in amber.

Some other tidbits: The researchers can even tell if the feathers were colored or not, due to the amount of pigment cells preserved thanks to the amber. So far as they can tell, the feathers had a range of color, from solid to mottled to transparent. It’s not immediately clear which feathers belonged to early birds and which to non-avian dinosaurs, but the level to which they’re similar to even some modern birds like the relatively ancient grebe is pretty striking.

The study can be read in full in tomorrow’s issue of Science.

This picture shows a barb, judging by the pigments found in it probably black or grey. That mess of tangles that looks like a spiderweb? That’s a spiderweb. 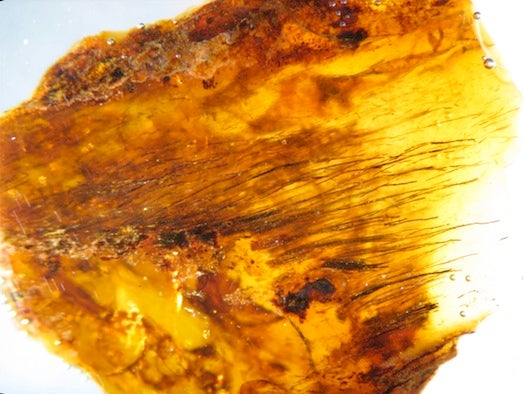 Seen here are the filaments of an individual feather. These feathers are morphologically similar to those of other non-avian dinosaurs. 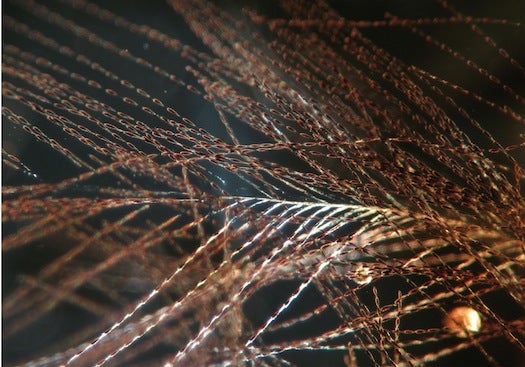 This is one barb from the white belly feather of a modern grebe, a freshwater diving bird originally thought to be related to the loons but now thought to be totally separate, an example of a comparatively ancient type of bird–and one that’s quite similar to those found in this new cache. 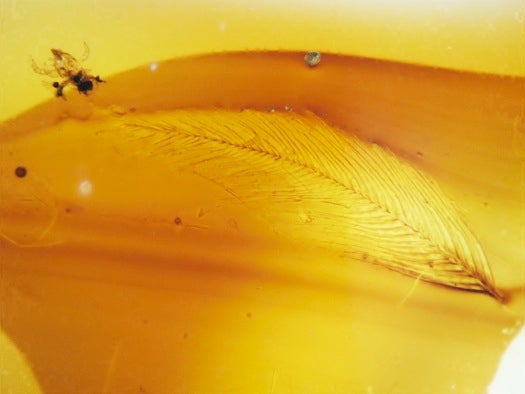 Here you can see an isolated feather barb, and how similar it is to that of the grebe shown in the previous slide. There’s also a mite in this photo!

This one’s kind of complicated, so I’ll let Science explain it: “Cross-section through a feather with basally-coiled barbules, accompanied by a microphysid plant bug. The helical coiling observed within these barbules is most obvious in isolated barbules within the image, and is directly comparable to coils found in modern bird feathers specialized for water uptake. The high number of coils in the amber-entombed feather is suggestive of diving behavior, but similar structures are also used by some modern birds to transport water to the nest.” Phew!
Dinosaurs
fossils
North America