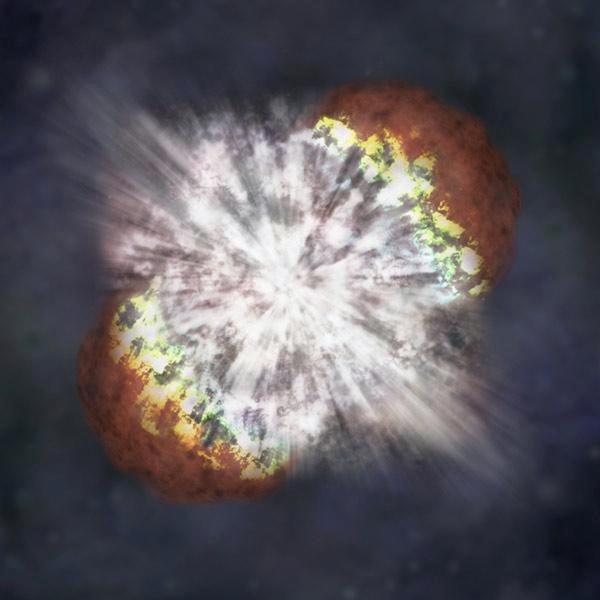 Stars don’t tend to go quietly, and the most massive of them all create a supernova explosion 50 to 100 times brighter than normal. Now astronomers have confirmed the existence of rare but huge stars that contain 200 times the mass of our sun, after spotting one unusually bright cosmic explosion in 2007.

The supernova, called SN2007bi, remained visible almost two years after its first discovery — a very unusual bonus for astronomers. A team has since analyzed the star’s signature and published their findings in the Dec. 3 issue of the journal Nature.

Turns out that the huge explosion represents a pair-instability supernova, in which a star has mostly run out of hydrogen and helium and only has a core of oxygen. Smaller stars consume that core until only iron remains, and then collapse into a Type II supernova that leaves a black hole or neutron star. Even tinier dwarf stars undergo a Type Ia supernova, which astrophysicists recently modeled in 3-D.

But the behemoth had a much different fate. During the oxygen core phase, it released high-energy photons that created pairs of electrons with their antimatter cousins, known as positrons. The mutual annihilation of matter and antimatter led to a rapid collapse that set off a nuclear chain reaction in the oxygen core, and eventually consumed the entire star.

Astronomers told SPACE.com that the confirmed discovery now puts to rest previous doubts about whether such massive stars could exist. Apologies to the Imperial Death Star, but it’s way out of its league.