Despite moving at 18 miles per second, it still takes the Earth a year to make it around the Sun.... 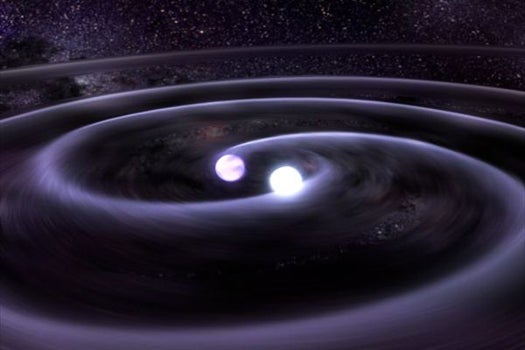 Despite moving at 18 miles per second, it still takes the Earth a year to make it around the Sun. For HM Cancri, an orbit takes a little bit less time: around five minutes. At that speed, HM Cancri is the fastest binary star pair ever discovered, with each white dwarf circling the other at a speed of 310 miles per second.

Initially, scientists were shocked that a solar pair could spin so quickly, and assumed it was a single, larger star whirling about. However, more recent studies that utilized Earth’s second most powerful telescope found that the system wobbled more than expected from a single star. The only other explanation was a tightly bound pair of small stars.

Not only is HM Cancri the fastest binary star system every discovered, but it is almost the fastest binary star system possible. If they orbited each other any more quickly, say, on the order of three minutes per orbit, the stars would pull so close that they would begin siphoning helium off one another. At that point, the system would experience a special kind of supernova. The resulting blast would then slow down the system. So it looks like, even in space, speed kills.