In literature and folklore (and video games, sometimes), the blue rose signifies the impossible, or mystery, or the unquenchable. It’s... 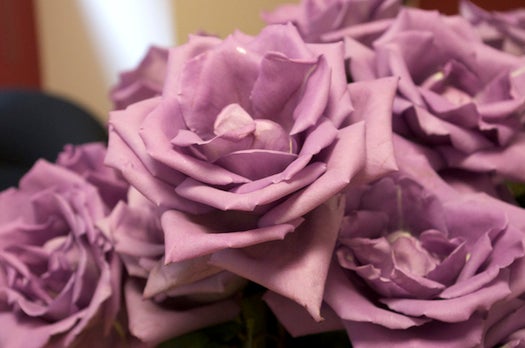 In literature and folklore (and video games, sometimes), the blue rose signifies the impossible, or mystery, or the unquenchable. It’s not much of a leap, really; roses are ubiquitous, but due to a genetic barrier, a blue rose is naturally impossible. Of course, there’s no particular reason to do what that meddling bully nature wants us to do, so a Japanese company has genetically modified a rose to create…well, it’s not quite blue, but it’s certainly closer than any previous effort.

Suntory, a Japanese company best known for its alcoholic beverages, has genetically modified a rose to give it an all-over color probably best described as lavender. The problem: roses lack a natural plant pigment known as delphinidin, which gives certain types of flowers, like geraniums and pansies, a blue color. Roses do not naturally have this pigment, but in 2004, Suntory finally managed to introduce a gene for blue pigment from a pansy into a rose. We’re no stranger to genetic modification, but this is the first time we’ve seen a mythical symbol created through the technique.

When I asked Yoshikazu Tanaka of Suntory what the inspiration for the project was, he said “The company wanted us to do something difficult, something nobody had achieved,” and what project could be more difficult than an international symbol for impossibility? Of course, the rose really isn’t “blue,” though it is pretty, so I tried to politely ask if this was the color the team was going for. Mr. Tanaka told me that “every flower has its own way to be blue, with many different pigments. This is our first step: We will keep adding more pigments [to make the flower] more blue.”

The rose, which Suntory has named “Applause,” is now available in North America at select florists, tailor-made for the next impossible goal you achieve. Suntory’s explanation for the name? It serves “as a symbol of congratulations for those whose dreams have come true, as well as of encouragement for those pursuing a dream, whatever it may be.” Sniff. Go get ’em, blueish rose!