Some serious space weather at play. 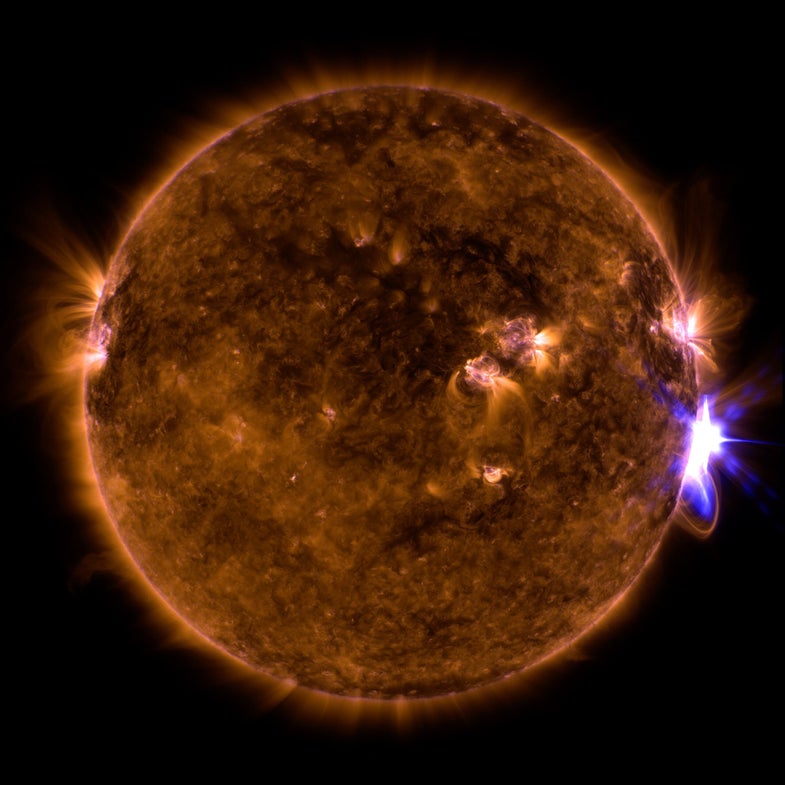 Explosives going off without warning is bad news for… well, for everybody. So imagine the U.S. military’s alarm when, on August 4, 1972, it witnessed about two dozen or so spontaneous explosions in the waters off Hon La in North Vietnam. America’s Operation Pocket Money had dropped underwater mines there many weeks before to deter trade ships from venturing to North Vietnam ports. But the mines were only supposed to detonate when ships were around, and Americans surveilling the water from overhead were only seeing clear blue when the bombs went off.

Initially, the explosions were inexplicable. What could have possibly set the mines off? Big marine animals? Equipment malfunctions? Were the North Vietnamese using a secret strategy to blow up the mines remotely?

Over four-and-a-half decades later, we now know the culprit was the sun. According to findings recently published in the journal Space Weather, a powerful solar storm likely triggered the mines’ magnetic sensors and caused them to explode.

“It was a storm of magnificent proportions,” says Delores Knipp, a space weather researcher at the University of Colorado, Boulder and the lead author of the new paper. “It was a big story back in the day, and continues to be a big story.” The storm occurred in between Apollo missions 16 and 17, but it’s generally accepted that the radiation dose would have incapacitated (if not outright killed) astronauts traveling to and from the moon. In addition, other studies on the solar storm found the resulting geomagnetic current created many different power fluctuations in North America. “It’s been a storm that has been known for different effects in different communities.”

On that day in 1972, over the course of 30 seconds, American troops flying near North Vietnam witnessed between 20 and 25 explosions in the water, along with an additional 25 to 30 mud spots. Those mines use sensors to detect changes in the surrounding magnetic field density, changes that would normally be triggered by a ship passing above.

But something clearly went wrong. Just days after the occurrence, U.S. military officials were already wondering whether solar activity may have precipitated the detonations. At the time, the world’s scientists already knew the sun was capable of producing changes in magnetic fields, but they were not certain whether solar activity reaching the Earth was powerful enough to trick the mines’ sensors. Eventually, investigators working with the military and NOAA would quietly conclude solar activity was probably the blame, but the case was not completely resolved.

Armed with more a more current understanding of solar activity, Knipp and her team dug into now-declassified documents and found that the 1972 event was a uniquely strong solar storm, and several factors augmented its effects as it hit Earth.

Several hours before the bombs went off, the sun began to flare up and experienced what’s called a coronal mass ejection—a large vomit of a high-energy plasma and radiation particles that carry electromagnetic pulses along the way. It normally takes a day or two for those pulses to reach Earth, but in this case, previous blasts from two days prior essentially plowed through the interstellar medium, clearing up obstacles and paving a polished way for the August 4 ejection. The pulses ended up hitting Earth in less than 15 hours, and rattled our magnetic covering with unusual force.

In fact, according to Knipp’s research, the August 1972 storm was on par with the Carrington event from 1859, one of the most powerful solar storms ever recorded. “It’s our poster child of storms,” says Knipp. “If a storm that bad were to appear again, then we would really have a lot of problems.” Our current world is immensely tethered to communications instruments, electrical grids, and technology that can easily be fried by particularly strong bursts of solar activity.

Which begs the question: how often do storms like these occur? Underwater mines going off randomly is already a scary possibility to bear, but a loss of $40 billion a day to the U.S. economy is simply unthinkable.

There’s no straight answer to that—after all, the entire field of space weather is a work-in-progress toward this goal. For example, breakthroughs in the last decade have helped illustrate how coronal mass ejections can occur in series rather than just as discrete events, which helped the team pinpoint why solar activity might be powerful enough to set off a couple-dozen underwater mines.

But Knipp says a general estimation, based on current knowledge, is that these sorts of solar storms hit Earth about once every 70 years—”often enough that we need to be thinking about what types of technologies are subject to harm in these kinds of environments.” The question isn’t really if a storm powerful enough to knock out the power grid and wreck our technological equipment will hit us—but when it will happen, and whether we’ll be ready in time to prepare and safeguard our infrastructure.